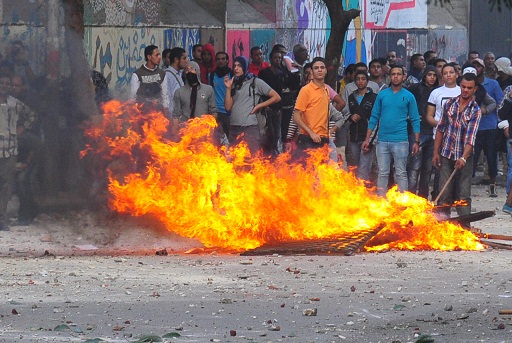 Morsi says Israeli ‘aggression’ to end Tuesday
Egypt’s President Mohammed Morsi said Israel’s "aggression" against Gaza would end "today, Tuesday" and Egyptian-mediated efforts will produce "positive results" in several hours, the official MENA news agency reported. "The farce of the Israeli aggression will end today, Tuesday, and the efforts to reach a ceasefire between the Palestinians and Israelis will produce positive results within a few hours," it quoted him as saying. During a phone call yesterday to President Mohamed Morsi, US President Barack Obama underscored the necessity of Hamas ending rocket fire into Israel. [AFP/Ahram Online, DNE, Reuters, EGYNews (Arabic), 11/20/2012]

Brotherhood leader sees US, Israeli role in Sinai instability
A senior leader at the Muslim Brotherhood’s Freedom and Justice Party said there are “clear indications” the US and Israel have played a role in the crises in Sinai and Gaza. “In the past, we used to inquire about the roles of [former chief of intelligence] Omar Suleiman and [former interior minister] Habib al-Adly, but now, with crises in Sinai and Gaza, I am looking for the role of [Israeli home front minister] Avi Dichter and [US Ambassador to Egypt] Anne Patterson,” Mohamed al-Beltagy, a former MP and a member of the Constituent Assembly, wrote on his Facebook page Tuesday. [Egypt Independent, 11/20/2012]

Justice ministry freezes assets of Ahmed Shafiq
The financial assets of Ahmed Shafiq and his three daughters have been frozen by an order of the justice ministry. The Mubarak-era prime minister and his daughters, Sherine, May and Amira, were placed on an airport watch list and forbidden from disposing of their stocks, bonds and wealth. The decision was made by the vice president of the Cassation Court and the assistant justice minister for illicit gains. It confirms the decision of the Illicit Gains Authority in October to freeze the assets of Shafiq and his daughters. [Ahram Online, Ahram Gateway (Arabic) 11/20/2012]

Shura Member: Attacks on Morsi are high treason
During a Shura session yesterday, Ahmed Hassan, a member of the Shura Council called for the criminalizing of attacks by the media on President Mohamed Morsi, adding that remaining quiet on the matter is unpardonable. [El Watan (Arabic), 11/20/2012]

Some constitution writers reject non-Islamists’ withdrawal claims
Current members of Egypt’s constitution-drafting body, the Constituent Assembly, have downplayed the recent withdrawals of other members, claiming the number who have withdrawn is not as high as has been reported by the media. At a press conference held on Monday, the current members stressed that the assembly will resume its work normally. Several assembly members had staged a withdrawal on Sunday after giving a two day warning. [Ahram Online, allAfrica, 11/19/2012]

Egypt reaches preliminary deal for US$4.8 billion IMF loan
Egypt has reached a preliminary agreement with a team from the International Monetary Fund for a US$4.8 billion loan, a minister said on Tuesday. "We have a preliminary agreement with the technical team of the IMF," Planning and International Cooperation Ashraf al-Arabi told a news conference with the head of the IMF delegation. [Egypt Independent, Ahram Online, Shorouk (Arabic) 11/20/2012]

IMF will not grant Egypt loan without tough reforms: UK official
A well-positioned UK official close to the negotiations between the IMF and Egypt over a $4.8 billion loan deal reveals to Ahram Online that "The IMF wants economic reforms before it gives the money." Although the UK government agrees with the IMF conditions, it also believes it will not be easy for the Egyptian government to accept the loan’s terms. The UK government expressed it is willing to help accelerate the talks if Egypt will respond to the international financial institution’s demands. [Ahram Online, 11/19/2012]

CCC to partner with Chinese company in building new trains
Consolidated Contractors Company head Mostafa al-Hassan has said that the company will begin manufacturing new trains for the Egyptian railway system, in partnership with a Chinese company. Hassan told the Anadolu news agency that his company will establish a factory with preliminary investments estimated at US$100 billion. He added that the partner company, China Real, has extensive prior experience in the train manufacturing sector, and that the trains will conform to international standards. [Egypt Independent, 11/20/2012]

Confrontation between police, army under control, says military
The violent clashes between police and army officers that broke out Monday evening in New Cairo’s Fifth Settlement have been brought under control, said military spokesperson Ahmed Mohamed Ali. Central Military Zone Commaner Major Tawhid Tawfiq Abdel Sami, as well as the commanders of the Military Police and the commando forces, have gone to the Fifth Settlement to resolve the situation with the help of the Interior Ministry, Ali said. The zone was already secured by the military police. [Egypt Independent, 11/20/2012]

Children tortured by Egyptian security forces
Hundreds of children were subjected to torture, unjust detention and governmental neglect over the past year, Human Rights Watch (HRW) announced in a Tuesday press release. The New York-based organization said Egyptian police and military officers arrested and detained over 300 people under 18 years of age during protest-related events over the past year and said it possesses “strong evidence” that many of security personnel beat these children and subjected them to torture, including electrocution. [DNE, HRW, 11/20/2012]

‘Mohamed Mahmoud’ clashes continue for second day
Fighting which began on Monday between protesters and Central Security Forces (CSF) in downtown Cairo has continued into a second day. Protesters had gathered on Monday to commemorate last year’s Mohamed Mahmoud Street clashes. Stones were being exchanged on Sheikh Rihan Street, parallel to Mohamed Mahmoud Street, at around midday on Tuesday. The Ministry of Interior announced that it has made 19 arrests during the protests. [Ahram Online, Egypt Independent, EGYNews (Arabic) 11/20/2012]

Copts make up less than 1 percent of incoming Military Academy class
Copts made up a very small percentage of the incoming class at the Military Academy, which also saw a small number of cadets from Sinai. Academy chief Major General Essmat Murad told Al-Masry Al-Youm on Thursday that 25 students from North Sinai were admitted, as well as 11 from South Sinai. For many years, Sinai Bedouin complained about exclusion from police and military academies. Murad disclosed for the first time the number of Copts who were admitted to the academy. [Egypt Independent, 11/20/2012]

UN Secretary-General calls for immediate Gaza ceasefire in Cairo
United Nations Secretary-General Ban Ki-moon held an urgent press conference Tuesday morning in Cairo to discuss recent developments in the Gaza Strip and the ongoing conflict in Syria. "I am here personally to appeal for the end of violence and to offer my help in the ongoing efforts to achieve the ceasefire and to sympathise with civilians caught in the conflict," Ban Ki-moon asserted. [Ahram Online, 11/19/2012]

Gaza truce pressure builds, Cairo in focus
Israel’s leaders weighed the benefits and risks of sending tanks and infantry into the densely populated coastal enclave two months before an Israeli election, and indicated they would prefer a diplomatic path backed by world powers, including U.S. President Barack Obama, the European Union and Russia. Mursi, whose Muslim Brotherhood was mentor to the founders of Hamas, took a call from Obama on Monday telling him the group must stop rocket fire into Israel – effectively endorsing Israel’s stated aim in launching the offensive last week. [Reuters/Ahram Online, 11/20/2012]

Morsy to visit Pakistan Friday for D8 summit
President Mohamed Morsy will deliver a speech on Friday at the country’s joint parliament session, during his visit for the Developing 8 Islamic countries summit, Pakistani state radio reported. The report said that Morsy will be the first Egyptian president to visit Pakistan. Pakistan’s Foreign Minister Hina Rabbani Khar said Monday that Morsy’s visit will continue after the summit, despite the deteriorating situation in Gaza. [Egypt Independent, 11/20/2012]