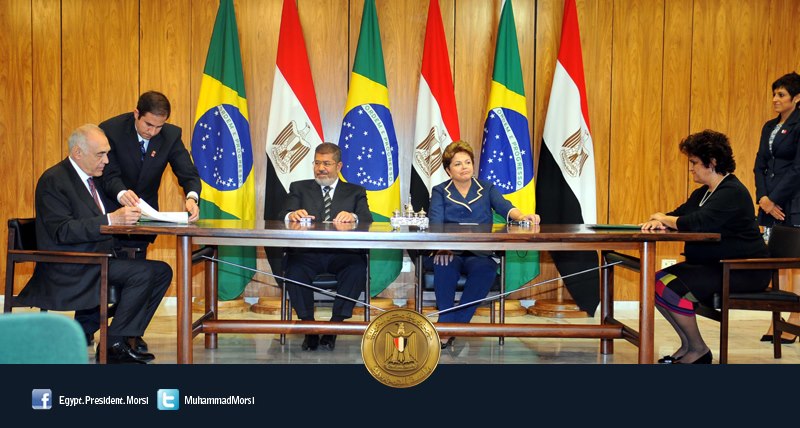 Egypt’s President Mohamed Morsi has approved a law allowing the state to issue Islamic bonds, the official gazette said Wednesday, ending a troubled passage for a bill the government hopes will help revive its flagging finances.

Egypt’s president signs Islamic bonds bill into law
Egypt’s President Mohamed Morsi has approved a law allowing the state to issue Islamic bonds, the official gazette said Wednesday, ending a troubled passage for a bill the government hopes will help revive its flagging finances. Egypt’s upper house of parliament, the Shura Council, which has assumed temporary legislative powers, approved the law last week after amending it to meet recommendations from al-Azhar, the country’s leading Islamic authority. Egypt’s official gazette said the law had been approved by Morsi and would go into effect Wednesday. Regulations for using the law would be issued within three months, it added. [Ahram Online, AP, 5/9/2013]

Ongoing criticism of Morsi’s new cabinet
Around half of Egyptians are not satisfied with a limited cabinet reshuffle. They prefer instead a complete overhaul of Prime Minister Hisham Qandil’s cabinet, according to the latest public opinion poll conducted by The Egyptian Center for Public Opinion Research (Baseera). 47 percent of respondents said that they prefer a new cabinet that is not led by Qandil, while 24 percent of respondents said they prefer a limited cabinet reshuffle. Former parliamentary affairs minister Mohamed Mahsoub described the reshuffle as a mere change of personnel that will not alter the government’s direction or policies. Nour Party head Younes Makhioun criticized the reshuffle, saying that it was further indication of the “Ikhwanization” of the state. Meanwhile, Nour Party secretary Shaaban Abdel Alim said that the key to resolving the current crisis lies in holding early parliamentary elections. First Assistant to the Justice Minister, Mahfouz Saber, resigned in objection to the appointment of Ahmed Suleiman as Minister of Justice. [DNE, Ahram Online, Shorouk (Arabic), Youm7 (Arabic), 5/9/2013]

Shura Council discusses budget
The Economic and Financial Affairs Committee of the Shura Council started on Wednesday discussion sessions for the new budget for the upcoming Fiscal Year (FY) 2013-2014. “The budget discussion will last for eight sessions,” confirmed Kamal Beshara, a member of the committee. Beshara also said that the committee has asked the Ministry of Finance to provide the required information about private funds “not included in the budget”. Dr. Fayyad Abdel Moneim, finance minister, said Thursday that the ministry has taken measures to control the state budget deficit through the rationalization of expenditures. The budget deficit reached LE175.9 billion at the end of March 2013 and accounted for 10.1% of GDP. [DNE, EGYNews (Arabic), Ahram (Arabic), 5/9/2013]

Trial of 13 activists postponed until 3 September
Giza Criminal Court has postponed the trial of prominent activists Alaa Abdel-Fattah and Mona Seif until 3 September. They are accused, along with 11 others, of burning the headquarters of Ahmed Shafiq during his presidential election campaign in May 2012. The prosecution says the activists stormed Shafiq’s campaign office, destroyed some of its contents and burned campaign posters. All 13 defendants are free until the trial resumes. [Ahram Online, Shorouk (Arabic), 5/9/2013]

Also of Interest:
Criminal court to hear first session arguments in the re-trial of Mubarak and his two sons on Saturday | EGYNews (Arabic)

Standard and Poor’s downgrades Egypt credit rating
Ratings agency Standard and Poor’s on Thursday downgraded Egypt’s long- and short-term credit rating over the government’s failure to meet the country’s fiscal needs. Egypt’s long-term rating was lowered to ‘CCC+’ from ‘B-’, while its short-term rating dropped to ‘C’ from ‘B’, the agency said in a statement. “The downgrade reflects our view that the Egyptian authorities have yet to put forward — either to the Egyptian population or the international donor community — a sustainable medium-term strategy to manage the country’s fiscal and external financing needs,” it said. [AFP/DNE, 5/9/2013]

Egypt urban inflation grows to 8.1% in April
Egypt’s urban Consumer Price Index (CPI) grew by 8.1 percent in the 12 months to April, recording 133.8 points, state statistics body (CAPMAS) announced on Thursday. The annual urban inflation rate in the 12 months to March 2013 was 7.6 percent. "This is in line with our expectations… You have a number of drivers, the weakening pound, energy shortages and the measures the government is taking to narrow its deficit," EFG-Hermes economist Mohamed Abu Basha said. Egypt’s pound has officially lost more than 15 percent of its value against the US dollar since the beginning of 2013, after the Central Bank of Egypt (CBE) ceased to unconditionally support the local currency. [Ahram Online, Reuters, 5/9/2013]

Mob demands another lynching in Egypt’s Sharqiya
Dozens of people in Sharqiya governorate have attempted to capture and publicly execute a man accused of raping and killing a seven-year-old girl, al-Ahram Arabic news website reported. Angry locals surrounded a police station in the Kafr Hassan Saleh district of Zagazig on Wednesday and attempted to take the man who was inside. The man allegedly raped the girl, killed her by hanging and left her body in a rubbish dump. The mob called for imposing the haraba penalty on the accused. [Ahram Online, 5/9/2013]

Renowned Egyptian newspaper editor to be tried for spreading ‘false news’
Magdy al-Galad, the editor of liberal daily newspaper Watan and Ahmed al-Khatib, a reporter, will face trial for publishing a "false report that could disturb public peace," a judicial official said on Wednesday. Al-Galad and al-Khatib were charged over a recent report that a militant Islamist cell arrested last year compiled a hit list comprising 100 Egyptian figures. Al-Galad, a harsh critic of the ruling Muslim Brotherhood and a former editor of the popular liberal daily al-Masry al-Youm, also hosts a TV Talk Show on the liberal Satellite channel CBC. [Ahram Online, 5/8/2013]

Salafi delegation meets Azhar’s Grand Imam
A Salafi delegation met Grand Imam of al-Azhar Ahmed al-Tayeb on Wednesday, where they agreed on the threat of Shi’ism to Egypt, according to Younis Makhioun, head of the Salafi al-Nour Party. The delegation consisted of leading figures from al-Nour and Salafi Da’wa, including Makhioun and prominent Salafi figure Yasser Borhami. Makhioun claimed that both sides agreed on combating the spread of Shi’ism in Egypt, which he described as “extraneous to Islam’s concepts”. He added that al-Azhar is the “defensive shield” against any attempts to approach Islam, explaining that it has a long history and great reputation in Egypt and abroad. [DNE, 5/8/2013]

US calls on Morsi lead process producing compromise and consensus
In a press briefing on Wednesday, speaking about the recent limited cabinet reshuffle, Patrick Ventrell, US State Department Spokesperson said that “The Egyptian people will be the ones to decide if this cabinet meets their needs and aspirations.” He did not comment on the cabinet’s composition, but said that the US urges “President Morsi to lead a process that produces compromises, that addresses real concerns and creates greater consensus across the political spectrum.” He added, “We know that Egypt faces enormous political and economic challenges, and building greater political consensus is essential to addressing these challenges for the sake of the Egyptian people.” [Shorouk (Arabic), State Department Press Briefing, 5/8/2013]

Morsi seeks closer trade ties with Brazil
President Mohamed Morsi pressed for closer bilateral trade and investment ties with Brazil on the first official visit by an Egyptian leader to Latin America’s dominant economic power. “Brazil can provide a lot of support for Egypt’s development and social justice,” said the Egyptian leader, on a two-day visit to this key member of the BRICS group of emerging powers. Morsi has already visited the four other members of the BRICS bloc — Russia, India, China and South Africa — which he hopes Egypt can join. Morsi’s Brazilian counterpart Dilma Rousseff meanwhile hailed her guest’s “historic” visit and the two leaders witnessed the signing of several technical cooperation accords, notably in the economic, cultural, scientific, environmental and agricultural sectors. Brazilian companies are particularly keen to invest in Egypt’s energy and transport infrastructure projects. Morsi and Rousseff also called for an end to the fighting in Syria and the creation of a Palestinian state as a way to achieve peace in the Middle East. [DNE, AP, SIS, Ahram (Arabic), Shorouk (Arabic), 5/9/2013]