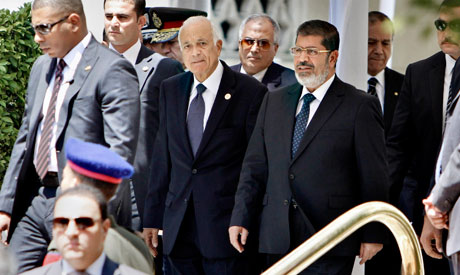 President Mohamed Morsy appointed 10 new governors, of whom four are affiliated with the Brotherhood, three are retired military generals and five are academics.

[Egypt Independent, Ahram Online, Daily News Egypt, Reuters, 9/4/2012] President Mohamed Morsy appointed 10 new governors, of whom four are affiliated with the Brotherhood, three are retired military generals and five are academics. The appointments counter recent media reports about a Brotherhood quest to hegemonize local governance by reserving a large percentage of governors’ posts for its members. Presidential spokesperson Yasser Ali says the decisions were based on merit, not party affiliations. While new appointments are not dominated by Brotherhood members, among them are figures who sympathize with the group.

[Egypt Independent, 9/4/2012] The Popular Current, whose launch was led by the campaign of former presidential hopeful Hamdeen Sabbahi, is the latest addition to the Egyptian political scene. Sabbahi, who has repeatedly slammed what he calls the "Brotherhoodization" of the state, called for establishing an inclusive coalition to face the Brotherhood in the upcoming parliamentary and municipal elections. Negotiations are still ongoing among all involved political parties for a possible merger between the Popular and Third Currents to avoid any fragmentation in the face of highly organized Islamist groups.

[Egypt Independent, 9/5/2012] The Constituent Assembly’s Formulation Committee has in principle approved a new constitutional article that would criminalize blasphemy, including comments insulting God, the prophets or Prophet Mohamed’s companions, sources from the assembly said Wednesday. The agreement was reportedly reached at a closed meeting Tuesday held at the Shura Council. The article, which would be incorporated into the second chapter of a new constitution, states that it is prohibited to insult the "Divine Entity, prophets of God, Prophet Mohamed’s wives, the righteous caliphs and the prophet’s companions." A number of political powers want the article dropped, but the Nour Party and FJP, which heavily influence the assembly, are pushing for the article.

[Egypt Independent, 9/5/2012] The hearing to review the 22 lawsuits filed against the composition of the second Constituent Assembly will be postponed to Saturday, said Muslim Brotherhood lawyer Abdel Moneim Abdel Maqsoud. Abdel Maqsoud told Al-Masry Al-Youm that the administrative court that is hearing the case is not fit to rule on this second formation of the Constituent Assembly, because it is the same court that had ruled to dissolve the first iteration of the assembly. The lawsuits will be presented to other courts in the next judicial season starting in October, the lawyer continued, adding that he was confident the courts would find in favor of the assembly.

System of Government Committee: Military Justice in Chapter on the Judiciary

[Al-Shorouk (Arabic), 9/5/2012] The Constituent Assembly’s System of Government Committee concluded its discussion on the division of judiciary authority, at which members agreed unanimously on the separation of the judiciary from prosecution in the new constitution. Members view it as a step towards judicial independence. They also included provisions granting immunity to judges and prosecutors, regulating their appointment and promotion, and prohibiting non-judicial work. Dr. Mohammed Mohieddin, rapporteur for the Committee, said that the different types of Courts were defined as ordinary courts, military courts, and the State Council. Mohieddin said that a simple majority voted for military justice to be included under the chapter on the judiciary to ensure the right to appeal to the Court of Cassation and prevent military trials of civilians except in accordance with the law.

US business leaders to visit Egypt amid debt cancelation questions

[Egypt Independent, AP, 9/5/2012] The Obama administration is sending to Cairo the largest ever U.S. trade delegation to the Arab world in a bid to help revitalize Egypt’s economy and strengthen ties between the once ironclad allies, officials said Tuesday.US Deputy Secretary of State Thomas Nides will accompany a major American business delegation visiting Egypt on Saturday, officials said, as speculation over a major debt cancelation agreement grows. Nides will join the US Chamber of Commerce and more than 100 executives from American companies aiming to promote private sector development in Egypt, the State Department said in a statement Tuesday.

In debate over devaluating the pound, officials avoid sparking panic

[Egypt Independent, Al-Ahram, 9/5/2012] In the past year, Egypt has been dealt a series of crippling economic blows, but the Egyptian pound has not depreciated greatly, thanks to the Central Bank of Egypt and some of its costly measures. Most economists and analysts see it as inevitable. The question remains, though, as to how the bank and the country’s leaders will tackle the currency’s adjustment and lessen its effects on a society already struggling with unemployment and rising food prices. The pound fell to 6.10 to the US dollar Monday, its lowest since 30 December 2004.

[Ahram Online, Egypt Independent, Reuters, al-Shorouk (Arabic), EGYNews (Arabic), 9/5/2012] Clashes erupted between Egyptian police and dozens of protesters in front of the Syrian embassy in Downtown Cairo during an anti-Assad protest Tuesday evening. Clashes started when protesters attempted to break through the cordon in front of the embassy, with the aim of taking down the Syrian flag, according to an Ahram Online correspondent at the scene. Police chased protesters away from the embassy building as Molotov cocktails and rocks were thrown. Egyptian police fired tear gas to scatter about 100 activists. Security forces arrested about five of the demonstrators. Approximately 85 people were injured.

[Ahram Online, Egypt Independent, 9/5/2012]The military is deploying light armored vehicles in Sinai to replace some heavy tanks whose presence at the border area had raised concerns in Israel, Egyptian security sources said on Tuesday. Egyptian military sources insist that ‘Operation Eagle,’ launched in the Sinai Peninsula following the 5 August attack near Egypt’s Rafah border crossing with the Gaza Strip, has not been shelved. Rather, they say, the next few days will witness fresh tactical deployments following the collection of fresh intelligence. The operation came under criticism after being temporarily halted after last month’s Eid holidays, with many units pulling back to locations in Beir Al-Abd, Baluza and Kharba. According to military sources, the expected tactical shift will include the abandonment of heavier units.

Information minister vows to take Faraeen channel off the air

[Egypt Independent, 9/5/2012] Media Minister Salah Abdel Maqsoud on Tuesday vowed to shut down the privately owned Fareen Channel headed by controversial media figure Tawfiq Okasha, alleging that its financing is influencing coverage. Abdel Maqsoud, who is affiliated with the Muslim Brotherhood, told Saudi satellite channel Al Arabiya on Tuesday that "political money is used in Okasha’s Faraeen channel and other [channels]." He mentioned reports that the channel owes broadcasting fees to Egyptian satellite service operator NileSat and that some officials have attempted to intervene to keep the channel on-air.

[Reuters, al-Shorouk (Arabic), 9/5/2012] Egypt’s president on Wednesday promised to put Cairo back at the heart of Arab affairs and made an impassioned appeal to Arab states to work to end the bloodshed in Syria, saying the time had come to change the Syrian government. Making his first presidential address to the Arab League in Cairo, Mohamed Mursi also said a quartet of states – Saudi Arabia, Iran, Turkey and Egypt – would meet to discuss the Syrian crisis. "The quartet which Egypt has called for will meet now," Mursi told Arab foreign ministers, though he did not give further details. For the complete text of Morsi’s speech in Arabic, click here.

[Egypt Independent, 9/5/2012] Egypt has filed a lawsuit against the British Treasury to compel the institution to cooperate in returning funds siphoned out of the country by former President Hosni Mubarak and a number of his regime officials, said on Tuesday Assem al-Gohary, the chairman of the Illicit Gains Committee. “There are GBP80 million [in Britain] and the British government should inform us on its status, irrespective of bank secrecy laws. Egypt and Britain signed the United Nations Convention Against Corruption,” Gohary said.