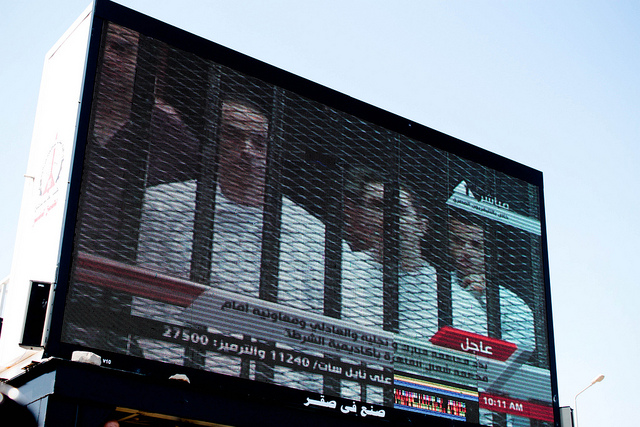 A Cairo court adjourned to July 6 the retrial of former President Hosni Mubarak over charges of corruption and involvement in the killing of protesters during the 2011 uprising that ousted him. The court on Monday also ruled to release his two sons, Alaa and Gamal, who are on trial for corruption, but they will remain in detention over other corruption-linked cases.

NSF to join June 30 protest, Brotherhood calls for calm
Egypt’s National Salvation Front (NSF) opposition coalition announced Saturday their full support for the anti-Morsi Rebel campaign, saying there is no longer room for negotiation with President Mohamed Morsi. Meanwhile, The Muslim Brotherhood has urged its members to avoid clashes with opposition groups ahead of mass protests planned for 30 June. Brotherhood spokesperson Gehad al-Haddad said on Monday the group would not take to the streets to confront anti-government rallies calling for early presidential elections. Members would only respond to protests if demonstrators rallied outside Brotherhood or Freedom and Justice Party offices, he claimed. Some Islamist groups supporting Morsi had earlier announced plans to launch solidarity protests with the president on June 30. However, the Salafi-oriented Nour Party will not participate in the pro-Islamist demonstrations. Hazem Salah Abu Ismail, a former presidential hopeful and founder of the Salafi-dominated al-Raya Party, called on Islamists Saturday not to stage any rallies on June 30 in support of Morsi. The Interior Ministry is bracing for possible violence on the day.  Security sources, speaking to al-Masry al-Youm on condition of anonymity, said that Republican Guards will block 14 streets close to the Ittihadiya presidential palace with barbed wire and concrete blocks one week ahead of planned rallies. [Ahram Online, DNE, Egypt Independent, 6/9/2013]

Egypt’s Socialist Popular Alliance to ‘reconsider’ NSF membership
The Socialist Popular Alliance Party published a statement on its Facebook page Sunday announcing that it would "reconsider" its membership in the opposition National Salvation Front (NSF) umbrella group at its upcoming central committee meeting. The statement criticized the lack of a viable decision-making mechanism inside the NSF because of an “absence of communication with revolutionary and social groups.” The party added that it has become common that some NSF members take unilateral action without consulting fellow members. The latest instance of dispute within the coalition surfaced after Amr Moussa, a leading NSF member and former presidential candidate, convened with Deputy Muslim Brotherhood leader Khairat al-Shater without his colleagues’ knowledge, for which Moussa apologized. [Ahram Online, Egypt Independent, 6/9/2013]

Morsi, Qandil join Islamist talks on dam project
President Mohamed Morsi will give a speech Monday evening on the ongoing row with Ethiopia, which lately started diverting the course of the Blue Nile for its Renaissance Dam project, sources told Ahram Online. Morsi will deliver his at a national conference organised by Islamist parties to discuss recommendations for a response to Ethiopia’s decision to divert the Blue Nile, which many fear could diminish Egypt’s share of potable water. Thirteen Islamist political groups are set to attend the talks according to a statement by the Muslim Brotherhood-affiliated Freedom and Justice Party. [Egypt Independent, Ahram Online, 6/9/2013]

Mubarak’s retrial on murder charges adjourned to July 6; court orders sons’ release
A Cairo court adjourned to July 6 the retrial of former President Hosni Mubarak over charges of corruption and involvement in the killing of protesters during the 2011 uprising that ousted him. The court on Monday also ruled to release his two sons, Alaa and Gamal, who are on trial for corruption, but they will remain in detention over other corruption-linked cases. During the session, aired live on state television, presiding judge Mahmoud Kamel al-Rashidi stressed the case would be run in a fair manner. Rashidi said that to ensure the proper execution of justice, he would be introducing further restrictions on who could attend Mubarak’s retrial proceedings, rejecting a request by lawyers representing victims’ families to participate in the hearings. Days before the adjournment, Freedom and Justice Party lawyer Abdel-Moneim Abdel-Maqsoud denounced the Cairo Criminal Court rejection of any of the plaintiffs’ petitions in the retrial of ousted president Hosni Mubarak and his aides, saying that it signaled that Mubarak, his sons and aides could be “on their way to escaping punishment.” [Ahram Online, AP, Egypt Independent, Aswat Masriya, 6/10/2013]

Justice Minister cancels conference; preparing new bill
A conference intended to resolve tensions between the Shura Council and judiciary will not take place, said Minister of Justice Ahmed Suleiman on Saturday. Suleiman told state-owned Al-Ahram that during his Friday meeting with President Mohamed Morsi, the Justice Conference was not brought up due to “unsuitable conditions”. Suleiman said the current crisis between the Shura Council and the judiciary, which objects to some amendments to the Judiciary Law proposed by Al-Wasat Party, would be resolved by the Ministry of Justice. He said his ministry was working on a draft that would modify some amendments and would seek consensus with Egypt’s judges before submitting the new draft to the Shura Council, affirming that the judicial reforms could be achieved while maintaining its complete independence. Suleiman underlined that the new bill, unlike previous ones, leaves intact the present retirement age. [DNE, SIS, Ahram Online, 6/8/2013]

Morsi adviser blames IMF for delaying Egypt $4.8 billion loan agreement
A leading adviser to Egypt’s president said Cairo had met all the requirements for a $4.8bn loan agreement with the International Monetary Fund and suggested the multilateral body was holding up the deal, under the pretext of needing to see a political consensus on the cabinet’s economic reform program. Essam al-Haddad, the closest aide to Mohamed Morsi, said that required measures, including a phased-out subsidies plan and a sales tax law, were now part of a program sent to the fund. Meanwhile, the IMF expects Egypt’s economy to grow at a slower rate during the next fiscal year compared to 2012-2013, while inflation is predicted to increase, according to a report on the economic outlook of the Middle East and North Africa region. [Amwal al-Ghad, Aswat Masriya, DNE, 6/9/2013]

Police blame Sinai jihadis for officer’s murder
Egyptian security officials say suspected militants have shot dead a counterterrorism police officer in the Sinai Peninsula. Officials said Maj. Mohammed Abdelaziz, 30, was killed Sunday in the town of el-Arish on the Mediterranean. The officials spoke on condition of anonymity because they were not authorized to brief the media. Preliminary police reports suggest that jihadi groups were responsible for the attack near Arish, after Islamist militants reportedly unearthed the names of security officials searching for the abducted soldiers last month. [Ahram Online, Aswat Masriya, AP, Egypt Independent, 6/10/2013]

Mob killings in Damietta and Mounifeya on Sunday
A man was tortured to death and dragged through the streets Sunday by vigilantes in the Mounifeya governorate village of Quesna. The unemployed man allegedly lured a 16-year-old girl to a stockyard, stole her jewelry, raped her and stabbed her to death. A similar incident occurred in the governorate of Damietta on the same day.  Security official says villagers abducted a man in northern Egypt and beat him to death on Sunday, the latest vigilante attack in the country. The villagers killed a carpenter they accused of killing a minibus driver, according to the official. [Ahram Online, AP, DNE, AFP/Egypt Independent, 6/9/2013]

Secularists and Islamists fear violence on June 30
Former MP Mustafa al-Naggar has warned that the anticipated violence on 30 June could mark the beginning of a "full-scale civil war" in Egypt, calling on Islamists not to stage counter protests against anti-Morsi demonstrators. Well-known Islamist lawyer Montasser al-Zayat said Saturday that he does not rule out the possibility of violence during the upcoming anti-Morsi protests scheduled for 30 June, amid rumors that President Mohamed Morsi’s Islamist supporters might stage a counter-demonstration on the same day. Meanwhile, al-Jama’a al-Islamiya, an Islamist movement based in Egypt, said that civil groups are trying to destroy the nation and are wrong to think that demonstrations scheduled for the end of this month will bring about "another revolution".  Meanwhile, local anti-harassment initiatives announced on Sunday that they would participate in the June 30 protests, which are aimed at toppling Egypt’s Islamist President Mohamed Morsi, to monitor incidents of sexual harassment or physical assaults. [Ahram Online, Aswat Masriya, 6/9/2013]

Poll: 59 percent of Egyptians have heard of Tamarod; Campaign gathers 13 million signatures
Organizers of a campaign aiming to “withdraw confidence” from Egyptian President Mohammad Morsi announced in a press conference on Sunday that they had gathered 13 million signatures since petitions were first collected on May 1. Bouthaina Kamel, founding member of the Constitution Party, also announced the opening of the new Tamarod campaign headquarters on Ramses Street in downtown Cairo. Two more Tamarod members were attacked on Saturday during separate incidents while gathering signatures. Among the injured was 19-year-old Mohamed Ibrahim who was stabbed while gathering signatures on Saturday, and is hospitalized in critical condition. Meanwhile, the Egyptian Center for Public Opinion Research “Baseera” conducted a public opinion poll at the end of May, on Egyptians’ opinion about the Tamarod campaign. Results indicate that 59 percent of Egyptians have heard of the campaign. Results show that 74 percent of urban residents have heard of the campaign, compared to 46 percent of rural residents. The percentage of Egyptians who are aware of the campaign decreases from 80 percent in urban governorates, to 59 percent in Lower Egypt and 46 percent in Upper Egypt. Respondents who have heard of the campaign were asked if they agree to sign the campaign form, with 50 percent replying that they do; this figure includes those who have indeed already signed it, as well as those who have not but are amenable to doing so in the future.[Arabiya, Egypt Independent, DNE, 6/10/2013]

UK reluctant to mediate Ethiopia dam controversy
The UK government has called on the Nile riparian states to negotiate a water-distribution agreement. Essam al-Haddad, Egypt’s assistant presidential advisor for external relations and international cooperation, raised the Egypt-Ethiopia Nile water dispute at discussions with British officials in London recently. The FCO spokesperson refused to confirm whether the UK was ready to mediate between Egypt and Ethiopia on the building of the controversial Ethiopian Renaissance Dam on the Blue Nile. Meanwhile, Egypt’s foreign minister, vowing not to give up "a single drop of water from the Nile", said on Sunday he would go to Addis Ababa to discuss a giant dam that Ethiopia has begun building in defiance of Cairo’s objections. Speaking to Egypt’s state news agency MENA two days after the Ethiopian government flatly rejected a request from Cairo to halt the project, Mohamed Kamel Amr underlined that Egyptians view any obstacle to the river as a threat to national survival. Angry Egyptian lawmakers accused the country’s prime minister and government on Monday of doing nothing to prevent Ethiopia from completing a dam that threatens to leave Nile-dependent Egypt with a dangerous water shortage. Prime Minister Hesham Qandil had just finished addressing parliament about how the government planned to work diplomatically, legally and technically to negotiate with Ethiopia over the dam when the session heated up. [Ahram Online, Reuters, Egypt Independent, AP, 6/10/2013]

Merkel questions aid to Egypt; US State Department ‘clarifies’ military aid
German Chancellor Angela Merkel criticized the ruling handed down by a Cairo court last Tuesday against 43 non-governmental organizations (NGO) employees  convicted of receiving illegal foreign funding. When asked on Friday whether Germany should toughen its restrictions on aid to Egypt, Merkel said they issued strong words concerning the closure of the Konrad Adenauer Foundation and the court ruling and that they “will keep an eye on the political situation in Egypt, to determine whether or not they need to modify restrictions on aid.” Meanwhile, the US State Department defended its decision to renew $1.3bn in military aid to Egypt saying that it serves to protect US and regional security despite the increasing concern over Egypt’s democratic transition. [DNE, SIS, 6/8/2013]