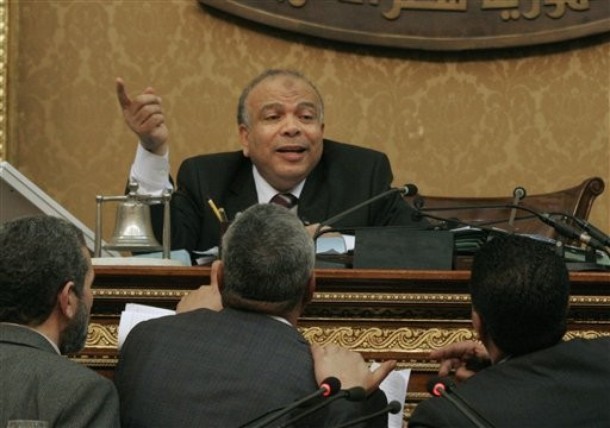 The Muslim Brotherhood issued a statement on February 9 demanding that the SCAF allow the replacement of the current prime minister and cabinet with a new coalition government formed by Parliament, which would amount to an immediate transfer of power.

2) Rejecting calls by revolutionary groups for a nationwide civil disobedience campaign on February 11, the North Cairo office of the Muslim Brotherhood’s Freedom and Justice Party (FJP) – along with FJP MPs Hazem Farouk and Reda Fahmy – called for a "cleanup day" on Saturday to beautify the capital city.  [al-Ahram, English, 2/10/2012]

3) The Muslim Brotherhood issued a statement on February 9 demanding that the SCAF allow the replacement of the current prime minister and cabinet with a new coalition government formed by Parliament, which would amount to an immediate transfer of power. The Brotherhood had previously said it was content to wait for the June deadline for a power transfer to civilians set by the SCAF. The Coptic Church has reportedly asked that Christians be given four cabinet portfolios in the Brotherhood-appointed government. [NYT, English, 2/10/2012] [al-Masry al-Youm, Arabic, 2/10/2012]

6) The United States issued a correction on February 9, saying it has not yet obtained a document outlining the formal charges against US citizens working for NGOs in Egypt. State Department Spokesperson Victoria Nuland said lawyers representing the United States in Egypt told her the magistrate investigating the activities of pro-democracy groups in Egypt has forwarded a charging document to the public prosecution. But neither the US Embassy in Cairo nor the lawyers representing the accused US citizens have seen the document yet. [AFP, English, 2/10/2012]

7) Finance Minister Momtaz al-Saeed estimated that Egypt will need about US$11 billion to finance an economic reform program over the next few years, following a meeting with an EU mission in Cairo. Egypt’s cabinet approved the reform plan on Wednesday, and it will be open to public debate before being submitted for approval to the International Monetary Fund as part of negotiations for a loan package. [al-Masry al-Youm, English, 2/10/2012]

8) Following reports that the Egypt has requested a $1 billion loan from the World Bank, Robert Zoellick said he expects “tensions” over the negotiations if Egypt does not meet the lender’s expectations for progress in transparency and democratic development.  Zoellick described “part of the former regime” and also expressed concerns about the Brotherhood’s leadership of the new parliament.  “If we do provide initial financial support to the government in general, we will want … to make sure it’s transparent, that it relates to some of the changes that people were calling for or a broader social accountability. And there’ll be tensions with that,” Zoellick said. [AFP, English, 2/10/2012] [Reuters, English, 2/2/2012]