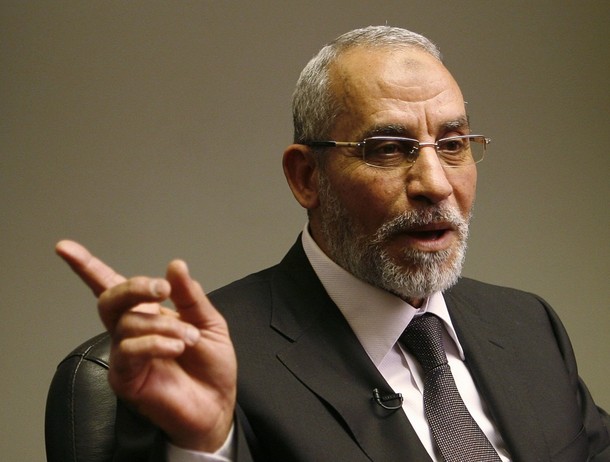 The Muslim Brotherhood’s Supreme Guide, Mohamed Badie, confirmed that the Freedom and Justice Party intends to form a new government before the end of the transitional period. He also reiterated the Brotherhood’s previous pledge not to nominate its own presidential candidate.

2) Former Prime Minister Ahmed Shafiq official launched his presidential campaign, saying that his decision to run for office came after consultations with Field Marshal Tantawi, whom he described as “a brother and a dear friend.” [al-Masry al-Youm, Arabic, 2/14/2012]

3) The Muslim Brotherhood’s Supreme Guide, Mohamed Badie, confirmed that the Freedom and Justice Party intends to form a new government before the end of the transitional period. He also reiterated the Brotherhood’s previous pledge not to nominate its own presidential candidate. [al-Ahram, English, 2/14/2012]

4) Essam El-Erian, vice chairman of the Freedom and Justice Party and chairman of the Egyptian parliament’s foreign affairs committee, said that the Brotherhood would consider changing the terms of Egypt’s 1979 peace treaty with Israel if military aid to Egypt is cut. “What was acceptable before the revolution is no longer,” he said, adding that should the aid provisions outlined in the treaty be modified, it could open the door to further changes in the agreement. [Jerusalem Post, English, 2/14/2012] [al-Youm al-Saba’a, Arabic, 2/14/2012]

5) The parliamentary Legislation Committee dismissed a proposal introduced by MP Ahmed Saeed, head of the Free Egyptians Party, to launch presidential elections before the drafting of a new constitution. According to Saeed, the FJP-led committee’s decision “clear disregard for the demands of a large segment of the political forces, which demanded writing a new constitution for the country after the inauguration of a civilian elected president.” [Aswat Masriya, English, 2/12/2012] [Bikya Masr, English, 2/14/2012]

6) In his annual budget message to Congress on February 13, President Obama asked that military aid to Egypt be kept at its current level of $1.3 billion amid congressional calls for a suspension of aid. [Reuters, English, 2/13/2012]

7) President Obama proposed an $800 million foreign assistance package to support the "Arab Spring." Most of the economic aid for the Arab Spring countries — $770 million — would go to establish a new "Middle East and North Africa Incentive Fund," the president said in his budget plan. [Reuters, English, 2/13/2012]

8) Members of Congress reported that no U.S. assistance is moving to Egypt at the moment.In fiscal 2012, $250 million of aid approved for Egypt was economic; $1.3 billion was military and there was a $60 million "enterprise fund" approved by Congress. [Reuters, English, 2/13/2012]

9) U.S. State Department Spokeswoman Victoria Nuland warned that “if we can’t resolve this situation, it could have implications for the whole relationship with Egypt, including what we would like to do together and how we would like to support them.” Beyond the threatened suspension of military aid for FY2012, Nuland suggested that the NGO crisis could have implications for the allocation of military aid to Egypt next year (2013). [State Department, 2/13/2012]

10) Egyptian state-run newspapers escalated tensions between the U.S. and Egypt over the NGO crisis with headlines accusing America of plotting to spread "anarchy" in Egypt, based on comments made by Minister of International Cooperation Fayza Aboul Naga accusing the U.S. of trying to steer the course of the transition in "a direction that realized American and Israeli interests.” [Reuters, English, 2/14/2012]

11) The Egyptian government, seeking to head off a funding crisis, is preparing to raise about $2 billion through its first issue of Islamic bonds, according to an Islamic scholar familiar with the government’s planning. [Reuters, English, 2/14/2012]