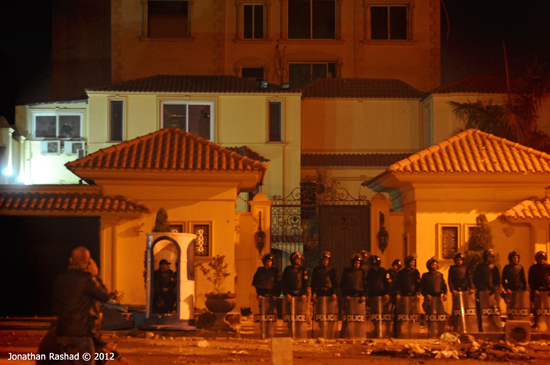 Egypt’s largest Islamist group, the Muslim Brotherhood, has been officially registered as a non-governmental organization by the ministry of social security. The announcement of the group’s status came shortly after the State Commissioners Board recommended the Supreme Administrative Court (SAC) reject the Brotherhood’s longstanding appeal against a 1954 decision by the then-ruling Revolutionary Command Council declaring the group illegal and ordering its dissolution

Sources say Morsi planning truce with revolutionary youth
Sources close to President Mohamed Morsi said Wednesday that he is seeking a political truce with revolutionary forces. According to the sources, who spoke on condition of anonymity, he has tasked advisor Emad Abdel Ghafour to seek out these groups and ask them to end weekly protests and demonstrations. In return, Morsi would accede to some of their demands, which include a national coalition government and a committee to oversee the integrity of upcoming parliamentary polls. The National Salvation Front, Egypt’s main opposition alliance, said in a statement on Wednesday that it aims to meet with leaders of rival groups next week. [Egypt Independent, Aswat Masriya, 3/20/2013]

NSF calls for new voter lists ahead of elections
The National Salvation Front said Wednesday that parliamentary elections cannot go ahead unless the government issues new voter electoral lists and offers concrete guarantees the polls will be free and fair. The main opposition coalition made the announcement ahead of its first roundtable with Islamic parties, including the Nour Party, Strong Egypt Party, Egypt Party and Reform and Development Party on Saturday. In a statement after a meeting at the Free Egyptian Party headquarters, NSF members expressed their concern about possible manipulation of voters’ lists, a complaint that is being reviewed by the State Commissioners Authority. [Egypt Independent, 3/20/2013]

Egypt’s justice minister Mekki will not resign: Ministry
Ibrahim Abdel-Khalek, head of Egypt’s Minister of Justice office, said the Minister Ahmed Mekki continued work on Wednesday despite his request to step down, according to al-Ahram’s Arabic news website. Abdel-Khalek explained that the cabinet asked Mekki to maintain his position, after he requested to be relieved of his duties to protest attacks by the public against the judicial system. [Ahram Online, 3/20/2013]

Muslim Brotherhood officially registered as NGO after Supreme Administrative Court body urges its dissolution
Egypt’s largest Islamist group, the Muslim Brotherhood, has been officially registered as a non-governmental organization by the ministry of social security. The ministry will oversee the group’s funding now it is officially registered as an NGO. The announcement of the group’s status came shortly after the State Commissioners Board recommended the Supreme Administrative Court (SAC) reject the Brotherhood’s longstanding appeal against a 1954 decision by the then-ruling Revolutionary Command Council declaring the group illegal and ordering its dissolution. Some analysts argue that the abrupt registration is in breach of the law 84/2002 that forbids NGOs from taking part in political activities, raising doubts about the transparency of the process. Before the registration was announced, a brotherhood lawyer had requested a reconsideration of the group’s appeal before a verdict. [Ahram Online, Egypt Independent, SIS, El Watan (Arabic), AMAY (Arabic), Ahram (Arabic), 3/21/2013]

Brotherhood lawyer files complaint over demonstration
Abdel Moneim Abdel Maqsoud, lawyer for the Muslim Brotherhood, filed a number of complaints with the Ministry of Interior against 14 political parties and public figures who called for the demonstration at the Guidance Bureau headquarters in Moqattam. He emphasized his full respect for freedom of opinion and expression, provided it does not threaten public safety and security, but urged that steps be taken against those who resorted to acts of violence in this demonstration. [Ahram (Arabic), 3/21/2013]

Diesel fuel shortage easing, says Cabinet
The Cabinet discussed fixing the country’s diesel shortage and combating smuggling during Wednesday’s session. The Cabinet said the number of districts and municipalities suffering diesel shortages had declined from 122 to 95 over the past week, accounting for a 22 percent decrease. The number of districts where the crisis remained stable increased from 111 to 142 over the same period. However, many are still suffering from extreme shortages, according to the Cabinet. The government has implemented numerous public campaigns to curb fuel smuggling in the last 10 days. New legal measures to combat smuggling are in the works as well, which has helped stabilize diesel supplies at some gasoline stations. [Egypt Independent, 3/20/2013]

Egypt cabinet unveils 2013/14 socio-economic development plan
Egypt’s Cabinet on Wednesday unveiled the main features of its social and economic development plan for the fiscal year 2013/14. According to the plan, which has been published on the cabinet’s official Facebook page, Egypt’s economic growth rate is forecast to reach 4.1 percent in 2013/14, up from the 3 percent expected for the current 2012/13 fiscal year. The growth rate for individual incomes, meanwhile, is expected to rise to 2.1 percent in the next fiscal year, according to the plan. In 2012/13, the figure is forecast to rise by 0.6 percent. [Ahram Online, 3/20/2013]

Community checkpoints to play role of Police prohibited
At its meeting on Wednesday under Prime Minister Hisham Qandil, the Cabinet reviewed the latest security developments and the progress of efforts exerted to maintain stability. The Cabinet stressed that no person, or trend or group would be allowed to interfere in the police work or play any of its roles it in the form of community checkpoints or any other form. They said these attempts would be strongly confronted by policemen in line with law. [SIS, Ahram (Arabic) 3/21/2013]

Imams protest ‘Brotherhoodization’ of Religious Endowments ministry
Dozens of mosque imams protested in front of the Ministry of Religious Endowments on Wednesday to reject the policies of minister Talaat Afify, accusing him of Brotherhoodiziing the ministry. The protesting imams called for granting immunity to imams and canceling steps aimed at Brotherhoodizing mosques and marginalizing imams. Mosque preachers have been voicing fears that radical religious currents, such as Salafism, may be undermining the role of state-appointed imams. They also fear the Muslim Brotherhood will use mosques for electoral publicity. [Egypt Independent, EGYNews (Arabic), 3/20/2013]

Brotherhood defends right to protect headquarters; Journalists Syndicate rejects Brotherhood apology
The Muslim Brotherhood said Thursday that it has the right to defend its headquarters in Moqattam against attacks by protesters opposed to its group. The Brotherhood’s Secretary General Mahmoud Hussein said, "We do not start fights but we will not allow anyone to attack our headquarters." He has also called on the head of Egypt’s press syndicate to investigate an assault by a photographer on guards outside the Brotherhood’s Cairo headquarters, asserting that the photographer had deliberately provoked the guards before photographing their violent reaction. He added that the group was prepared, if asked, to hand over to authorities members for questioning over a recent assault on activists and reporters. Khaled Meery, a member of the Journalists Syndicate board, said his group had rejected an apology from the Muslim Brotherhood for the assault of peers covering a Brotherhood protest at its headquarters in Moqattam on Saturday. The Brotherhood published a statement on its official Facebook page saying it "respects journalists." Meery said the Brotherhood refused to hold anyone responsible for the attack that injured several protesters and journalists. [Egypt Independent, Ahram Online, AP, AMAY (Arabic), 3/21/2013]

NCW head to sue Jama’a al-Islamiya for defamation
The National Council for Women’s chief said Thursday she planned to sue Jama’a al-Islamiya for defaming her character. Ambassador Mervat al-Talawy said she is taking the group’s political arm, the Construction and Development Party, to court for describing her as "an enemy to Islam" on its Facebook page. Talawy added that party members accused her of leading a campaign against al-Azhar scholars. In response, Jama’a al-Islamiya said the statement an administrator’s mistake. Talawy also said the Islamist organization is guilty of smear campaigns against public figures and others who oppose or disagree with the group. The Salafist Call has urged a review of the law on the formation of the NCW, demanding that it be brought under the auspices of the Shura Council. It also criticized al-Talawy’s participation in the Egyptian delegation to the UN’s Committee on the Status of Women. [Egypt Independent, EGYNews (Arabic), 3/21/2013]

EU: Egypt must improve reforms or face aid cuts
The European Union warned Egypt on Wednesday it could lose funds from its 5 billion euro aid package if democratic reforms fail to satisfy Brussels, adding that Cairo has already lost some additional funding. In a report on reforms in Eastern Europe, the Middle East and North Africa, the European Commission said Cairo has shown insufficient progress since the 2011 revolt that overthrew President Hosni Mubarak and handed power to the Islamist Muslim Brotherhood. It listed "serious setbacks" in areas such as human rights, and criticised Egypt’s President Mohamed Morsi for pushing through constitutional changes that have plunged the country into "a deeply divisive political crisis".[Reuters/Aswat Masriya, 3/20/2013]

Egypt seeks prisoner swap with Libya, say sources
Egypt is seeking to swap four members of Muammar Gaddafi’s regime arrested in Cairo with a group of Egyptians detained in Libya, two Egyptian judicial sources said on Wednesday. A source at the Libyan justice ministry said the idea had been raised in talks on judicial cooperation between Libyan officials and the assistant Egyptian prosecutor general, Hassan Yasine, who has been on an official visit to Tripoli this week. Egypt wants Libya to hand over a group of Egyptian Christians accused of proselytizing, Egyptian sources said. According to a Public Prosecution official, however, there is not enough evidence to hand over asylum seeker Ahmed Qahdafi al-Dam to Libyan authorities as of now. Libya’s Intelligence Chief, Salem Abdel Fattah Salem, arrived in Cairo the same day to discuss the matter. Deputy Assistant Foreign Minister for Arab Maghreb and Libya Affairs Youssef Ahmed al-Sharkawy said friendly negotiations over visa and trade issues were ongoing. [Reuters, Egypt Independent, SIS, Shorouk (Arabic), 3/21/2013]

Egypt to stop exporting gas to Jordan in June; Egyptian workers deported from Jordan
The confrontation between Egypt and Jordan has escalated since the publication of comments by Jordanian King Abdullah about Egypt’s President Mohamed Morsi. Jordanian officials have continued to deport Egyptian workers from the country, while an official from the Ministry of Petroleum revealed a recommendation from the presidency to gradually reduce gas exports to Jordan, before stopping exports entirely by next June. [El Watan (Arabic), 3/21/2013]