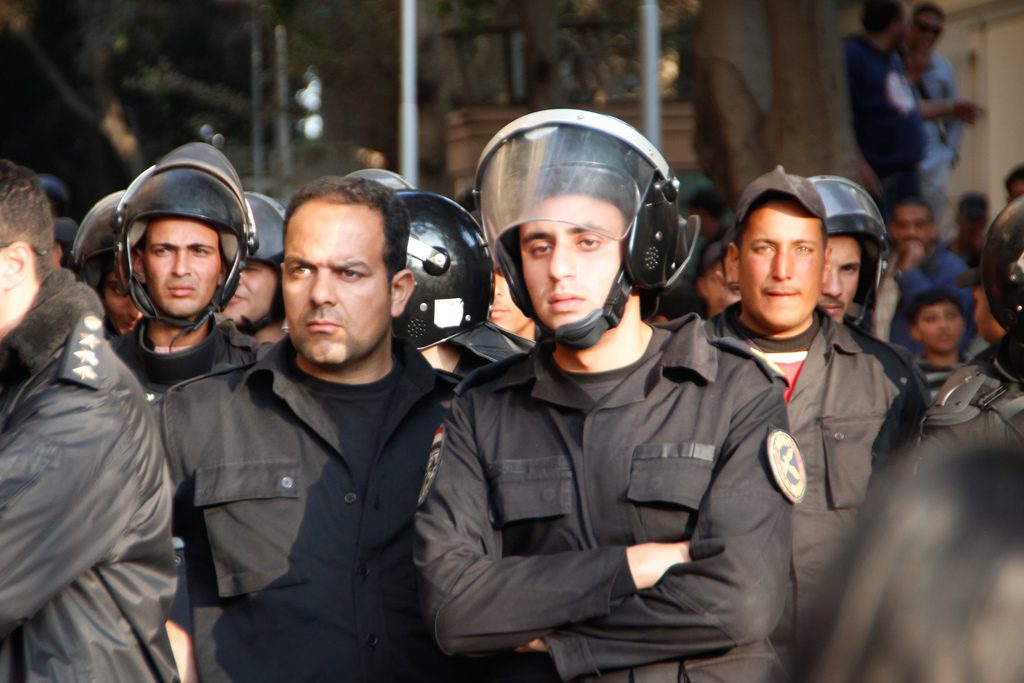 The Muslim Brotherhood warns that a UN declaration on women’s rights could destroy society by allowing a woman to travel, work and use contraception without her husband’s approval and letting her control family spending.

Morsi promises justice for Port Said
President Mohamed Morsi promised justice to the people of Port Said on Thursday after investigations concluded into the violence that killed dozens on 26 January. “When the results of the investigations emerge, all rights of the families of anyone martyred in Port Said shall be preserved,” he asserted. About 3000 members of the Masry Club Ultras took part in a protest, denouncing Morsi’s speech and calling for continued civil disobedience. [Egypt Independent, Ahram Online, Aswat Masriya, Al Masry Al Youm (Arabic), Video (Arabic), 3/14/2013]

Cabinet may reconsider ban on new satellite channels
The Cabinet is reconsidering the ban on issuing new permits for private satellite channels, state-run news agency MENA reported on Thursday. Former Information Minister Osama Heikal had announced the ban in September 2011, following a decision made by the interim government headed by the Supreme Council of the Armed Forces. Heikal claimed that private satellite networks were igniting chaos. [Egypt Independent, 3/14/2013]

NSF waffles on Nour Party partnership, says dialogue with presidency not an option
Egypt’s main opposition group said it rejected President Mohamed Morsi’s invitation for national dialogue and called for a round table meeting with four political parties on Thursday. The front invited the Salafi Nour Party, the ‘Strong Egypt’ Party, the Reform and Development Party, and a fourth party to discussions and said it rejected the invitation for national dialogue. According to Egypt Independent, however, the NSF is having second thoughts on partnering with the Nour Party on a national consensus initiative, claiming it needs certain promises to be made in advance. [Egypt Independent, Aswat Masriya, 3/14/2013]

Presidential powers questioned in elections appeal
A judicial body on Wednesday appealed the Cairo Administrative Court’s recent decision to suspend upcoming parliamentary elections, raising questions over the future of the contentious elections and the exercise of presidential powers. Now the government is arguing that scheduling elections falls under the auspices of the president’s office and, as such, cannot be subject to judicial suspension or appeal. [Egypt Independent, 3/14/2013]

Prosecutor orders monitoring of Black Bloc websites
Prosecutor General Talaat Abdallah has sanctioned widespread surveillance measures targeting the Black Bloc, a largely unknown group of masked protesters that first appeared at demonstrations marking the second anniversary of the 25 January revolution. As part of these measures, the Interior Ministry and the General Intelligence Service have started monitoring all websites run by the group, searching for content that may encourage violence and attempting to identify the page administrators, said prosecution spokesperson Mostafa Duweidar. [Egypt Independent, 3/14/2013]

Payments figures add to pressure for IMF deal
Egypt’s current account deficit narrowed in July-December, data showed on Thursday, but economists said it remained a major problem that is adding to pressure on the government to do a deal with the International Monetary Fund. The Egyptian central bank reported that the current account deficit fell to $3.0 billion in the second half of calendar 2012 from a shortfall of $4.1 billion in the same period a year earlier. An International Monetary Fund delegation is due to arrive in Cairo on Sunday to renew discussions regarding economic reforms, said IMF deputy spokesperson William Murray on Thursday. [Reuters, Egypt Independent, 3/14/2013]

Egypt’s balance of payments deficit narrows in 2012/2013
Egypt’s balance of payments deficit dropped to $551.5 million in the second half of 2012 from an $8 billion deficit in the same period the previous year, due to an increase in remittances and a surge in portfolio investments, the country’s central bank said in a statement on Thursday. The balance of payments (BOP) shows international transactions in goods, services and money. Data released by the central bank show that Egypt’s foreign investment portfolio saw an outflow of $260.2 million, compared to $3.3 billion last year, due mainly to a drop in the foreign sales of Egyptian treasury bills. [Ahram Online, 3/14/2013]

Morsi to CSF: You are the watchful eyes protecting the nation
President Mohamed Morsi warned Central Security Forces (CSF) officers and conscripts of rumours spread by foreign enemies and designed to cause disunity. Morsi, who delivered speech on Friday at the CSF command centre in Darassa, thanked the police and the military for their role in securing the country. Accompanied by Interior Minister Mohamed Ibrahim, the president held meetings with the soldiers and officers after prayers. The newly appointed head of the Central Security Forces, Ashraf Abdallah, said on Friday that the police did not use excessive force against protesters. [DNE, Ahram Online, AP, Aswat Masriya, EGYNews (Arabic), Ahram (Arabic), Al Masry Al Youm (Arabic), 3/15/2013]

Jama’a al-Islamiya drafting law to legalize civilian police groups
Jama’a al-Islamiya’s political arm is working on a draft law to legalize civilian policing groups in the wake of recent police withdrawals and strike action.  Khaled al-Sherif, the Construction and Development Party’s media consultant, said Thursday that the proposed legislation is set to be presented to the Shura Council. He assured critics that the groups would not carry weapons and would be supervised by the government. "The popular committees we call for will not be armed and will be affiliated with the Interior Ministry," he said. [Egypt Independent, 3/14/2013]

Anti-Brotherhood protesters flock to Nasr City, demand military rule
Dozens of protesters took Nasr City early on Friday afternoon, joining the “Last Chance” protest against President Mohamed Morsi and his administration. Traffic was blocked in lanes leading to Nasr City. Protesters set up a stage next to the Tomb of the Unknown Soldier, and raised photographs of public figures including Defense Minister Abdel Fattah al-Sisi and late President Mohamed Anwar al-Sadat. More than 30 political parties and groups had called for today’s protest, which demands military intervention against the “brotherhoodization” of the state and to stop what they allege are “Islamist militias” that intimidate the people.[Egypt Independent, 3/15/2013]

Muslim Brotherhood warns giving women some rights could destroy society
The Muslim Brotherhood warns that a UN declaration on women’s rights could destroy society by allowing a woman to travel, work and use contraception without her husband’s approval and letting her control family spending. The Islamist movement that backs President Mohamed Morsi gave 10 reasons why Muslim countries should "reject and condemn" the declaration, which the UN Commission on the Status of Women is racing to negotiate a consensus deal on by Friday. [Egypt Independent, 3/15/2013]

Also of Interest:
Ultras groups back in action | DNE

EU addresses Egypt situation
The European Union High Representative for Foreign Affairs and Security Policy Catherine Ashton delivered a speech to the European Parliament and spoke extensively on the current situation in Egypt. According to Thursday’s press release, Ashton said there are still several issues which Egypt must overcome for the country to get on the right track. Speaking on behalf of the EU, Ashton urged calm, restraint and dialogue. [DNE, Ahram Online, 3/15/2013]

Egypt demands rapid investigation into Benghazi church attack
The Foreign Ministry issued a formal condemnation of the attack on an Egyptian Coptic Church in Libya’s Benghazi on Thursday. The ministry said it was in communication with the Libyan authorities, and had advised the Egyptian ambassador to Tripoli and the consul-general in Benghazi to also follow up on the case on the ground. The ministry demanded immediate investigations into the incident and swift measures be taken to bring the perpetrators to justice. There is no discrimination against Egyptians in Libya Assistant Foreign Minister for Consular Affairs Ali al-Ashiri said in a separate statement. He said there are security problems in Libya , extremist groups, attacks on Egyptian and non-Egyptian churches and assaults on persons regardless of their political and religious affiliation. [Egypt Independent, SIS, 3/15/2013]

Hamas denies planning deadly attack on Rafah army camp
Hamas’ military wing denied involvement Thursday in the deadly attack on a Rafah checkpoint in August 2012, which killed 16 Egyptian soldiers. During a press conference in Gaza aired by al-Jazeera, a masked spokesperson for the Izz al-Din Qassam Brigades accused Egyptian media of spreading lies about Hamas after a local magazine accused the Gazan ruling party of masterminding the assault. It was not possible to verify contents of the report published by state-run al-Ahram al-Araby, which is closely connected to security agencies. Ashraf Badr, the paper’s editor-in-chief threatened to submit to the International Court of Justice documents and other information pertaining to the identity of the alleged perpetrators. In related news, Mahmoud al-Zahar, a Gaza-based senior Hamas leader, said on Thursday that “relations between Hamas and Egypt are better than ever before,” denying the existence of Hamas training camps in Sinai. Additionally, the seven Palestinians arrested at Cairo Airport were deported via the Rafah Crossing. [Egypt Independent, AP, Egypt Independent, Ahram Online, EGYNews (Arabic), Al Masry Al Youm (Arabic), 3/15/2013]