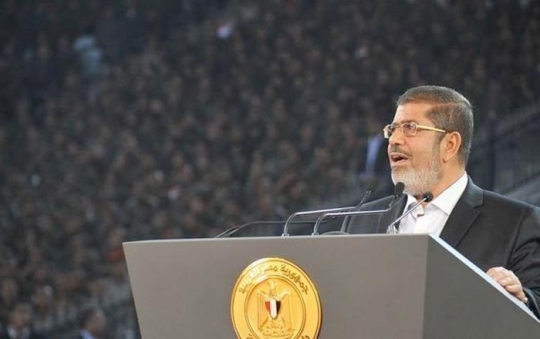 A public opinion poll released Wednesday gives President Mohamed Morsy a 78 percent approval rating during his first 100 days in office, much higher than some others conducted recently.

New poll puts president approval rating at 78 percent
A public opinion poll released Wednesday gives President Mohamed Morsy a 78 percent approval rating during his first 100 days in office, much higher than some others conducted recently. According to the poll conducted by independent think tank The Egyptian Center for Public Opinion Research (Baseera), 41 percent said the president had solved security, traffic, fuel, garbage and bread production problems. Nearly the same number (40 percent) said he has failed to resolve those issues, with the remaining respondents undecided. Of those surveyed, 58% said they would reelect Morsi. [Egypt Independent, Shorouk (Arabic), 10/10/2012]

New rift in Al-Nour party denied
The Salafi Al-Nour party has denied a new rift within the party, following incorrect media reports that party Chairman Emad Abdel Ghafour dismissed four prominent members. “This is not true, after the reconciliation meeting on Friday and Saturday everything is stable, nobody was dismissed,” a member of the party’s supreme committee, Ashraf Thabet, told Daily News Egypt. Ashraf Thabet, Younes Makhyoun, Galal el Morah and Nader Bakkar were reportedly dismissed from Al-Nour party following conflicts between them and the party chairman. [Daily News Egypt, 10/9/2012]

Egypt’s Illicit Gains Authority imposes travel ban on Ahly chairman Hamdy
Ahly chairman Hassan Hamdy was released on a LE2 million bail on Tuesday after being questioned by Egypt’s Illicit Gains Authority (IGA)  on charges of illegally accumulating wealth. According to state-run news agency MENA, Hamdy has failed to explain how he had accumulated around LE500 million during his time as the chairman of Al-Ahram’s advertising agency. He had his assets frozen by the IGA, MENA added. [Ahram Online, 10/9/2012]

Egypt drops blasphemy case against two Christian boys
Two Egyptian Christian boys detained over charges of blasphemy and insulting the Koran were released and their case was dropped on Wednesday, their defence lawyer said. The brothers, Mina Nadi, 9, and Nabil Nadi, 10, were accused by locals in the village of Marco south of Cairo of tearing up a copy of the Koran and urinating on it. [Reuters, Shorouk (Arabic), 10/10/2012]

IMF revises upward Egypt growth for 2012
Egypt’s economy will grow a better than expected 2 per cent in 2012 as political tensions ease, the International Monetary Fund (IMF) said on Tuesday. The IMF’s new estimate is markedly more optimistic than the 1.5 per cent annual growth it predicted in April and is slightly ahead of forecasts for the Middle East and North Africa’s other net oil importers. Egypt’s economy grew 1.8 per cent in 2011, according to other IMF figures. [Ahram Online, 10/9/2012]

Media ‘witch hunts’ hamper business in Egypt: Citadel chief
Media ‘witch hunts’ of business figures makes government officials reluctant to help potential investors, one of Egypt’s most prominent businessmen has said. Ahmed Heikal, chairman of leading private equity firm Citadel Capital, said Egyptian media is partly to blame for the weak levels of investment the country has seen over the past few months. "There is a challenge but it is not financial," Heikal told experts and journalists gathered at Tuesday’s Euromoney conference in Cairo. [Ahram Online, 10/9/2012]

Barclays Bank Egypt mulls Islamic services, FJP denies “Islamizing” banks
Barclays Bank Egypt is considering introducing some Islamic banking services in the local market in the near future, capitalizing on its experience in other Arab and European countries. In related news, FJP finance chief denied the “islamization” of the banking sector, noting that 83% of Egyptians do not even use banking services. [Egypt Independent, Ahram Gateway (Arabic), 10/9/2012]

Fitch: Egypt fuel subsidy reform is likely to to be gradual
Reform of Egypt’s expensive fuel subsidy is likely to be gradual despite the government’s recently repeated intention to address the problem, says Fitch Ratings. We believe significant cuts will be difficult to agree this year and may have to await next year’s budget, which starts in July. But the government may decide to make smaller reductions before the end of the year in order to start the process and signal its intent, especially in the context of IMF negotiations. [Fitch/Reuters, 10/9/2012]

Jihad movement accuses Morsy of ignoring reconciliation attempts in Sinai
The as yet unofficial Peace and Development Party affiliated with the Islamic jihad movement accused President Mohamed Morsy Tuesday of ignoring the initiatives that its leaders have proposed in Sinai. Peace and Development leader Mohamed Abu Samra told Al-Masry Al-Youm that the party plans to form a coalition to make peace between the Armed Forces and jihadis in Sinai. Abu Samra expressed wonder at what he called "the lack of vision on the part of the administration and its disregard for all initiatives presented by the jihad movement and the Salafi jihadis to stop violence in Sinai."  [Egypt Independent, Ahram (Arabic), 10/9/2012]

New document released to govern publishing practices
Concerned about copyrights and regulating publishing, the Egyptian Publishers Association has put together a document envisioned to be a reference for the judiciary on cases where there is no contract between publishers and authors. On Sunday, 20 publishers added the final details to the 62 guidelines outlined in “The Norms and Rules of the Profession,” explained the association’s chairman Essam Shalaby. Authors were represented in the meeting by Egyptian Writers Union’s member Sherif al-Gayar. [Egypt Independent, 10/9/2012]

Poet summoned for interrogation over contempt of religion
The New Cairo Prosecutor summoned poet Hisham al-Gokh over a claim filed by a lawyer accusing him of contempt of religion. Lawyer Salwa al-Faresy filed a complaint accusing Gokh of the contempt of religion in one of his poems, providing the part of the poem on which she based her claim. Gokh likened his beloved in the poem to Ka’bah, and used distorted verses from the Qur’an, Faresy said. [Egypt Independent, 10/9/2012]

US State Department talks Egypt aid with Congress
The US State Department is in talks with the Congress to unblock US$450 million of economic aid promised to Egypt, as part of $1 billion in debt relief to assist the transition to democracy, according to State Department spokesperson Victoria Nuland. “We feel very strongly that now is not the time to pull back from supporting these fragile democracies in North Africa and the Middle East. It’s time to support those who are trying to take their countries in a democratic direction,” Nuland said during a press conference Tuesday. Egyptian politicians accuse the US of using aid conditionality to exert influence over Morsi’s administration. [Egypt Independent, Ahram (Arabic), 10/10/2012]

Morsi arrives in Cairo after one-day visit to Uganda
Egyptian president Mohamed Morsi has arrived back in Cairo Tuesday evening after a brief one-day visit to Uganda’s capital Kampala, where he took part in the country’s celebrations of its 50th independence anniversary. During his visit, Morsi sat down with Ugandan president Yoweri Museveni, discussing bilateral relations and issues related to the countries of the Nile Basin region. [Ahram Online, Shorouk (Arabic), 10/9/2012]