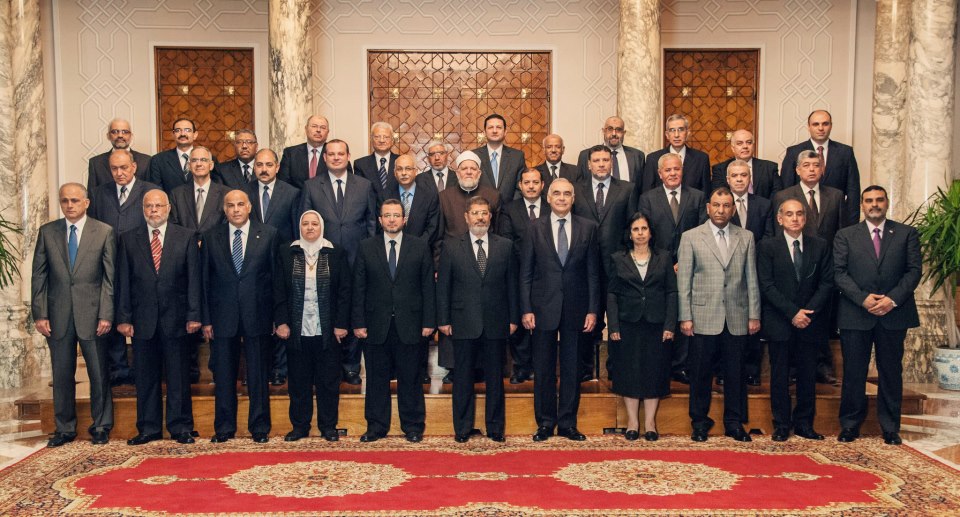 Nine new ministers announced, political forces react to cabinet reshuffle
A cabinet reshuffle was announced on Tuesday morning after days of expectations. The new reshuffle included nine ministries: justice, parliamentary affairs, petroleum, antiquities, agriculture, finance, planning, culture, and investment. The reshuffle replaced two ministers involved in crucial talks with the IMF, while the new Minister of Planning and International Cooperation, Amr Darrag, and Minister of Investment, Yehia Hamed, are members of the Muslim Brotherhood. The changes fell short of the opposition’s demand for a complete overhaul of Prime Minister Hisham Qandil’s administration. Ahram Online published a complete list of Egypt’s cabinet members after the reshuffle. The Nour Party, Wafd Party, April 6, and Sufi Council, were critical of the reshuffle, while former MP Mamdouh Ismail criticized the appointment of Darrag and Hatem Bagato, the latter of whom was named Minister of Parliamentary Affairs. The NSF described the reshuffle as a “cosmetic change.” Ghad Party leader Ayman Nour said that Qandil remaining in his post makes the reshuffle in vain. The Construction and Development party, the political arm of al-Jama’a al-Islamiya, welcomed the reshuffle, but expressed surprise over Bagato’s appointment. Freedom and Justice Party chairman Saad al-Katatni welcomed the formation of the new cabinet, affirming the FJP’s full support for the Government. On Twitter, Morsi called on people to not prejudge the new ministers, adding that the government welcomes constructive criticism. [Ahram Online, SIS, DNE, Reuters, AP, Aswat Masriya, 5/7/2013]

Shura: Foreign fears over NGO law are unjustified
Dr. Ahmed Fahmy, Chairman of the Shura Council, said that the draft NGO law, currently under debate “in principle,” is consistent with the broad societal dialogue with stakeholders on the draft law. He said that European countries’ fears of the project are not justified. Fahmy pointed out that the law will achieve the greatest societal consensus and greater transparency on the work of NGOs in Egypt, which play an important role in the community and a role in contributing to the revolution of January 25. Fahmy met on Tuesday with a German delegation headed by Harold Leibrecht. In response to the German delegation on the role of women in Egyptian political life, Fahmy said that the draft law on elections for the House of Representatives is currently before the Supreme Constitutional Court gives the opportunity to Egyptian women to actively participate in the elections, calling on political parties to include women on their electoral lists. [EGYNews (Arabic), 5/7/2013]

Dispute in Shura Council between FJP and Nour Party members over subsidies
The Economic Subcommittee of the Shura Council saw differences between the Nour Salafis and Freedom and Justice Party (FJP) on a number of budget items, especially on subsides, with the Nour Party calling for canceling export subsidies. Sayyid Aref led the Nour assault on subsidies, but Ashraf Badr al-Din of the FJP joined Mohammed Kholi, MP for the Egyptian Democratic Party, in rejecting the proposal. Kholi said that no light reduction or elimination of export subsidies could occur, stressing its importance to industry. Mohammed Fiqi, chairman of the Economic Subcommittee, also rejected a Nour proposal to reduce the number of embassies, after criticism of the Ministry of Foreign Affairs LE 2 billion budget. The heads of the committees plan to present their vision on the general budget in preparation to be sent to the Ministry of Finance. [El Watan (Arabic), 5/7/2013]

Lawyer reports her harassment in front of court to prosecutor general
Lawyer Doaa Mustafa filed a report on Tuesday to the prosecutor general accusing the president, the prime minister and the minister of interior of being responsible for the harassment she encountered outside the state security prosecution last week. Mustafa was allegedly attacked by security forces outside the court where she defended Abdel Rahman al-Araby, a member of the Popular Current, and one of eight tried for allegedly being Black Bloc group members. Mustafa stated she was prevented from filing a report at the police station regarding her attack last Tuesday [DNE, 5/7/2013]

Police captain to be retried for murder of protesters
Mohamed Sunni, a police captain convicted for the murder of protesters during the January 25 uprising, has had his sentence repealed and will be retried in the Court of Appeals. Sunni was sentenced to 5 years in prison for murdering 18 protesters and injuring 3 others outside the Zawya Hamra police station. Sunni received the death sentence in absentia, but after his surrender, he was retried, and his sentence mitigated to 5 years. [Shorouk (Arabic), EGYNews (Arabic), AMAY (Arabic), 5/7/2013]

Egypt’s tourism rates are close to the 2010 peak: Minister
Egypt received roughly 2.86 million tourists during the first quarter of 2013, a 14.4 percent rise compared with the same period of last year, announced tourism minister Hisham Zaazou. Zaazou added that tourist numbers during the period from January to March show that the sector is recovering, and is expected to reach 2010 levels, when an estimated 14.7 million tourists visited Egypt generating $12.5 billion in revenue. The number of Arab tourists visiting Egypt in the first three months of the current year rose by 7.5 percent compared to the first quarter of 2012, reaching 520,000. [Ahram Online, 5/6/2013]

Arrests by the Presidential Palace
Four members of the Popular Current and 6 April Democratic Front, including two women, were arrested Monday afternoon during a protest by the Presidential Palace. They are being detained on charges of disturbing the peace, inciting violence and blocking the flow of traffic, according to Ragia Omran, a human rights lawyer for No Military Trials for Civilians. They have not been charged with vandalism, Omran said. [DNE, 5/7/2013]

ANHRI denounces harsh sentences against protesters
The Arab Network for Human Rights Information (ANHRI) denounced on Sunday harsh prison sentences issued to six protesters. The detainees were arrested by court security on 30 April while holding a demonstration outside the court to show solidarity with eight people arrested and accused of involvement in the Black Bloc group. On 2 May, their case was referred to an urgent court hearing and the sentence was issued in a single hearing. They were sentenced for damaging the criminal court building, as well as a police truck and booth, insulting policemen, and causing unrest. A EGP 30,000 ($4,300) bail was set by court for each detainee. [DNE, 5/6/2013]

President Morsi to visit Brazil
Egyptian President Mohamed Morsi will fly to Brazil on Tuesday afternoon for a two-day visit. He will meet with top government and parliamentary officials, state news agency MENA reported. During his visit to the capital, Brasilia, President Morsi will hold talks with his Brazilian counterpart Dilma Rousseff as well as president of the Brazilian Senate, Renan Calheiros, to foster trade and investment cooperation between the countries.  Egyptian-Brazilian trade exchange now stands at $3 billion per year. [Ahram Online, DNE, SIS, EGYNews (Arabic), 5/7/2013]