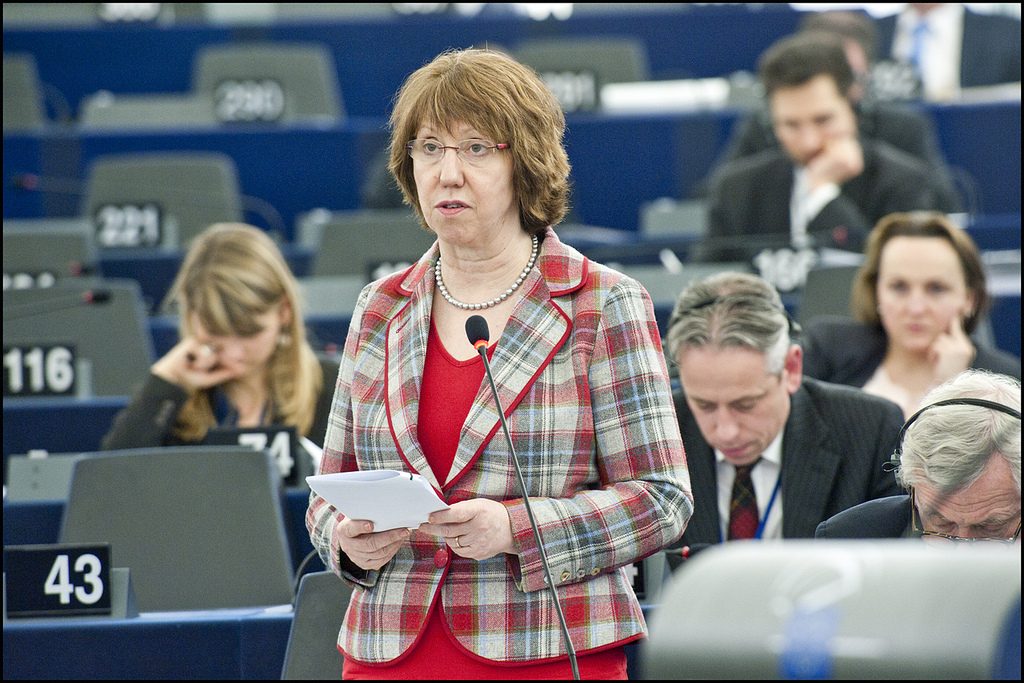 The EU should withhold budget support from Egypt unless it makes significant progress with human rights, democracy and the rule of law, say MEPs in a resolution passed on Thursday.

Presidency wants court to explain ruling that suspended elections
The presidency asserted its respect for the judiciary on Wednesday and demanded the Administrative Court explain two of the principles included in the 6 March court ruling that suspended the parliamentary elections. The statement comes one day after the State Litigation Authority appealed the 6 March ruling. The appeal will be considered by the Supreme Constitutional Court, Egypt’s highest court, on 17 March. Egypt’s Supreme Electoral Commission on (SEC) released a statement on Wednesday denying that it had filed an appeal against the ruling. [DNE, SIS, Ahram Online, Ahram (Arabic), 3/14/2013]

President Morsi to meet Port Said delegation Thursday
President Mohamed Morsi is set to meet Thursday with a delegation of Port Said residents at the presidential headquarters in east Cairo’s Heliopolis district. The delegation will include regional government officials as well as representatives of the families of victims from recent violence in the city. In a statement Wednesday, the presidential office said the meeting is aimed at addressing all demands of the Port Said people, whether economic, social or security-related. [Ahram Online, SIS, AMAY (Arabic), 3/14/2013]

FJP calls for considering court comments in new elections law
Head of the Freedom and Justice Party (FJP)’s parliamentary bloc, Essam Erian, called on Wednesday on the Shura Council (upper house of the parliament) to consider the comments of the Supreme Constitutional Court while drafting the new elections law. "The head of the Shura Council will send the new law to the Constitutional Court to review it before referring it back to the Shura Council for adaptation. The Council must commit to the Court’s comments," Erian said in a statement published on the Muslim Brotherhood’s website. Earlier this month, Erian had criticized demands to send the law back to the Constitutional Court to be reviewed after amendment. He said that sending it back would "bring us into a vicious circle." [Aswat Masriya, 3/14/2013]

New forensic committee will re-examine al-Gendy death
Cairo prosecution has decided to form a new forensics committee to re-examine the case of slain activist Mohamed al-Gendy. The new committee will include five academic members, including a professor of neurology. The initial forensic report issued 12 February claimed that al-Gendy, 28, a political activist and member of the Popular Current, died because of injuries sustained in an alleged car accident 28 January. [Ahram Online, 3/13/2013]

Food price rises put restive Egypt on edge, US to export wheat to Egypt
The specter of steep food price inflation driven by a weaker pound is of particular worry to President Mohamed Morsi as he grapples with spasms of unrest two years after the uprising that toppled Hosni Mubarak and was itself partly driven by a sense of mounting economic hardship in a country long steeped in poverty. Rising concerns have spread among bakers given the country’s current depleting wheat inventories and traditional methods of public tenders and letters of credit. The United States Department of Agriculture has approved wheat exports to Egypt under a credit guarantee program, according to Ashraf Ezz Eddin, head of Egypt’s commercial office in Washington. Egypt’s strategic stocks of wheat have fallen to 2.207 million tons, enough to last 89 days, a Cabinet report said on Wednesday. [Reuters, Egypt Independent, DNE, 3/13/2013]

‘Ministry of Finance owes contracting sector EGP 13bn in dues’
The Ministry of Finance owes EGP 13bn to Egyptian contracting companies in dues accrued since the 25 January Revolution, according to the CEO of the Egyptian Federation for Construction and Building Contractors (EFCBC) Hassan Abdel Aziz. “The Ministry of finance recognises only EGP 8bn of the owed money,” said Abdel Aziz. He also said that the sector’s problems with the ministry are not confined to the money owed. Taxes, social insurance, and other legal issues complete the list of grievances. [DNE, 3/13/2013]

Budget transparency in Egypt down after revolution
Post-revolution government in Egypt is less transparent than its predecessor, according to the Open Budget Index (OBI) 2012. Egypt scored 13 out of 100 on the survey conducted by the International Budget Partnership (IBP), marking a sharp decline on its score of 49 achieved in the previous OBI of 2010. “Egypt’s score indicates that the government provides the public with very little information on the national government’s budget allocation and spending activities during the course of the budget year, making it challenging for citizens to engage with the government in the decision-making process and to hold it accountable for its management of public funds,” said the Egyptian Initiative for Personal Rights (EIPR), IBP’s Egyptian partner. [Ahram Online, 3/13/2013]

Police blamed in Egypt revolt deaths
The highest-level inquiry into the deaths of nearly 900 protesters in Egypt’s uprising has concluded that police were behind nearly all the killings and used snipers on rooftops overlooking Cairo’s Tahrir Square to shoot into the huge crowds. The report, parts of which were obtained by The Associated Press, is the most authoritative and sweeping account of the killings and determines that the deadly force used could only have been authorized by Hosni Mubarak’s security chief, with the ousted president’s full knowledge. [Ahram Online/AP, 3/13/2013]

Minister of Interior addresses internal security from Riyadh
Minister of Interior Mohamed Ibrahim said the police are the only body tasked with maintaining security in Egypt and that the officers need the people’s support. The minister statements were made in Riyadh during the 30th Conference for Arab Ministers of Interior. He added that he rejects popular committees’ efforts to secure the country instead of the police, state-run news agency MENA reported. Ibrahim’s statements come after “popular committees” made up of al-Jamaa al-Islamiya members roamed the Upper Egypt governorate of Assiut, promising to bring residents security during what has been described as a “security vacuum”. [DNE, 3/14/2013]

Activists, Opposition call for new protest against Brotherhood
Activists called for protest Friday in front of the Muslim Brotherhood headquarters in Moqattam to demand President Mohamed Morsi step down. The campaign, known as Ikhwan Kazeboun or The Lying Brothers, made an open call to supporters on Thursday in a Facebook post. In response, Brotherhood spokesperson Ahmed Aref criticized the campaign, saying it has wrongly targeted the organization. Several major opposition movements and political parties are also calling for protests next Friday in Nasr City after Friday prayers. The protests will demand Morsi and the Muslim Brotherhood step down and the army to take control of the state, according to Mohamed Abu Hamed, head of the Hayat ElMasryeen Party. [Egypt Independent, DNE, 3/13/2013]

Morsi promises to compensate victims of Port Said violence
A presidential spokesperson said Thursday that families of those killed in recent Port Said violence would be compensated financially. Social communications advisor Emad Abdel Ghafour said Morsi had agreed to help during a meeting with Port Said families earlier Thursday at the Ettehadiya Presidential Palace in Heliopolis. The news comes as another Port Said resident died in hospital Wednesday due to inhalation of tear gas during protests. [Egypt Independent, 3/14/2013]

Egypt: No EU financial support if no progress on democracy, MEPs say
The EU should withhold budget support from Egypt unless it makes significant progress with human rights, democracy and the rule of law, say MEPs in a resolution passed on Thursday. They also call for the death sentences on 21 football supporters involved in the Port Said tragedy to be commuted and for a moratorium on all death penalties in Egypt. The EU should set clear conditions for its aid to Egypt, following the "more for more" principle, should it steer away from democratic reforms and respect for human rights and freedoms, the EP says. Civil society, women’s and minority rights must be the primary focus of EU aid, it stresses, recalling that the EU aid package of nearly EUR 5 billion for 2012-2013 is partly conditional on respect on human rights, democracy and economic governance. [European Parliament News, 3/14/2013]

Egypt’s Brotherhood slams proposed UN declaration on women’s rights
Egypt’s Muslim Brotherhood issued a statement on Wednesday denouncing a yet-to-be-ratified UN declaration on women’s rights, asserting that the document contradicts Islamic Law. The three articles that the Islamist group deems most objectionable are those granting women the "freedom of choice" to decide the gender of their partners; the provision of teenagers with contraception; and the provision of equal rights for homosexuals and the legal protection of prostitutes. The National Council for Women (NCW) denied in a statement released on Thursday that a declaration regarding violence against women currently being drafted in the 57th United Nations’ Commission on the Status of Women breaches Islamic Sharia. [Ahram Online, Aswat Masriya, DNE, AMAY (Arabic), 3/14/213]

Rubio To Introduce Measure To Block Aid To Egypt
Sen. Marco Rubio said Wednesday that Congress should use its 2013 spending bill to cut U.S. aid to Egypt until the Middle East nation adopts economic and human rights reforms. Mr. Rubio told The Washington Times that his proposed Egypt Accountability and Democracy Amendment would require that the country’s government enact reforms that protect the political, economic and religious freedoms and human rights of its citizens and residents before it gets another dime of U.S. taxpayers’ money. “Our foreign aid is not charity. Our foreign aid is used to advance our foreign policy interests,” Mr. Rubio said. “We have a right to be concerned.” (To see his speech, click here.) [Marco Rubio, Washington Times, 3/12/2013]