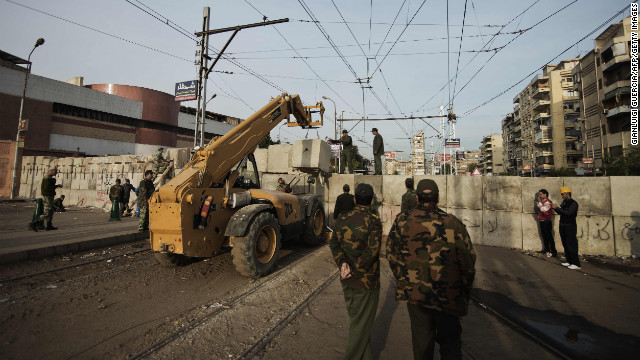 A concession offered by President Mohamed Morsi failed to placate opponents who accused him on Sunday of plunging Egypt deeper into crisis by refusing to postpone a vote on a constitution shaped by Islamists.

Opposition forces scorn Morsi’s concession
A concession offered by President Mohamed Morsi failed to placate opponents who accused him on Sunday of plunging Egypt deeper into crisis by refusing to postpone a vote on a constitution shaped by Islamists. Morsi had given some ground the previous day when he retracted a fiercely contested decree giving himself extra powers and shielding his decisions from judicial review. But the president insisted the constitutional referendum go ahead next Saturday and the Muslim Brotherhood, from which he sprang, urged the opposition to accept the poll’s verdict. The concession came in the wake of a ‘national dialogue’ meeting held on Saturday.Morsi attended briefly, along with Vice President Mahmoud Mekki, sitting down with over 40 figures. However, the majority of opposition political forces refused the president’s overtures. [Egypt Independent, Ahram Online, DNE, 12/9/2012]

Cabinet ‘surprised’ over decision to postpone sales tax increases
The Cabinet was not informed of President Mohamed Morsi’s decision to postpone a law on increasing commodity’ prices, and wasn’t consulted on the issue, an informed Cabinet source said. The Cabinet had issued a press release Saturday defending the decision ahead of being informed about the decision to suspend the law until a public discussion on it is held, the source said. The tax laws were introduced as part of an economic reform approved by the IMF three weeks ago, and would have increased taxes on about 50 kinds of goods, including steel, cement, fertilizers, cooking oil, cigarettes and electricity. [Egypt Independent, Ahram Online, 12/10/2012]

COURTS & CONSTITUTION
Prosecution orders inquiry into figures accused of ‘plotting to overthrow the govt’
Prosecutor General Talaat Ibrahim Abdallah referred to investigators Sunday a complaint that people from the judiciary, politics and journalism are "plotting to overthrow the government."
Judicial sources told the media that Abdallah instructed the North Giza public prosecutor to start a judicial investigation into the report. The list of people accused in the report include Tahani al-Gebali, vice president of the Supreme Constitutional Court; Ahmed al-Zend, head of the Judges Club; and Hamdeen Sabbahi, former presidential candidate. [Egypt Independent, DNE, 12/9/2012]

Egypt’s Judges Club to oversee referendum with preconditions
Egyptian Administrative State Council’s Judges Club announced it will oversee the national referendum slated to take place on 15 December, provided the ongoing sit-in by supporters of President Mohamed Morsi in front of the High Constitutional Court (HCC) ceases.The decision to man the polling stations was taken during a meeting held between the judges early Monday. The High Elections Commission (HEC) has received lists of names from different judicial bodies who will supervise the referendum. [Ahram Online, SIS, EGYNews (Arabic) 12/10/2012]

Egypt’s reserves fall in November, further drop expected in December
The drop in Egypt’s Net International Reserves (NIR) in November to $15.03 billion came as a result of political instability which took its toll on tourism and Foreign Direct Investment (FDI), Cairo-based investment house Beltone Financial said in a statement issued on Sunday.
The closely watched balance is also expected to see further drops in December. The Central Bank of Egypt (CBE) announced on Thursday that NIR dropped $449 million in November. The drop came despite the disbursal of the third tranche of the Qatari deposit in the CBE amounting $500 million. [Ahram Online, DNE, 12/9/2012]

Rival groups to rally on Tuesday
For the second week, rival political groups have planned pro and anti-President Mohamed Morsi demonstrations on the same day in Cairo. After its press conference on Sunday night, the National Salvation Front (NSF) called for mass protests on Tuesday against the constitutional referendum scheduled to take place on 15 December. Islamist forces are organizing three mass demonstrations in Cairo, Alexandria and Assiut on Tuesday, titled “National Consensus,” in support of President Mohamed Morsi’s push to complete a constitutional referendum by 15 December. The Salafi Nour Party has decided not to take part in a protest to be staged by Islamist powers Tuesday. [DNE, Egypt Independent, 12/9/2012]

Salafis to hold ‘Sharia First’ protest Monday at Media Production City
Multiple Salafi movements have announced mass demonstrations Monday outside Media Production City, under the title of “Sharia First,” to demand the dismissal of talk show hosts they consider “tools for burning the country.” Supporters of former Salafi presidential candidate Hazem Salah Abu Ismail, the Salafi Front, the Nour Party and the Coalition of Sharia Students issued a joint statement calling for a boycott of certain television channels and newspapers for their policies, which they say are against Islamists. On Sunday hundreds of Islamist protesters continued a sit-in held in front of Media Production City in 6th of October City.[Egypt Independent, DNE, 12/9/2012]

Morsi orders military to maintain security until referendum complete
President Mohamed Morsi issued a law on Sunday ordering the Armed Forces to maintain security and protect vital state facilities until the result of the 15 December referendum on the constitution is announced. In the law, the president granted military officers all arrest powers assigned to the police. [Egypt Independent, Ahram Online, DNE, EGYNews (Arabic) 12/9/2012]

Security heightened at presidential palace; sit-in continues
Security forces intensified their presence at the entrances and exits of Ettehadiya Presidential Palace, where dozens of officers from the Republican Guard and the Armed Forces are stationed, as well as popular committees formed by protesters. The number of protesters’ tents set up at the palace gate increased to about 46, and the number of protesters there increased after marches headed to the palace to join the sit-in Sunday. [Egypt Independent, Shorouk (Arabic) 12/10/2012]

Foreign minister criticizes quartet’s role in peace process
Foreign Minister Mohamed Kamel Amr criticized the Quartet on the Middle East’s role in the regional peace process, calling it “a total paralysis” and reiterating Egypt’s condemnation of Israeli settlement activities as a blow to the two-state solution for the Palestinian-Israeli conflict.
A ministry statement Monday quoted Amr’s remarks, which he made during a ministerial meeting Sunday by the Arab Peace Initiative follow-up committee in Doha. [Egypt Independent, 12/10/2012]

President of UN General Assembly in Cairo
Minister of Foreign Affairs Mohamed Amr criticised the United Nations Security Council during a meeting with Vuk Jeremić, president of the UN General Assembly.According to a statement released by the Ministry of Foreign Affairs Jeremić and Amr met on Saturday evening and discussed a number of topics including the UN Security Council, Palestinian statehood and the recently postponed conference on creating a weapons-free zone in the Middle East. [DNE, 12/9/2012]