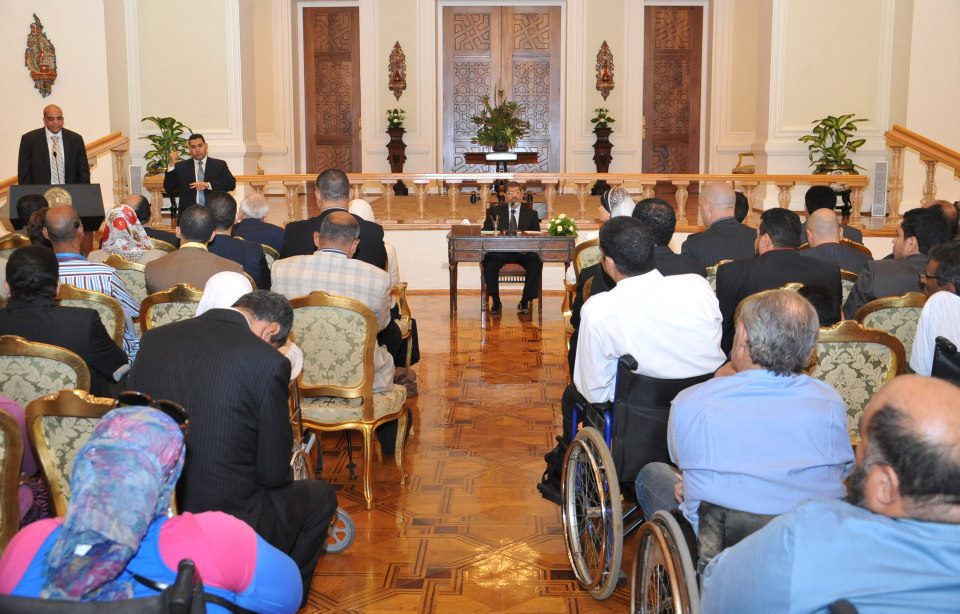 Opponents of the Constituent Assembly have rejected President Mohamed Morsy’s invitation for a dialogue, arguing that his call "lacks the clarity and mechanisms that ensure its earnestness."

Opposition rebuffs president’s invitation for constitution talk
Opponents of the Constituent Assembly have rejected President Mohamed Morsy’s invitation for a dialogue, arguing that his call "lacks the clarity and mechanisms that ensure its earnestness." Presidential spokesperson Yasser Ali had said in earlier press statements that Morsy planned to hold a meeting with party leaders, politicians and revolutionary groups. Despite turning down the president’s call for political conversation, the groups said the lack of national consensus over the Constituent Assembly requires "a serious national dialogue" that can set objective criteria for a balanced assembly. [Egypt Independent, EGYNews (Arabic), 10/24/2012]

Source: Election fraud allegations won’t force president from office
President Mohamed Morsy’s position will not be affected by a challenge from former rival Ahmed Shafiq over presidential election results, a source at the Presidential Elections Commission told state-run Al-Akhbar. On Monday, Chief Prosecutor Abdel Meguid Mahmoud opened an investigation into Shafiq’s complaint, which alleged incidents of ballot forgery and that Copts were prevented from voting in the runoff elections. Shafiq’s Egyptian National Movement Party claimed on its Facebook page Tuesday that Morsy took office as the result of a deal between the Muslim Brotherhood, the Freedom and Justice Party and the Supreme Council of the Armed Forces.  [Egypt Independent, AP, 10/24/2012]

Egypt’s VP meets young activists
Vice President Mahmoud Mekki met with youth activists on Monday to discuss growing political tensions in the country following the ‘Accountability Friday’ clashes in Cairo on 12 October. Members of the Egyptian Popular Current published a statement on Tuesday detailing the content of the seven-hour meeting. Mekki reportedly admitted that the presidency had failed to react rapidly to the 12 October clashes, which took place between opponents and supporters of President Morsi, because he was occupied with the prosecutor-general crisis. [Ahram Online, SIS, Daily News Egypt, 10/24/2012]

Morsy appoints new governor in Matruh
President Mohamed Morsy issued a decree on Monday appointing Major General Ahmed Helmy Fathi Al-Hatimi as the new governor of Matruh. Al Hatimi is replacing General Taha Mohamed Al-Sayed after a month long sit-in by various groups from the Matruh region calling for his resignation. One of the main demands of the protesters was for an end to military dominance of the governorate. The new governor was sworn in on Wednesday.[Daily News Egypt, Al Masry al-Youm (Arabic), 10/23/201]

Administrative Court non-decision gives assembly ample time to finish constitution
Egypt’s Supreme Administrative Court (SAC) decision on Tuesday to refer a lawsuit against Egypt’s Islamist-led Constituent Assembly – tasked with drafting a new constitution – to the High Constitutional Court (HCC) has heated up the ongoing debate on the fate of the constitution-drafting body. However, the ruling has also theoretically given assembly members more time to work out their differences over the contents of constitutional articles before the draft charter is put before popular referendum. The referral of the case to the court could represent another chapter of an ongoing struggle between the judiciary and the executive, and more particularly, the SCC and the dominating Brotherhood current. [Ahram Online, Egypt Independent, 10/23/2012]

Suspend Constituent Assembly until court verdict, says member
Constituent Assembly member Anwar Esmat El-Sadat has called the drafting of Egypt’s constitution to be frozen until the High Constitutional Court (HCC) delivers its verdict on the fate of the constitution-drafting body. The Supreme Administrative Court (SAC) on Tuesday referred a lawsuit against the Islamist-led assembly to the HCC. Chairman of the Egyptian Organization for Human Rights Hafez Abu Saada has also asked the assembly who is writing Egypt’s constitution to terminate its operations until a verdict on President Mohamed Mursi’s ratification of its makeup is reached. [Ahram Online, Aswat Masriya, 10/24/2012]

Egypt denies asking Algeria for $2bn aid
Egypt’s prime minister denied a report that he asked Algeria’s government for $2 billion to shore up a struggling economy during an official visit to the country this week, Egypt’s state news agency reported. Two official sources confirmed to Reuters on Monday that Cairo was seeking aid from energy-rich Algeria, although they said the form of assistance was not clear. One said the amount in question was around $2 billion. "The Egyptian government didn’t propose this request," MENA cited Prime Minister Hisham Kandil as saying in a meeting with Algerian media. [Ahram Online, 10/23/2012]

Egypt FDI stages recovery in first half of 2012
Foreign direct investment in Egypt has made a partial recovery following last year’s uprising, with inflows hitting $2.5 billion in the first half of 2012, a United Nations report said on Tuesday. The return of relative political stability and a series of high-profile acquisitions by mainly Arab investors helped Egypt bounce back from the $100 million net outflow it recorded in the first six months of 2011. [Ahram Online, 10/24/2012]

Unions, political parties reject decree to close stores by 10 pm
The Egyptian Federation of Independent Trade Unions together with a number of political forces on Tuesday rejected the Cabinet’s decree that as of 1 November, stores must close by 10 pm and cafes and restaurants by midnight. The federation, along with the Socialist Popular Alliance Party, the Tagammu Party, the Egyptian Social Democratic Party, and some Nasserist parties, demanded community dialogue over the decision before it is applied. [Egypt Independent, 10/23/2012]

Qatar’s Emir pays second visit to Morsy
Qatari Emir Sheikh Hamad bin Khalifa Al-Thani visited Cairo on Wednesday to meet with President Mohamed Morsy for the second time since the Egyptian president was elected. The two heads of state met at the Presidential Palace, reported state-owned MENA. The president and Emir addressed regional issues including the crisis in Syria and the Palestinian crisis following the Emir’s visit to Rafah. On Tuesday the Emir’s short trip to Gaza resulted in his inauguration of a $254 million investment project to rebuild areas damaged by Israeli airstrikes. The materials for the construction project will be brought in through Egypt and the Rafah border. [Daily News Egypt, Ahram Online,, EGYNews (Arabic), 10/24/2012]