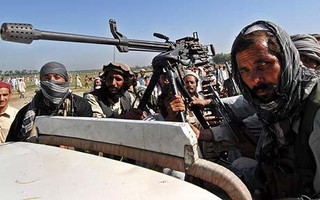 The Pakistani Taliban have set up camps and sent hundreds of men to Syria to fight alongside rebels opposed to President Bashar al-Assad, militants said on Sunday, in a strategy aimed at cementing ties with al-Qaeda’s central leadership.

Interim PM meets ministerial candidates; to focus on six main issues
Prime Minister Hazem al-Beblawi met on Sunday with potential candidates for the interim cabinet. Ziad Bahaa Eddin, candidate for the post of minister of international cooperation, has said that the new cabinet will only focus on six main priorities: restoring security to the streets, operating factories where work has been suspended, regulating public finance, pushing the political process forward, conducting fair elections, and providing resources, without increasing the budget deficit, to supply low income families with services and jobs. Bahaa Eddin added that this would require legislation for free information. [Egypt Independent, DNE, 7/15/2013]

Senior US diplomat meets Egypt’s interim leaders
US Deputy Secretary of State William Burns held talks Monday with Egypt’s interim leaders as well as the head of the military in the highest level visit by an American official since the Egyptian army ousted the country’s first democratically elected leader.  The State Department said Burns would meet "civil society groups" as well as government officials, but the Islamist Nour Party and the Tamarod anti-Morsi protest movement both said they had turned down invitations to meet Burns. [AP, Reuters, 7/15/2013]

At least three killed in attack on bus carrying workers in Egypt’s Sinai
At least three people were killed and 17 wounded early on Monday in Egypt’s North Sinai province when suspected militants fired rocket-propelled grenades hitting a bus carrying workers employed at a cement factory, security and medical sources said. Military spokesperson Ahmed Mohamed Ali claimed that a police truck was the actual target of the deadly assault, but the attackers had bombed the factory bus by mistake.
[Reuters, Mada Masr, 7/15/2013]

New Egypt minister says no need for IMF aid now
Aid from Arab states will carry Egypt through its transition period, and it does not need to restart negotiations with the IMF now, Minister of Planning Ashraf al-Arabi said. Al-Arabi, a US-educated economist who served in the same post under deposed president Mohamed Morsi until May, joins a government led by liberal economist Hazem el-Beblawi. Beblawi has named economists to several senior posts so far. [Reuters, 7/15/2013]

Army chief criticizes Zidan for not building Libyan army
Acting Army Chief of Staff Salem Gnaidi criticized Prime Minister Ali Zidan for not making more efforts to build the Libyan army and for focusing on building a national guard instead. The government, however, repealed a resolution last week to set up a national guard, and the General National Congress is expected to make a new law to establish a similar security force. The solution for the Libyan army, Gnaidi said, was for a high council of defense composed of patriotic Libyan soldiers without political partisanship to get rid of regional and political allegiances, which are currently holding back the army. [Libya Herald, 7/14/13]

Zuetina oil fields and ports still closed by protests
Oil production and export remain at a standstill for the Zuetina Oil Company, as protests at the oil fields and export terminal enter a third week, according to the Libya Herald. Reuters reports that operations have resumed but so far only oil stored at the terminal is being exported as oil fields remain shut down by striking workers whose demands include holiday pay and wage increases to reflect the high-risk nature of their jobs. A Tripoli-based Zuetina employee said that the protestors’ demands had already been met. [Libya Herald, 7/15/13]

GNC backs new Islamic affairs minister
The General National Congress (GNC) has overwhelmingly endorsed Ali Mohamed al-Bashir as the new minister of Islamic affairs, thus bringing to an end a long-term source of tension between it and Prime Minister Ali Zidan. Zidan had been criticized for ignoring the former minister of that post, preferring to work through the deputy instead. This June, the Committee on Awqaf and Islamic Affairs accused the prime minister of deliberately sidelining the ministry. Meanwhile, Zidan has appointed deputy culture minister, Abdussalam Sabri Sharif of Benghazi, as the official government spokesman. [Libya Herald, 7/14/13]

Sirte banks close in protest of armed robberies
The doors of Sirte banks were locked Sunday in protest of the recent spate of bank robberies and what is seen as the deteriorating security in the town. Managers and employees staged protests outside the locked doors of their banks. “They are asking the Libyan police and army to protect them against armed militias that are carrying out these robberies,” commander of the military zone of Sirte, Salah Abu Haligha, told the Libya Herald. Haligha attributed the town’s security issues to poverty, the proliferation of weapons, and disaffected youth. [Libya Herald, 7/14/13]

Syrian troops advance in Damascus
Government troops fired tank shells and artillery in heavy clashes between Syrian forces and rebels Sunday on the edge of Damascus, where the military has been pushing its offensive to retake key districts that have been in opposition hands for months. A Syrian military commander said forces loyal to President Bashar al-Assad have recaptured 60 percent of Jobar, one of the embattled districts on the fringes of Damascus, and were trying to retake the rest. [Daily Star/AP, 7/14/2013]

Pakistan Taliban set up camps in Syria, join anti-Assad war
The Pakistani Taliban have set up camps and sent hundreds of men to Syria to fight alongside rebels opposed to President Bashar al-Assad, militants said on Sunday, in a strategy aimed at cementing ties with al-Qaeda’s central leadership. The announcement made by Taliban commanders further complicates the picture on the ground in Syria, where rivalries have already been on the boil between the Free Syrian Army and the Islamists. [Reuters, 7/14/2013]

UN envoy in Syria as child toll mounts
The United Nation’s special envoy on children in war was in Syria for talks on Monday, as concern mounts over the rising child death toll in the bloody two-year conflict. Six children were among twenty-nine people killed in a devastating army bombardment of five villages in northwest Syria as residents prepared to break the daytime fast observed by Muslims during the holy month of Ramadan, a watchdog reported on Monday. [Daily Star/AFP, 7/15/2013]

Thousands protest in Tunis against Morsi’s ouster
Several thousand people protested in central Tunis on Saturday against the Egyptian army’s overthrow of former president Mohamed Morsi in a demonstration organized by Tunisia’s ruling Islamist Ennahda party. There was a heavy security presence in central Tunis for the authorized protest after permission for a previous pro-Morsi demonstration organized by Ennahda was rejected last week. [AFP, 7/14/2013]

Tunisia’s Tamarod steps up campaign to dissolve parliament
Tunisia’s Tamarod has continued its campaign to collect signatures for a petition demanding parliament be dissolved, despite facing threats and media speculation. Mohamed Bennour, coordinator of the Tunisian Tamarod movement, said the campaign was founded in response to demands by Tunisians who were angered by learning that parliament has spent around $100 million on writing a constitution that has yet to be completed. [Egypt Independent, 7/14/2013]

Deputy of Southern Movement Supreme Council killed
Mohammed Fadhl Jubari, Deputy of the Supreme Council of the Southern Movement, or Hirak, was buried on Saturday, three days after he was shot and killed in al-Dale city. Al-Dale Security Chief Brigadier Ali al-Amri said the southern leader was assassinated on Thursday by armed men in front of a hotel in the center of the city. His killers rode a motorcycle, he said. [Yemen Times, 7/15/2013]

Houthi and Islah affiliates clash over microphone use at a local mosque
Eight people, including two soldiers, were injured on Friday after a dispute between alleged Houthi and Islah affiliates about the use of a mosque’s microphone during the Ramadan Taraweeh prayer. According to several eyewitnesses, an unidentified armed group arrived in buses and began attacking those around the mosque. Gunfire is reported to have been heard for over an hour. Two bombs were thrown during the clashes, a grenade and a sound bomb, according to Dr. Omar Abdulkareem, Sanaa’s security chief. [Yemen Times, 7/15/2013]

Hadi to announce human rights committee to investigate violations in 2011
Minister of Legal Affairs Mohamed al-Mikhlafi said that President Abdrabo Mansour Hadi will issue a decree before September that will establish an independent committee to investigate human rights violations in 2011. The committee will be composed of eleven legal experts and individuals accepted by all political factions. The committee is a branch of the transitional justice effort, and will operate under international standards. He further added that members will be given immunity from prosecution to carry out their work effectively. [Yemen Press, 7/15/2013]

Jordan renews support for Egypt; Refugees stranded on Jordanian-Syrian border
Foreign Minister Nasser Judeh met with Egypt’s caretaker President Adly Mansour where he expressed Jordan’s support for Egypt’s transition. Meanwhile, some one hundred Syrians crossed into Jordan early Sunday, up from fourteen over the past forty-eight hours, yet well below a previous influx which once averaged some 1,500 refugees per day. Hundreds of Syrians reportedly remained stranded along the border with Jordan on Sunday as intensified fighting across southern Syria entered its tenth straight day. [Jordan Times 7/14/2013, Jordan Times 7/14/2013]

Kuwait delivers free fuel to Egypt
Kuwait has delivered crude oil and diesel worth $200 million to Egypt as part of a $4 billion aid package to bolster its faltering economy, a newspaper reported on Sunday. Two tankers, one carrying around 100,000 tons of diesel and the other 1.1 million barrels of crude, have docked in Egypt. The state news agency KUNA said last week that Kuwait’s aid package would comprise a $2 billion central bank deposit, a $1 billion grant and $1 billion in oil products. It did not say when the aid would be delivered. [Al Arabiya 7/14/2013, Reuters 7/14/2013]