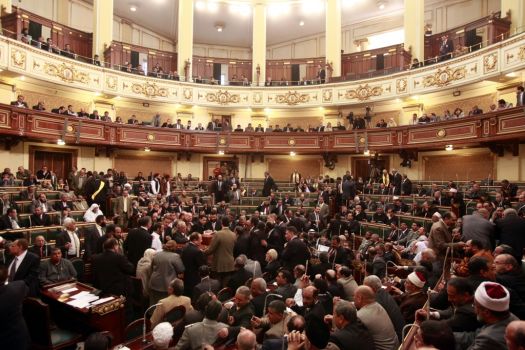 On March 11, the People’s Assembly called for a vote to end U.S. military aid to Egypt, with MPs complaining that the U.S has no respect for Egypt’s sovereignty. However, even if parliament votes reject U.S. aid, the move could turn out to be a primarily symbolic gesture, given the SCAF’s monopoly over executive powers.

1) Registration for the presidential election began on March 10. The official campaign period will begin on  April 30, after the final list of candidates is announced on April 26. The Presidential Election Commission has received 375 candidate applications in three days. [al-Ahram, English, 3/12/2012] [al-Masry al-Youm, Arabic, 3/12/2012]

2) Al-Wasat chairman Aboul Ela Madi said the party will attempt to broker a deal between Abdel Moneim Aboul Fotouh and Mohamed Salim El-Awa whereby one of them will withdraw from the presidential race in exchange for the vice presidency. [al-Ahram, English, 3/12/2012]

4) Muslim Brotherhood spokesman Mahmoud Ghozlan announced on March 10 that any Brotherhood members who break with the group’s official stance to back Dr. Abdel Moneim Abouel Fotouh will be expelled. [al-Ahram, English, 3/12/2012]

5) On March 11, People’s Assembly Speaker Saad al-Katatni asked the parliament to approve a motion to vote for a withdrawal of confidence from the government of Prime Minister Kamal  Ganzouri. An anonymous senior official said that the cabinet will not resign, despite pressure from parliament. [al-Masry al-Youm, English, 3/12/2012]

6) On March 11, the People’s Assembly called for a vote to end U.S. military aid to Egypt, with MPs complaining that the U.S has no respect for Egypt’s sovereignty. However, even if parliament votes reject U.S. aid, the move could turn out to be a primarily symbolic gesture, given the SCAF’s monopoly over executive powers.  [Washington Post, English, 3/12/2012]

7) The People’s Assembly called for the expulsion of the Israeli ambassador from Egypt and the withdrawal of the Egyptian ambassador from Tel Aviv to protest Israel’s policies in Gaza. [al-Masry al-Youm, Arabic, 3/12/2012]

8) Comments from prominent cleric Youssef Qaradawi and Brotherhood spokesperson  Mahmoud Ghozlan over Syrian activists in the UAE have raised bilateral tensions. After Qaradawi criticized the UAE’s deportation of Syrian activists and their families from the Gulf state, Dubai’s police chief, Dhani Khalfan, responded with a warning suggesting that if Qaradawi continued to attack the UAE or its leaders, Khalfan would request that Interpol issue an arrest warrant for the cleric. On March 12, Arab League Secretary General Nabil al-Araby expressed disapproval of Ghozlan’s comments, which he described as "hostile." [al-Ahram, English, 3/12/2012] [al-Masry al-Youm, English, 3/12/2012]

9) Thirteen Egyptian NGOs signed a joint statement on March 11 condemning “attempts by the government to manipulate the judiciary by filing spurious, politically motivated charges against unregistered foreign non-governmental organizations.” The statement called for the dismissal of the case against foreign-funded NGOs, saying the investigation is “fundamentally nothing more than a political campaign against human rights  groups” [CIHRS, Arabic, 3/12/2012]

10) A military court in Egypt has acquitted an army doctor accused of carrying out forced "virginity tests" on female protesters in March 2011. [BBC, English, 3/12/2012]

11) Egypt’s Ministry of Finance expects the budget deficit for the fiscal year that ends in June to widen to 150 billion Egyptian pounds ($25 billion), higher than previously forecast. [Bloomberg, English, 3/12/2012]

12) On March 8, the IMF announced that Egypt had recently handed over details of its economic plans and that a delegation would visit Cairo later in March for further discussions on the requested $3.2 billion dollar loan. [Reuters, English, 3/12/2012]

13) The government has agreed to extend the monthly minimum wage of LE 700 for public sector employees to the more than half a million Egyptian government employees on temporary contracts, at an additional cost of LE 5 billion per year. [al-Ahram, English, 3/12/2012]

14) Field Marshal Tantawi said the government had budgeted 750 million pounds for the parliamentary and presidential elections but that the votes had cost 1.5 billion so far. [Reuters, English, 3/12/2012]