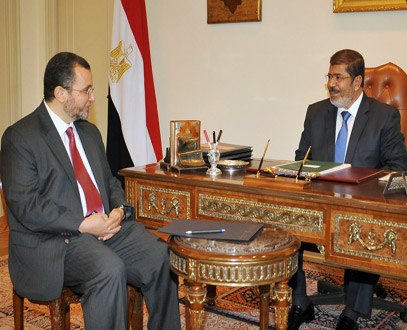 Egyptian Prime Minister Hisham Qandil, widely criticised as colorless and ineffectual, will keep his job in a limited cabinet reshuffle to be announced within days, a presidential spokesman said on Wednesday. Spokesman Ehab Fahmy told a news conference: "It is a limited reshuffle and the prime minister is not included."

PM to stay in Egypt reshuffle; Sources claim top prosecutor may join next Cabinet
Egyptian Prime Minister Hisham Qandil, widely criticized as colorless and ineffectual, will keep his job in a limited cabinet reshuffle to be announced within days, a presidential spokesman said on Wednesday. Spokesman Ehab Fahmy told a news conference: "It is a limited reshuffle and the prime minister is not included." Meanwhile, sources close to Prosecutor General Talaat Abdallah said Tuesday that the Justice Ministry and Muslim Brotherhood’s Guidance Bureau are discussing a possible position for Abdallah in the next Cabinet. Fahmy denied rumors claiming Pakinam Sharqawi and Essam al-Haddad have been nominated for cabinet positions. [Egypt Independent, Ahram Online, Reuters, EGYNews (Arabic), Shorouk (Arabic), AMAY (Arabic), 4/24/2013]

Legal adviser to Egypt’s president resigns, says Brotherhood “monopolizing” rule
The legal adviser of Egypt’s Islamist President Mohammed Morsi resigned Tuesday, alleging that the Muslim Brotherhood has monopolized decision-making and encroached on the governing of the country. The resignation letter by Mohammed Fouad Gadallah brought the harshest criticism yet from inside the presidency. In a statement outlining the reasons for his resignation, Gadallah accused the government of neglecting to engage the youth in the “defining moment in the history of Egypt”, interfering in the judiciary, and allowing an economic collapse, as well as the inability to resolve the Prosecutor-General crisis and hold national dialogue for all political powers to reach consensus. He also considered the continuation of Prime Minister Hisham Qandil’s government as another reason for his resignation. The resignation brings the number of presidential advisors to have resigned to 11 out of an original 17. [AP, Egypt Independent, DNE, Ahram Online, Reuters, SIS, 4/23/2013]

Judicial authority law will not pass without judges’ approval
The Shura Council would not approve any amendments to the judicial authority law without referring it first to the Supreme Judicial Council and other judicial bodies for approval, said the Head of the Councils’ Legislative Committee Mohamed Tosoun on Wednesday. According to EGYNews, however, the committee has agreed to the law in principle. Nobel Laureate and leading opposition figure Mohamed ElBaradei asked Egypt’s president Mohamed Morsi to withdraw the judicial authority draft law describing it as a project to "destroy the judicial authority." Ahmed al-Zend, the head of the Egyptian Judges Club filed a claim against the president, prime minister and head of the Shura Council to prevent the law from being issued. [Aswat Masriya, Ahram Online, Shorouk (Arabic), EGYNews (Arabic), Youm7 (Arabic), 4/24/2013]

Cathedral attack investigators fail to charge perpetrators as yet
A fact-finding mission tasked with investigating the attack on St. Marks’ Coptic Orthodox Cathedral has not identified any of the perpetrators as yet.  In a report released Tuesday, members of the mission said no one has been charged with inciting violence during the Abbassiya clashes earlier this month, despite the fact that 45 cases have been filed with the Public Prosecution. The report included the testimony of Makari Habib, Pope Tawadros II’s secretary, who accused the Interior Ministry of being "slow" in securing the cathedral. [Egypt Independent, 4/23/2013]

Prosecutor who ordered 80 lashes back on the job pending investigation
The Minya Governorate district attorney who ordered a man found drunk and in possession of hashish to be lashed 80 times returned to work Tuesday, despite a pending investigation into the incident. A judicial source said Hussein Anan was allowed to return to work, but will not receive a promotion for three years as part of a “deterrent” penalty. [Egypt Independent, 4/23/2013]

IMF delegate claims Egypt loan to be finalized in May
Egypt and the International Monetary Fund have agreed on the main aspects of a US$4.8 billion loan and the deal will be ready for implementation by the end of May, predicted regional IMF representative Abdel Shakour Shaalan. However, an independent report by investment bank EFG Hermes said the government’s draft fiscal year 2013/2014 budget "calls for a highly optimistic scenario for economic growth and public revenues." It said planned tax reforms in May and subsidy reforms in July make up a timeline that is "highly unlikely." Meanwhile, the IMF released a report showing that Middle East and North Africa (MENA) governments spend $236.7bn in energy subsidies, which is 50% of the $480.6bn total energy subsidies bill footed by governments worldwide. The report showed that the MENA subsidy bill is about 8.5% of regional GDP, representing 22% of government revenues. [Egypt Independent, DNE, EGYNews (Arabic), 4/23/2013]

Egypt’s pound drops to new low against dollar
Egypt’s ailing pound continues its depreciation, recording a new all-time low on Tuesday with an average of LE6.92 to the dollar, data from the Egyptian central bank showed. "It is traded in the black market with an average of LE7.55 to the dollar," said Hani Genena, the head of research at Pharos Investment Bank. Genena added that the Egyptian pound would take time to recover from devaluation, as there are liabilities the government needs to address in order to restore the stability of the currency. [Ahram Online, 4/23/2013]

Bedouins say Sisi mulling land ownership laws
A senior Bedouin leader said Tuesday that Defense Minister Abdel Fattah al-Sisi is mulling changes to a law banning land ownership as well as the release of Sinai prisoners that have served half their sentences. The announcement came during a meeting with Sisi and around 100 tribal leaders. Prime Minister Hisham Qandil said the law regulating possession of Sinai land will not be applied retroactively. [Egypt Independent, SIS, 4/23/2013]

Competition over judicial independence
Islamist movements have called for another “purging of the judiciary” demonstration on Friday. The call is in response to the Supreme Constitutional Court scheduling its decision to possibly disband the Shura Council on 12 May. The Brotherhood Youth group said it would take part in the demonstration, while the Muslim Brotherhood, the Salafi Front, Salafi al-Fadila and al-Asala parties said they would decide on Wednesday. Meanwhile, hundreds of protesters staged a demonstration in Tahrir Square against President Mohamed Morsi and the Muslim Brotherhood on Tuesday, while hundreds of lawyers staged protests outside a Cairo court to defend the independence of the judiciary. Egyptian President Mohamed Morsi faced a mounting revolt against Islamist attempts to force out thousands of judges when his own legal adviser quit on Tuesday, three days after the justice minister tendered his resignation. [Egypt Independent, Reuters, Aswat Masriya, DNE, 4/23/2013]

ANHRI calls for amendment of constitution
The Arab Network for Human Rights Information (ANHRI) released a statement on Monday evening  saying it was “deeply alarmed” by the decision to sentence a man to 80 lashes for being drunk. The sentence was handed down by the Matay Centre prosecutor in the Minya governorate, but was overturned by the Prosecutor General. ANHRI said the sentence was based on the viewpoint of one individual who used a constitutional provision which states that Sharia is the main source of legislation as the basis for the sentence. ANHRI added that the text of the constitution lacked clarity in the application of Sharia. [DNE, 4/23/2013]

Obama and Al-Thani want democracy for Egypt
Qatari Emir Sheikh Hamad bin Khalifa al-Thani and United States President Barack Obama said they are both committed to democracy in Egypt. The two leaders held talks on Tuesday during al-Thani’s visit to the US. Obama and al-Thani expressed hope in the success of Egypt’s transition to democracy, state-run news agency MENA reported. Al-Thani had begun an official visit to the US to discuss regional and international matters as well as bilateral relations between the Gulf country and the United States on Monday. [DNE, 4/24/2013]

Pentagon chief heads to Egypt in Mideast tour
US Defense Secretary Chuck Hagel travels to Egypt Wednesday as part of a Middle East tour designed to bolster America’s alliances amid growing concern over the fallout from Syria’s roiling civil war. In his first trip to the Middle East as Pentagon chief, Hagel is promoting longstanding US military ties with traditional allies — including Israel and Saudi Arabia — as a way of countering Iran and deterring Islamist militants. Hagel’s visit will include talks with Egyptian President Mohamed Morsi and military officials in order to reaffirm relations with Washington’s traditional allies in the region, reported the Middle East News Agency. Hagel is scheduled to discuss military support and strategic ties with his Egyptian counterpart Abdel Fattah al-Sisi as Egypt receives U.S. military aid. [AFP/Egypt Independent, Aswat Masriya, AP, Shorouk (Arabic), 4/24/2013]

Government’s decision to accept $450m in American aid receives prospective approval
In a recent meeting held with Prime Minister Hisham Qandil, Egypt’s government agreed to accept American aid aimed at helping to fund the country’s new cash transfer program, a part of Egypt’s broader economic reform package. The decision is expected to pass within the next several days. The agreement, initially signed on 17 March, stipulated that the United States Agency for International Development (USAID) provide Egypt with $190m of the $450m of aid it is expected to receive from the United States. Meanwhile, the Egyptian-American Enterprise Fund announced a $300m project, of which $60m has already been provided, with the remaining amount to be released over a period of 3 years. [DNE, EGYNews (Arabic), 4/23/2013]