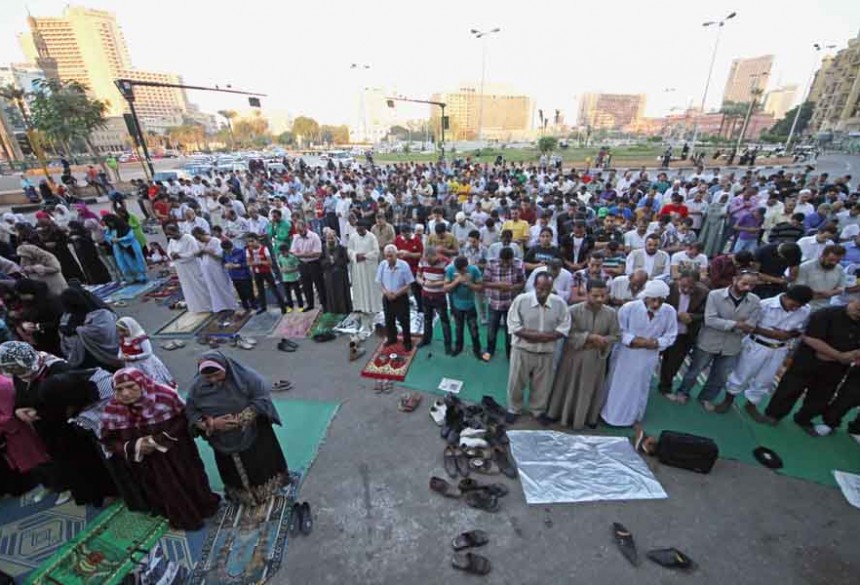 A statement issued by the Youth for Freedom and Justice Movement on Thursday said a policeman at a checkpoint in Nasr City arrested one of its members, along with a member of the Popular Current’s executive board, early in the morning.

Ministry warns against political campaigning in mosques
The Endowments Ministry on Thursday warned against the use of mosques and prayer areas for political campaigning during Eid al-Adha prayers, and called on preachers to urge people to engage in politics without showing bias toward a certain political orientation. Deputy Endowments Minister Mohamed Abdel Razeq said the ministry will not allow the use of mosques for political activity, adding that the ministry will be strict with anyone who exploits the holiday. [Egypt Independent, Al Jazeera Mubashir (Arabic), 10/25/2012]

Alleged court rioters referred to prosecution
Security authorities in Cairo on Thursday referred nine people who were arrested for allegedly rioting in the South Cairo Court Wednesday to the public prosecution for investigation. The nine people are accused of created chaos in the courtroom and damaging seats in the room, frightening the people present after the judge sentenced two of their relatives to three years in prison for possessing unlicensed weapons. [Egypt Independent, 10/25/2012]

Egypt: Qandil – Agreement to Establish Egyptian Industrial Zone in Algeria
Prime Minister Hisham Qandil said on Wednesday 24/10/2012 that Egypt will establish an industrial zone in Algeria to produce construction materials the North African country needs. His two-day visit was meant to increase the flow of Egyptian investments to Algeria, he said in a press conference. He talked about an "ambitious" plan to build some 2.5 million residential units in Algeria until the end of 2014, noting that Egyptian construction companies will have a big share in this project. [allAfrica, 10/25/2012]

President Morsi, time is up for appeasing ‘secularists’: Salafist sheikh
Egypt’s new constitution must reflect "God’s rule" or "we will put it under our shoes," a Salafist sheikh in northwest Egypt has said during Eid prayers. Addressing worshippers at a mosque in the coastal city of Marsa Matrouh, Salafist Sheikh Ali Ghalab said that President Morsi should stop appeasing "secularists" and that he must now fight them head-on. [Ahram Online, 10/26/2012]

Zabaleen: Egypt’s traditional garbage collectors struggle for recognition
The Zabaleen, Egypt’s traditional garbage collectors, had hoped that the country’s new Islamist government would meet their longstanding demands, in terms of both legal recognition of their trade and improved living conditions. But this, they say, has not appeared to be the case. The consequences have been catastrophic as Cairo’s mountainous waste piles continue to build up, raising the threat of infectious disease along with numerous other health hazards. [Ahram Online, 10/25/2012]

Police arrest two activists from Nasr City checkpoint
A statement issued by the Youth for Freedom and Justice Movement on Thursday said a policeman at a checkpoint in Nasr City arrested one of its members, along with a member of the Popular Current’s executive board, early in the morning. The statement said that Popular Current member Khaled al-Sayyed and youth activist Mina Coseman had an argument with police after one of the policemen insisted on taking Sayyed into the police station for no clear reason. The statement added that the police fabricated charges against the two activists, accusing them of assaulting the policemen. [Egypt Independent, 10/25/2012]

Uganda: Egyptian Diplomat Wanted for Trafficking Ugandan Girls
The Uganda government is in a legal and diplomatic dilemma over an Egyptian diplomat it accuses of trafficking in humans. The incident happened in Kampala in June, but the official has since been transferred back to Cairo. The Observer has learnt from various sources that police, the Director of Public Prosecutions and the ministry of Foreign Affairs have been cautious in their approach for fear of causing a diplomatic row. [allAfrica, 10/25/2012]

Egypt Says US Consulate Attack Suspect Was Libyan
A man suspected of links to the deadly attack on the U.S. Consulate was a Libyan national who turned his rented apartment into a small weapons cache before he died, an Egyptian security official said Thursday. The suspect identified as 35-year-old Karim el-Azizi detonated an explosive device on Wednesday after briefly exchanging gunfire with security forces that had surrounded his building in Cairo’s northern suburb of Nasr City, the official said. The blast set fire to the apartment and destroyed parts of the building. [AP, 10/25/2012]\