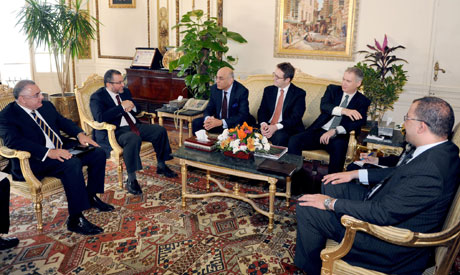 Informed sources within the Salafi Nour Party said Tuesday that leaders are mobilizing forces to demand the government dismiss Hesham Qandil’s Cabinet and the prosecutor general. The Freedom and Justice Party also called for a major government shuffle on Tuesday. The Conscience Front and al-Wasat’s parliamentary bloc also called for the resignations of Minister of Information Salah Abdel Maqsoud and Minister of Justice Ahmed Mekki in a press conference.

Political forces rally to bring down cabinet
Informed sources within the Salafi Nour Party said Tuesday that leaders are mobilizing forces to demand the government dismiss Hesham Qandil’s Cabinet and the prosecutor general. The sources added that the party is devising a roadmap to create a front uniting opposition and revolutionary forces. The Freedom and Justice Party also called for a major government shuffle on Tuesday. According to a statement, the party is demanding President Mohamed Morsi dismiss the ministers of electricity, environment, petroleum, finance, culture and water management, as well as the governors of Alexandria, Sharqiya, Port Said, Beheira and Qena. The Conscience Front and al-Wasat’s parliamentary bloc also called for the resignations of Minister of Information Salah Abdel Maqsoud and Minister of Justice Ahmed Mekki in a press conference, on Tuesday. [Egypt Independent, DNE, Shorouk (Arabic), 4/17/2013]

Auditing agency calls for greater oversight of govt bodies
Hisham Geneina, head of the Central Auditing Organization, is calling for greater financial and legal oversight into government bodies, including the General Intelligence Service. “There are attempts to keep those bodies mysterious on the grounds that the nature of their work is secretive,” he said in a statement Tuesday. “This is unjustified and paves the way for corruption.” He said the Justice Ministry is preparing a draft law on the freedom of accessing information. “This law would be futile if other laws protect certain bodies against disclosing information. [Egypt Independent, 4/17/2013]

Egyptian court slams PM Qandil with suspended prison sentence
The Dokki Misdemeanor Court on Wednesday gave Prime Minister Hisham Qandil a suspended sentence of one year in prison with a LE2,000 bail, on charges of abstaining from implementing a verdict by the Administrative Court that ordered the renationalisation of the Tanta Flax and Oil Company, and rendered invalid the selling of the company to Saudi businessman Abdullah Al-Kaaki. A spokesman for the cabinet, Dr. Alaa Hadidi, said the ruling the prime minister was issued against his office and not in any personal capacity. He also said the suspended sentence for imprisonment and removal from office was issued in absentia and the government plans to appeal the verdict. [Ahram Online, EGYNews (Arabic), 4/17/2013]

Coptic man charged with Muslim’s murder in Khosous investigation
Prosecutors have ordered three Coptic men accused of igniting sectarian fighting in Khosous detained four days pending investigation. Naguib Samir Iskander, the chief suspect in the case, his father, Samir Iskander, and Nasim Farouk Awad turned themselves in to police Monday, fearing they would be targeted. Their arrest Tuesday brings the number of detained in the case to 35. Al-Shorouk newspaper reported Wednesday that the prosecution charged Naguib Iskander with the murder of Mohamed Mahmoud Mohamed, as well as other charges including possession of a firearm and sparking sectarian strife. [Egypt Independent, 4/16/2013]

Court to try Mubarak in killing protesters on May 11
A Cairo appeals court has set May 11 to rule in the case of killing protesters where former President Mohamed Mursi is a defendant with his sons and interior minister Habib al-Adly among others. Mubarak, who received a life sentence last June for failing to protect peaceful protesters during the revolution, was granted a retrial in January due to procedural irregularities in the initial trial. State security prosecution decided Tuesday to detain Alaa and Gamal Mubarak, sons of ousted President Hosni Mubarak for 15 days pending investigations in the case known in the media as the ‘presidential palaces’ case. Hosni Mubarak is involved in the lawsuit for accusations of squandering public money allocated for renovating the presidential palaces. [Aswat Masriya, Ahram Online, Egypt Independent, EGYNews (Arabic), 4/16/2013]

IMF talks "haven’t failed" – presidency
Negotiations between Egypt and the International Monetary Fund have not failed, the president’s office said on Wednesday after an IMF delegation left Cairo without agreement on a $4.8 billion loan needed to ease a severe economic crisis. "Talk that the IMF talks failed is inaccurate as this delegation was technical and was not authorised to sign a deal with the Egyptian government and there were many positive results from the talks especially from the Egyptian government side," presidential spokesman Omar Amer told reporters. Egyptian ministers have said talks will continue when they visit Washington this week for the annual IMF/World Bank Spring meetings and the IMF staff mission may return to Cairo in May. [Reuters, 4/17/2013]

Islamists in Sinai claim Israel attack
Islamist militants in the Sinai Peninsula claimed responsibility for a rocket attack on the Israeli Red Sea resort of Eilat on Wednesday, and Egyptian security sources said the rockets had probably been fired from the Egyptian territory. In a statement posted on its website, the hardline militant group Magles Shoura al-Mujahddin said it had targeted Eilat with two Grad missiles on Wednesday morning, and then withdrew safely. Ahmed Ali, a military spokesperson for the Egyptian Ministry of Defense, denied that any evidence had been found to prove that the rockets had been fired from Sinai, but said that the ministry was cooperating with the Israeli Defense Ministry to investigate the matter. Egypt’s presidential spokesperson said that Israel may make declarations, but the president will not allow infringement on sovereign Egyptian territory. [Reuters, DNE, Ahram Online, EGYNews (Arabic), 4/17/2013]

Military finds car smuggling tunnel in Rafah
An unnamed source from the military reported Tuesday that border guards and an Armed Forces engineering division had found a large tunnel in North Sinai. According to the source, authorities suspect the tunnel in Rafah’s Barahma district is used for smuggling cars across the Egypt-Gaza border. The military is working to destroy the tunnel and find other illegal, underground routes using specialized equipment controlled by remote. [Egypt Independent, 4/16/2013]

Al-Azhar condemns Boston bombings, to launch new satellite channel
Al-Azhar, the country’s leading Islamic authority, denounced on Tuesday two explosions that rocked the iconic Boston Marathon a day before, killing three and injuring 144 others. The religious institution stressed that murdering innocents is a deplorable act that contradicts religious teachings, adding that Sharia law values protecting human life. The Grand Sheikh announced that al-Azhar, the highest seat of Sunni Islamic learning, will launch a new satellite channel soon. He explained that this step will be taken in order to create a platform for the correction of misconceptions and Fatwas (influential legal opinions that interpret Sharia) that are not in line with moderate Islam. [Egypt Independent, Aswat Masriya, 4/17/2013]

Turkey to give Egypt rest of $2 bln loan within 2 months – sources
Turkey will transfer the remaining $1 billion of a $2 billion budget support package agreed for Egypt last year within the next two months, Turkish economy officials and banking sources said on Wednesday. Under the Turkish agreement, announced last September during a visit to Ankara by Egyptian President Mohamed Mursi, Turkey’s Treasury loaned Egypt the first $1 billion. Turkey’s Eximbank will now supply the second tranche in the next two months, the sources said, although the interest rate on the loan had not yet been settled. [Reuters, 4/17/2013]