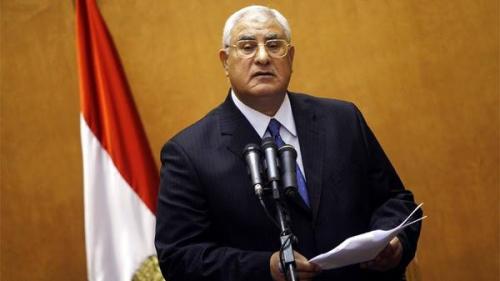 The presidency issued a decree on Wednesday outlining the criteria that will be used to select the fifty members of the committee charged with drawing up amendments to the 2012 constitution.
GOVERNMENT & OPPOSITION

Pro-Morsi coalition slams presidency’s statement
The National Coalition to Support Legitimacy slammed the Egyptian interim president’s statement and called for the ousted president’s return. The pro-Morsi Islamist alliance condemned the statement in which President Adly Mansour announced that diplomatic efforts to contain the crisis and deal with the sit-ins at Raba’a al-Adaweya and Nahda squares have ended in failure. The coalition explained it did not call for international intervention to solve the crisis and said it is only keen on retrieving “legitimacy” and having deposed President Mohamed Morsi return to power. [Aswat Masriya, 8/7/2013]

Cabinet to consider ‘next step’ after political impasse: Government source
After Egypt’s presidency announced the failure of mediation efforts to jumpstart reconciliation between the interim government and the Muslim Brotherhood, a government official toldAhram Online that preparations are underway for a cabinet meeting early Wednesday afternoon to consider possible outcomes of the failure. The government source said that the cabinet meeting would issue an appeal—the third in two weeks—for the Muslim Brotherhood to end their sit-ins which “have not met the standards of peaceful marches and sit-ins.” Meanwhile, the cabinet tasked Deputy Prime Minister and Minister of International Cooperation Ziad Bahaa-Eldin with reshaping the Supreme Council for Justice and Equality to tackle the flare up in sectarian violence. [Ahram Online, Ahram (Arabic), 8/8/2013]

Presidency outlines selection criteria for fifty member constitutional committee
The presidency issued a decree on Wednesday outlining the criteria that will be used to select the fifty members of the committee charged with drawing up amendments to the 2012 constitution. The committee is expected to begin work next month. The majority of its members will be drawn from state bodies and unions or bodies that are known not to be dominated by Islamist figures. The presidency has requested that these bodies nominate individuals for committee membership. The committee members will consist of the following: three from al-Azhar, three from the Orthodox Church, one from the police, one from the Armed Forces, four from the culture sector (e.g. Writers’ Union or the Supreme Council for Culture), four from the Labor Federation, four from trade unions, three from the chambers of commerce, industry and tourism, one from the Students’ Federation, one from the General Federation of Civil Society Organizations, five from national councils the most important of which are the Supreme Universities Council and the National Council for Human Rights, four from youth movements such as Tamarod and the January 25 youth movement (the body that will nominate them is not specified), two from Islamist parties, two from liberal parties, one from a leftist party and one from a nationalist party, along with ten public personalities chosen by the cabinet. [Ahram Online, DNE, Mada Masr, Egypt Independent, SIS, Ahram (Arabic), AMAY (Arabic), 8/7/2013]

Shater detained for inciting violence, Katatni released
The Egyptian prosecution ordered that charges of incitement of violence facing leader of the Freedom and Justice Party Saad al-Katatni be dropped. The charges relate to clashes at the presidential palace in December 2012. Katatni will not be released from imprisonment as he is facing a number of other charges, including incitement of violence during clashes between Morsi’s supporters and opponents in front of the Muslim Brotherhood’s Cairo headquarters in June. The prosecution also ordered the detention of the Brotherhood’s second-in-command, Khairat al-Shater, for fifteen days pending investigation on charges of inciting violence during the December clashes. Shater had already been detained without charge since his arrest on July 4. Meanwhile the families of ousted President Mohamed Morsi’s presidential team who have been detained in undisclosed locations since July 3 issued a statement Wednesday demanding their immediate release. [Ahram Online, Aswat Masriya, DNE, 8/7/2013]

Inflation climbs to 10.3 percent in July
Inflation ascended to 10.28 percent in July compared to 9.75 percent in June, the Central Agency for Public Mobilization and Statistics (CAPMAS) indicated in its latest report issued Wednesday. CAPMAS attributed the rise to increases in foodstuff prices. Interim prime minister Hazem El-Beblawi, had announced that several measures will be taken to reduce inflation. Measures announced by the Prime Minister and his deputy, Ziad Bahaa-Eldin, include the study of revitalization and development of agricultural production by granting debt exemptions to small farmers. [DNE, Egypt Independent, 8/8/2013]

Revolutionary forces call for August 16 rally against foreign intervention
Tamarod leaders, as well as other revolutionary forces, called for rallies on Thursday to show support for the government against “foreign intervention.” They called for protests throughout all of Egypt and the presidential palace in order to reject foreign intervention and ensure proper justice for ex-President Mohamed Morsi and Muslim Brotherhood leaders. The Tamarod campaign has also called for rallying on Thursday morning to perform the Eid prayers in Tahrir square and at the presidential palace in Cairo as well as in main squares in various governorates. [Ahram (Arabic), Mada Masr, Aswat Masriya, Egypt Independent, 8/8/2013]

Morsi supporters stage Eid protests, call for “victory” protest on Thursday
Supporters of ousted President Mohamed Morsi celebrated on Thursday the first day of Eid in their sit-ins which they have held for more than a month to demand the reinstatement of their elected leader. Former Minister of Religious Endowments Talaat Afifi led the Eid prayers at the Raba’a al-Adaweya protest where Morsi’s rarely-seen wife made a surprise appearance on stage at the main demonstration in Cairo to appeal for her husband’s return as the crowds roared “Returning! Returning!” She told his supporters that the president sends his regards, even though they have not seen or spoken to him. The demonstration is being held under the slogan”Eid of Victory.” [Aswat Masriya, Reuters, AP, Ahram (Arabic), 8/8/2013]

103 ‘terrorists’ arrested, sixty killed in Sinai security crackdown: Army statement
Army spokesman Ahmed Ali released a statement Wednesday with the results of the police and army’s crackdown on “terrorism and jihadists” in Sinai from the period July 5 to August 4. The statement, released on Ali’s official Facebook page, says that the crackdown resulted in apprehending 227 individuals—103 of which were arrested and 124 are either dead or injured. The 103 individuals arrested, from across Sinai, are currently being interrogated. From among the 124, sixty were killed in clashes between security forces, while sixty-four were injured. Meanwhile, two more soldiers were injured in an attack by unknown assailants on a security checkpoint in Arish in North Sinai on Wednesday, while security is on alert in the region.
[Ahram Online, Reuters, Aswat Masriya, Ahram (Arabic), Shorouk (Arabic), 8/7/2013]

Also of Interest:
164 prisoners pardoned on the occasion of Eid al-Fitr | Shorouk (Arabic), AMAY (Arabic)
Interior ministry intensifies security around Tahrir and public spaces during Eid | AMAY(Arabic)
Man arrested at pro-Morsi protest with torture images—official | Aswat Masriya
Death and injury of nine members of one family after dispute over a piece of land | Youm7(Arabic)

United States, European Union concerned at failure to break Egypt stalemate
The United States and the European Union said on Wednesday in a joint statement that they were concerned and troubled that Egypt’s parties had not found a way to break a dangerous stalemate in talks to defuse the political crisis. The Egyptian government bears a “special responsibility” to begin the process of reconciliation and ease of tensions in Egypt. The US Department of State in its press briefing said it does not think that dialogue in Egypt is over. The State Department expressed its hope that dialogue would continue in the coming days, but stated that the decision is ultimately up to the Egyptians. Ending Egypt’s political crisis will require compromise and there is still time for dialogue, the State Department said, as international envoys returned home and Egypt’s interim government said the talks had failed. Meanwhile, the US embassy in Cairo has warned its nationals of the possibility of clashes in Cairo near the two sit-ins being held by supporters of ousted President Mohamed Morsi. The United Kingdom has warned of more violence in Egypt after Eid if the authorities insisted on breaking up the sit-ins being held by supporters of Morsi. [Aswat Masriya, Reuters, DNE, SIS,Ahram Online, 8/8/2013]

Egypt rulers need to talk to Brotherhood: Dutch minister
Diplomatic mediation failed to break Egypt’s political deadlock because the country’s new rulers see no point in talking to the Muslim Brotherhood, but they will have to do so eventually, the visiting Dutch foreign minister said on Wednesday. Frans Timmermans was in Cairo for talks with the authorities and opposition parties on the day international efforts to facilitate a compromise collapsed. Egypt’s Foreign Minister Nabil Fahmy told Timmermans that all decisions in Egypt are made by the government and are not influenced by external source. Fahmy and Timmermans discussed a range of domestic issues in a meeting on Wednesday morning. Fahmy explained Egypt’s commitment to build real democracy through the ballot box, he added, stressing that Egypt would “progress in line with the rule of law without exceptions or the exclusion of any one person or party. [Reuters, DNE, Ahram (Arabic), 8/7/2013]