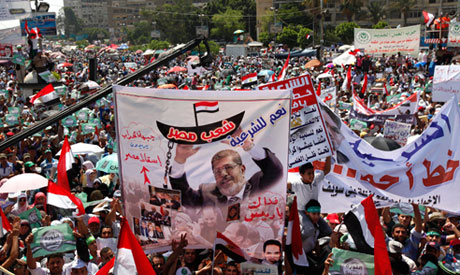 Egypt Islamists praise Morsi address, opposition decries it as ‘unrealistic’, rejects dialogue
President Mohamed Morsi’s speech Wednesday night marking the end of his first year in office met a warm reception by Egyptian Islamist parties and politicians but was panned by most opposition figures and groups. Nader Omran, spokesman for the Muslim Brotherhood’s Freedom and Justice Party (FJP), described the address as "excellent, balanced and badly-needed," in light of Egypt’s current political impasse. He added, "We’re gathering on Friday to send this message: protest all you want in a peaceful way, gather if you want to convince people that the president hasn’t done enough, or hasn’t done anything at all, but step over legitimacy and that is really a red line." The Strong Egypt Party slammed the speech, accusing Morsi of using the same wording that ousted president Hosni Mubarak had often used. Morsi, he said, appeared to be speaking "about another Egypt, one that does not exist in the real world." Egypt’s main opposition coalition Thursday rejected an offer from Morsi for dialogue, repeating its call for early presidential elections and calling for peaceful demonstrations on June 30. A National Salvation Front (NSF) statement said Morsi’s speech entrenches the Egyptians’ belief that he is incapable of assuming power and is unfit for such position. Several opposition forces, among them April 6 Youth Movement, the Revolutionary Socialists, and the Strong Egypt Party, also released a statement on Thursday asserting that they would not accept the return of former Mubarak-era officials to power as an alternative to President Morsi and his regime. Meanwhile, Amr Moussa called on Morsi to accept the demand for early presidential elections. [DNE, Ahram Online, Aswat Masriya, EGYNews (Arabic), 6/27/2013]

Eleven Islamist parties launch ‘Legitimacy Support’ alliance
Eleven Islamist political parties launched the ‘National Alliance for Legitimacy Support’ on Thursday to "protect the Egyptian people’s democratic gains."  The announcement comes one day before mass rallies planned in Cairo to support President Mohamed Morsi’s rule.
The alliance—which was officially announced in a press conference at Cairo’s International Conference Centre—includes the Freedom and Justice Party (FJP), the centrist al-Wasat Party, the Salafist al-Watan Party, and the Building and Development Party of the ultra-conservative al-Jama’a al-Islamiya group. The FJP, one of the members of the coalition, released the launching statement, which detailed the objectives of the new-founded coalition under the slogan “protecting the revolution… protecting legitimacy”. [Ahram Online, DNE, 6/28/2013]

Egypt’s top prosecutor reminds citizens of their right to arrest ‘vandals’
Egypt’s prosecutor-general released a statement reminding citizens of their legal right to arrest anyone who vandalizes public property. In a Thursday statement, the prosecutor-general stressed its support for peaceful protests while simultaneously asserting that some acts were "criminal" and therefore "punishable by law." The statement went on to remind citizens that they had the legal right to arrest perpetrators of any of the above-mentioned acts. The statement, published by state-run Ahram, warned that any assault on a member of the armed forces or police who are tasked with securing public and private property would be met with decisive procedures. [Ahram Online, DNE, 6/27/2013]

Alex judges reject Morsi speech, call for minister’s resignation
Alexandria judges reject President Mohamed Morsi’s speech and demand for the Minister of Justice’s resignation. The judges had met in an emergency meeting to discuss the implications of the speech where they announced their rejection of the speech. Tanta judges additionally called on the Minister of Justice to reject the speech saying that some of the statements in the speech is in violation of article 168 of the constitution and can be considered an assault on the judiciary’s independence and authority. [AMAY (Arabic), EGYNews (Arabic), 6/28/2013]

Egypt protests could heap pressure on beleaguered currency
Egypt’s central bank faces an uphill task keeping the country’s currency stable if mass anti-government protests planned over the coming days turn violent or drag on for too long. A round of violent protests in December triggered a run on the Egyptian pound that cost the government over $2 billion to bring under control and caused it to abandon its policy of a freely convertible currency. To obtain foreign currency, many private importers now turn to the black market, where the pound has weakened by almost 20 percent against the dollar since the end of December. A dollar now costs 7.70 pounds on the black market and about 7.00 pounds on the tightly controlled interbank market, compared to 6.18 at the end of December. This has pushed up the price of imports, helping to boost consumer inflation to an annual 8.2 percent in May from 4.7 percent in December. [Reuters, 6/27/2013]

Death toll in clashes around Egypt rises
As clashes continue around Egypt, the death toll has risen. The health ministry announced three deaths after the continued clashes in the Delta and around 434 injured. A member of Egypt’s ruling Muslim Brotherhood was shot dead in an attack on the group’s office in the Nile Delta town of Zagazig, Sharqiya, on Thursday, a day before the start of a wave of opposition protests. The news was carried by the official website of the Brotherhood’s Freedom and Justice Party, which blamed an opposition youth group and people loyal to ousted president Hosni Mubarak for the attack. Additionally, with continued fuel shortages and long waits in line, an angry motorist set fire to a fuel station in Kafr al-Sheikh city Thursday, after waiting in a queue for diesel fuel that extended several kilometers. The ministry of health announced it will deploy 1,979 ambulances in various Egyptian governorates and rallying areas. [Aswat Masriya, Reuters, 6/28/2013]

Battle intensifies between Egyptian state and broadcasters
The owner of an Egyptian TV channel that satirizes Islamist president Mohamed Morsi was banned from leaving the country on Thursday, hours after Morsi attacked him by name, authorities shut down another channel and a state TV anchor resigned on air. The official MENA news agency reported that CBC owner Mohammed al-Amin was facing charges of tax evasion, and that the public prosecutor had decided to ban him from leaving the country. "This is dictatorship," a lawyer for business tycoon Mohamed al-Amin told Reuters. Amin’s CBC channel has had legal run-ins before over its ridicule of President Morsi on a hit satirical program modeled on American comic Jon Stewart’s "Daily Show." Al-Faraeen channel was abruptly shut down Thursday night in the midst of a live program hosted by the channel’s owner Tawfiq Okasha. Meanwhile, state TV anchor Gamal al-Shaer resigned dramatically on air in protest at what he said were attempts by Information Minister Salah Abdel Maqsoud, of the Brotherhood, to control the program’s guests and subjects. [Reuters, Ahram Online, 6/27/2013]

Islamist forces join together for Rabaa al-Adaweya protest
Thousands of backers of Egypt’s Islamist president rallied Friday in Cairo in a show of support ahead of planned opposition protests this weekend demanding his removal, as passengers swamped the capital’s international airport to leave, fearing widespread violence. Many Brotherhood supporters were bussed in to the densely-populated Cairo suburb since early morning from other cities and Cairo districts under the slogan “Legitimacy is a Red Line.” While chanting pro-Morsi slogans, the demonstrators called for standing up to "the attempts of the former regime remnants to ignite strife in the country." They are expected to hold an open-ended sit-in. [AP, Aswat Masriya, Egypt Independent, 6/28/2013]

Thousands rally against Morsi across Egypt
Thousands of protesters demonstrated in Alexandria after Friday prayers, part of a nationwide wave of rallies calling for President Mohamed Morsi’s resignation, with clashes breaking out between a number of Muslim Brotherhood supporters and protesters in Sidi Gaber. In Tanta, around 30,000 protesters staged marches and gathered on al-Shohadaa Square demanding Morsi’s departure. In Kafr al-Zayyat, approximately 20,000 protesters gathered on al-Sa’a Square with banners calling for Morsi to leave, while thousands took part in a march in Zagazig, Sharqiya. In Cairo, protesters flocked to Tahrir Square and the presidential palace on Friday morning to demonstrate against Morsi and the Muslim Brotherhood. The demonstrators set up a total of eight tents in the area surrounding the palace, the Middle East News Agency (MENA) correspondent reported. Dozens of youths staged a demonstration at Mostafa Mahmoud Mosque in Cairo on Friday to call for ousting Morsi. Scores of protesters joined the demonstration which will then head to Tahrir Square. Meanwhile, protesters in Tahrir Square sealed off all streets leading to the square to stop vehicles from passing through on Friday. Young volunteers will secure entrances to protest and sit-in sites ahead of this weekend’s planned demonstrations, Tamarod spokesperson Hassan Shaheen said. Groups of volunteers will inspect the IDs of participants entering protest sites, he added.
[Egypt Independent, Aswat Masriya, Reuters, 6/28/2013]

Egypt clerics warn of "civil war", urge calm
Egypt’s leading religious authority warned of "civil war" on Friday and called for calm after a member of the ruling Muslim Brotherhood was killed ahead of mass rallies aimed at forcing the president to quit. "Vigilance is required to ensure we do not slide into civil war," the al-Azhar clerical institution said in a statement reported by state media. It blamed "criminal gangs" who attacked mosques for street violence. Clashes linked to the political tensions have killed five and wounded scores in recent days. [Reuters, SIS, 6/28/2013]

Egypt: amid mounting tensions, Ban encourages peaceful dialogue, non-violence
With many “strong and opposing opinions” being expressed in Egypt, Secretary-General Ban Ki-moon has stressed the right of the people to demonstrate peacefully and called on all parties in the country “to respect this right and to uphold the law.” “[The Secretary-General] strongly encourages Egyptians to remain committed to the universal principles of peaceful dialogue and non-violence,” the UN chief said in a statement issued yesterday evening by a spokesperson in New York. [UN News Centre, 6/28/2013]