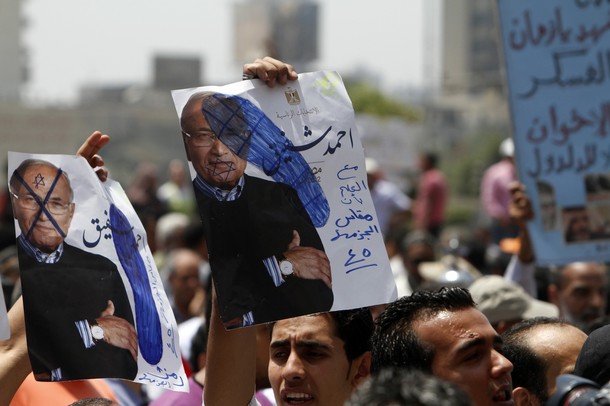 Tens of thousands of protesters have begun filtering into Tahrir Square to participate in the "Disenfranchisement Friday," protests to demand that presidential candidate Ahmed Shafiq be barred from running for the country’s highest office.

Tens of thousands of protesters have begun filtering into Tahrir Square to participate in the "Disenfranchisement Friday," protests to demand that presidential candidate Ahmed Shafiq be barred from running for the country’s highest office. The protesters also held banners with "save the revolution" and "Minister of justice: Where is the Disenfranchisement Law?" scrawled on them. Some demonstrators also expressed their displeasure with the Muslim Brotherhood’s Mohamed Mursi who has made it, ahead of Shafiq, to the second and final round of elections. Several political groups including the Revolution Youth Union, Kefaya and April 6 youth movement have called for nationwide protests on Friday to demand the Disenfranchisement Law which was passed by parliament in April be applied to Shafiq thus excluding him from the presidential race.

Muslim Brotherhood spokesperson Mahmoud Ghozlan denounced political forces who have asked presidential candidate Mohamed Morsy to make certain promises or sign statements in exchange for their support. Speaking to the London-based Al-Sharq Al-Awsat newspaper, Ghozlan described making demands of Morsy in exchange for support as “extortion.” “We offered the utmost we have,” Ghozlan said. He rejected signing any statements laying out conditions, adding that the pledges Morsy has made are enough.

Where did the votes of Salafis go?

Almost three weeks before the presidential poll kicked off, the Salafi Dawah and its political arm the Nour Party had announced their endorsement of Abdel Moneim Abouel Fotouh. Yet, in the actual vote Abouel Fotouh came in fourth in the first round of the presidential election held last week, garnering a little less than 20 percent of more than 23 million valid votes. Accusations were leveled against Salafis that they had betrayed their candidate and did not campaign well enough for him on the ground in a way that would have at least qualified him for the run-off. In a phone interview, Nour spokesperson Nader Bakkar admitted that promoting Abouel Fotouh among the party’s rank and file was not an easy endeavor for several reasons. Bakkar believes that many Salafis ended up not participating in the poll.

This week, Parliament released a report on Wednesday outlining their achievements after 120 days in office, just around a month after it released a 100-day report. On the front page of the FJP daily, a catalogue of Parliament’s achievements takes up a quarter of a page and is subtly placed under the paper’s main headline, which also happens to be Morsy’s campaign slogan, “Our strength is in our solidarity.” The achievements as presented by Parliament Speaker Saad al-Katatny include passing nine new laws, handing in over 8,000 requests for information from the government and raising the pensions granted for the families of martyrs from the 25 January revolution, as well as including some state-sponsored health benefits for single mothers.

Mubarak trial bounces between the legal and the political

Judge Ahmed Refaat is scheduled to announce his verdict in the trial of fallen President Hosni Mubarak, his two sons and senior officials on charges of killing protesters and financial corruption. Timed between the unrest created by the unexpected results of the first round of the election and the runoff that would determine Egypt’s next president, Refaat is put in a difficult position in which a decision that he has vowed to make on a strictly legal basis with no regard for public pressure has crucial political implications. Sherif Younes, professor of history at Helwan University and writer, sees the Mubarak trial as the traditional authority having to prosecute Mubarak under public pressure, and doing so under the very legal system that was inherited from Mubarak. In other words, no revolutionary courts or special laws are governing the case. So while the case is following a legal course, it’s also mutated by political pressure.

Egypt has struggled to obtain bank payments for its fuel purchases, trade sources said, delaying diesel supplies for transport, industry and agriculture ahead of the second round of an election vote. The payment problems have caused shipping delays and prompted some suppliers to think again before offering oil into a forthcoming $1 billion import tender, half a dozen trade sources, including current suppliers, told Reuters. They said delays of up to two weeks in deliveries were a regular occurrence ahead of peak summer demand for diesel, blaming Egypt’s difficulties in obtaining letters of credit from banks. An official at the Egyptian General Petroleum Corp (EGPC) denied this. A trader involved in the transactions said banks were increasingly nervous with loans and required additional assurances as Egypt’s stretched finances made it harder to pay for its heavy fuel subsidies bill.

A Coptic Bishop in Egypt infuriated many Christian women in the country after saying on May 18 that they should dress more modestly, “like their Muslim sisters” and follow their example, the Guardian reported earlier this week. “Our Lady Mariam [referring to St. Mary] used to wear a tarha [long scarf covering the hair], why can’t you follow her example and cover up?” the bishop, who is one of the nominees for the papal seat of the Coptic Orthodox Church, recently said. The comments were seemingly made in light of the fact that a vast majority of Muslim women in Egypt are now veiled, while Coptic women have recently said they are increasingly being insulted in society for not covering their hair, as per typical Muslim practice.

Egypt-US ties will be cooler whoever wins in Egypt: Analysts

US President Barack Obama’s administration has been careful to avoid any sign it backs either Ahmed Shafiq, the ousted Mubarak’s last prime minister, or Mohamed Mursi, the Muslim Brotherhood’s candidate. Nathan Brown, a Middle East expert at The George Washington University, told AFP he did not believe Obama administration officials necessarily backed the secular Shafiq. Shafiq will not "be quite as cooperative with the United States as Mubarak was because domestically he would be far, far weaker." Shafiq may also be a reluctant partner because he might feel Washington had betrayed the Mubarak regime. In Washington, both Mursi and Shafiq "set off almost mirror-image anxieties, one about the result for Egypt and the other about the fate of American-Egyptian relations," Brown said.