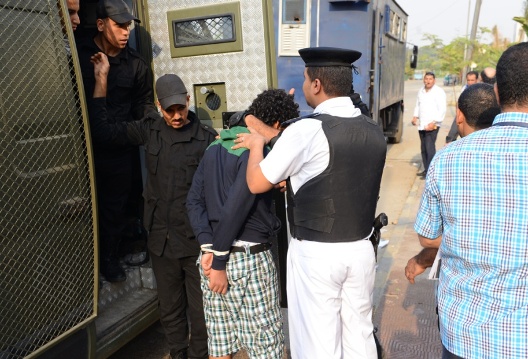 Hassan Eissa, head of Ain Shams University, announced Wednesday that a protocol is expected to be signed Thursday between the Ministry of Interior and the Supreme Council of Universities (SCU) to tighten campus security nationwide. While Helwan University is the latest to witness pro-Brotherhood and pro-military demonstrations on Thursday, head of ambulance authority Ahmed al-Ansary announced that twenty-six were injured in clashes that place on Wednesday among students in several governorates, at universities in Zagazig, Mansoura, and Alexandria.

Egypt accuses Brotherhood of rejecting reconciliation
“The government realizes from its side the importance of reconciliation,” said Deputy Prime Minister Ziad Bahaa-Eldin in a statement. “Those who are until now rejecting or stalling any understandings aimed at achieving reconciliation and stability for the Egyptian people are the leaders of the Muslim Brotherhood.” Bahaa-Eldin has tried to find a way out of Egypt’s political crisis since he put a proposal to the cabinet in August that called for an immediate end to the state of emergency, political participation for all parties and guarantees of human rights, including free assembly. [Reuters, 10/30/2013]

Fifty-member committee approves press freedoms articles
As the process of voting on the new constitution articles continues, the fifty-member committee approved articles related to press freedoms. Meanwhile, the Nour Party denied that would not quit the committee under any circumstances. Salah Abdel Maaboud, the party’s reserve member in the committee, told private channel Al Hayat that they will wait until voting on the articles ends and then declare its position. “We’ll wait and see if our recommendations will be considered or not, as the Supreme Constitutional Court has not come up with a definition for the principles of Islamic Sharia,” he said. Meanwhile, journalist Mahmoud Nafady, head of the parliamentary reporters division, filed a lawsuit at the State Council against the committee’s decision to vote on the constitutional articles behind closed doors. Nafady said on Wednesday that after Amr Moussa was elected as head of the committee, he vowed that the work of the committee be known and monitored by the public. [EGYNews (Arabic), Mada Masr, Egypt Independent, 10/31/2013]

Egypt military court orders journalist imprisoned
An Egyptian newspaper says one of its journalists has been sentenced to a year in prison by a military tribunal for allegedly impersonating an army officer. The private daily newspaper Al-Watan published a story on its website Wednesday saying Hatem Aboul-Nour was imprisoned on Tuesday after the Northern Cairo Military Tribunal issued its verdict. Aboul-Nour had been detained for two months prior to his sentencing. Al-Watan criticized the decision, asserting that the constitution that is currently being revised bars the detention of journalists. [AP, Ahram Online, 10/30/2013]

Morsi will defend himself at court: Journalists Syndicate vice-chief
Ousted president Mohamed Morsi plans to represent himself in court, according to Journalists Syndicate deputy chief Mohamed al-Damaty. Speaking during a press conference at the Amal Party headquarters on Thursday, Damaty announced Morsi would reject lawyers assigned to him in order to defend himself in court. Damaty added lawyers would attend Morsi’s trial to defend legitimacy, not Morsi. Mohamed al-Sisi, a member of the Muslim Brotherhood’s legal committee said that the lawyers, who are also part of the Brotherhood’s legal committee, will have trouble appearing in court because most of them have charges filed against them. [Egypt Independent, Cairo Post, 10/31/2010]

Protests and arrests continue across Egypt’s university campuses
Hassan Eissa, head of Ain Shams University, announced Wednesday that a protocol is expected to be signed Thursday between the Ministry of Interior and the Supreme Council of Universities (SCU) to tighten campus security nationwide. According to Eissa, the SCU has authorized the secretary general of the council and the minister of higher education to sign the security protocol between the interior ministry, universities and the SCU. However, Higher Education Minister Hossam Eissa has said he does want to see the return of security forces on Egyptian university campuses. While Helwan University is the latest to witness pro-Brotherhood and pro-military demonstrations on Thursday, head of ambulance authority Ahmed al-Ansary announced that twenty-six were injured in clashes that place on Wednesday among students in several governorates, at universities in Zagazig, Mansoura, and Alexandria. Meanwhile, Sobhi Ghoneim, president of Menoufiya University, said that sixteen professors will be referred to investigations for demonstrating outside the university and breaking into his office Wednesday. According to Refaat al-Baddi, media adviser to Ghoneim, the professors demonstrated in front of the office of university’s president, holding signs against the army and the state. Vice Dean for Graduate Studies at the Faculty of Education at Alexandria University, Mahmoud al-Ebiary, who is considered a leading figure of the Muslim Brotherhood, was also arrested on Thursday. Alexandria prosecution issued a warrant for his arrest on charges of inciting violence.[Ahram Online, Egypt Independent, Cairo Post, 10/31/2013]

IMF in Egypt for first time since June 30
In its first visit to Egypt since June 30 uprising, an International Monetary Fund (IMF) delegation met with Finance Minister Ahmed Galal Wednesday evening, Al-Ahram reported. Galal was keen to continue discussions with the global lender over providing Egypt with the technical support to introduce the new Value-Added Tax (VAT), steering clear of ongoing negotiations over the IMF’s $4.8 billion loan. The visit comes just a few days after the Central Bank governor Hisham Ramez was quoted as saying a senior IMF official had behaved in a “totally unacceptable way.” [Ahram Online, EGYNews (Arabic), Reuters, 10/31/2013]

Religious Endowment Minister dissolves mosques’ boards of directors
Minister of Religious Endowments Mohamed Mokhtar Gomaa dissolved all boards of directors of mosques “that were formed during former regimes” on Wednesday all over the country, and has set a youth quota for the new boards. Gomaa asked undersecretary for mosques affairs Mohamed Abdel Razek to address all governorates with new regulations to choose new boards of directors within three days. Mokhtar ordered his aides to implement new selection criteria for the boards, stipulating that within the next two months two thirds of each board’s members should be young people. The ministry has already revoked the licenses of 55,000 imams and banned Friday sermons in mosques smaller than eighty meters. [SIS, Mada Masr, 10/31/2013]

Egyptian Islamists call for daily protests before Morsi trial
Supporters of Egypt’s ousted Islamist President Mohamed Morsi called on Thursday for daily protests in the four days before his trial on November 4, raising the danger of more violence in a crisis that has already cost hundreds of lives. The trial could further inflame tensions between the Brotherhood and the army-backed interim government. “The Alliance calls on all proud, free Egyptians to gather in the squares in protest against these trials… starting on Friday,” the Brotherhood and its allies said in a statement. It urged crowds to move on Monday to a police institute near Cairo’s Tora prison, where the trial is expected to take place. The charges relate to the deaths of about a dozen people in clashes outside the presidential palace in December after Morsi enraged his opponents with a decree expanding his powers.[Reuters, AP, 10/31/2013]

Security operations continue in Sinai
Security forces arrested a group of militants in northern Sinai, as well as destroy a number of tunnels and cars that are being used by the militants, a security source told Al-Masry al-Youm. The source added that second field army arrested the alleged relations coordinator between Hamas and militants in Sinai.  Meanwhile, A soldier was attacked in a drive-by shooting by unknown assailants on Wednesday. Conscript Ali Ali Hassan, 22, who was guarding a security building in Arish, was injured in the chest according to security sources. [Shorouk (Arabic), AMAY (Arabic),  Ahram Gate  (Arabic), Tahrir (Arabic), SIS, 10/31/2013]

United States calls on Egypt to end political detentions; US defense secretary talks with Sisi
Violence impedes the democratic process in Egypt, the US State Department said on Thursday on its official Arabic Twitter page. The US government added, “Violence also impedes the Egyptians’ ability to develop and achieve economic recovery.” Urging Egypt to end all political detentions, the US State Department followed up with another tweet saying, “We consistently called for an end to all political detentions and we will continue to do so.” Meanwhile, US Defense Secretary Chuck Hagel has discussed political and security concerns in Egypt via phone with his Egyptian counterpart Abdel-Fattah al-Sisi. “Secretary Hagel and Egyptian Minister of Defense Gen. al-Sisi spoke again by phone this morning. They discussed the interim government’s progress along the political roadmap, lifting of the curfew and state of emergency, and the security situation in the Sinai and the Suez Canal,” Pentagon press secretary George Little said in a press statement on Wednesday. [Aswat Masriya, Ahram Online, Cairo Post, EGYNews (Arabic), Shorouk (Arabic), Tahrir (Arabic), SIS, 10/31/2013]

Hamas denies interior minister’s claim that the Brotherhood’s deputy Supreme Guide is hiding out in Gaza
Interior Minister Mohamed Ibrahim has claimed Mahmoud Ezzat, deputy Supreme Guide of the Muslim Brotherhood, is currently hiding out in the Gaza Strip. Youssef Rizqa, presidential adviser in the Gaza Strip’s Hamas government, has denied the claim saying, “There are no Brotherhood leaders here,” Rizqa told the Turkish Anadolu news agency on Thursday. “This is nothing but media speculation.” He claimed Egypt was instead attempting to justify tightening up border controls on the Gaza Strip, as well as its closure of the Rafah crossing and destruction of tunnels. [Egypt Independent, 10/31/2013]