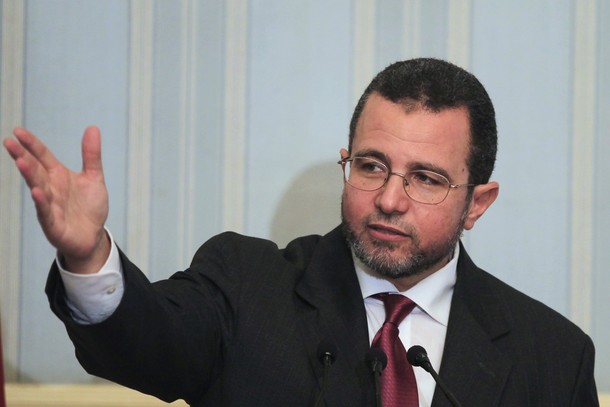 At a press conference held by Hisham Qandil on Thursday, the prime minister announced that the new government, expected to be sworn in within hours, will be formed by 35 ministries. Qandil also confirmed that the head of the military council, Field Marshal Hussein Tantawi, will retain his position as defence minister, a post he has held since 1991.

[Ahram Online, 8/2/2012] President Mohamed Morsi has appointed former Prime Minister Kamal El-Ganzouri as advisor for him, according to Egypt’s state television. El-Ganzouri was appointed prime minister by the military council in December 2011, and his government has been functioning in a caretaker role since Morsi’s inauguration on 30 June. An economist, he also served as premier in government during Mubarak’s presidency.

[Ahram Online, Al Shorouk (Arabic), 8/2/2012] At a press conference held by Hisham Qandil on Thursday, the prime minister announced that the new government, expected to be sworn in within hours, will be formed by 35 ministries. Qandil also confirmed that the head of the military council, Field Marshal Hussein Tantawi, will retain his position as defence minister, a post he has held since 1991. This puts to rest circulating rumours that Tantawi would take the role of vice-president. The post of deputy prime minister for economic affairs will not be occupied, Qandil said, because of a failure to find consensus around one figure who can coordinate amongst different policy makers. Al Ahram has posted the final list of names (in Arabic) here.

[Reuters, EGYNews (Arabic), 8/2/2012] Egyptian former appeal court judge Ahmed Mekky said he has accepted the post of justice minister in the government of newly elected President Mohamed Mursi, and is to be sworn in with other cabinet officers on Thursday. Although the judiciary, like most government offices during the Mubarak-era, was considered corrupt, many judges, including Mekky, gained public respect for supporting verdicts that were not in the interests of Mubarak’s ruling elite. Mekky had been among a group of judges who were vocal about cases of vote rigging, which had helped to keep Mubarak and his political supporters in power for 30 years.

[Egypt Independent, 8/1/2012] The Salafi-oriented Nour Party said it had rejected an appointment in President Mohamed Morsy’s new government. A party leader, who requested anonymity, said that Prime Minister-designate Hesham Qandil telephoned party member Khaled Allam Al-Deen Wednesday to offer him the environment minister post. The party rejected the offer, saying it was an insult from the prime minister. The anonymous party source said Nour would hold a press conference Friday to explain its boycott of the new government. Morsy had promised the party three ministries in the upcoming cabinet, in addition to the position of vice president, the source claimed, but all those promises evaporated when Qandil was appointed prime minister.

[Egypt Independent, 8/1/2012] President Mohamed Morsy said Wednesday that he is considering appointing an adviser to represent Egyptian expatriates. He said during his daily Ramadan radio segment that he cares about the dignity of the Egyptian people, adding that maintaining “the dignity of Egyptians inside or outside Egypt” is one of his main responsibilities. Official statistics show that there are 8 million Egyptian expatriates. More than half of them live and work in the Gulf region. In recent years, expatriates, especially workers in the Gulf, have been complaining of mistreatment by foreign authorities.

[Reuters, 8/2/2012] Egypt’s new Prime Minister Hisham Kandil will hold a meeting with members of his government on Saturday to discuss the next steps on seeking an International Monetary Fund loan, Kandil said. An IMF deal would help Egypt stave off a budget and balance of payments crisis and add credibility to economic reforms needed to restore the confidence of investors who fled the country after a popular uprising last year.

[Egypt Independent, 8/1/2012] The World Bank has agreed to give Egypt a loan of US$200 million to fund the upgrade of sanitation and sewage infrastructure in four governorates in the Nile Delta and Upper Egypt, an official said on Wednesday. Fayza Abouelnaga, Minister of Planning and International Cooperation, was quoted by state TV as saying that the project which will be funded by the loan aims at creating work opportunities for skilled and non-skilled workers. The loan came under heavy fire when Egypt’s then-ruling military council accepted it but some Salafi MPs criticized it, saying the interest rate was against Sharia.