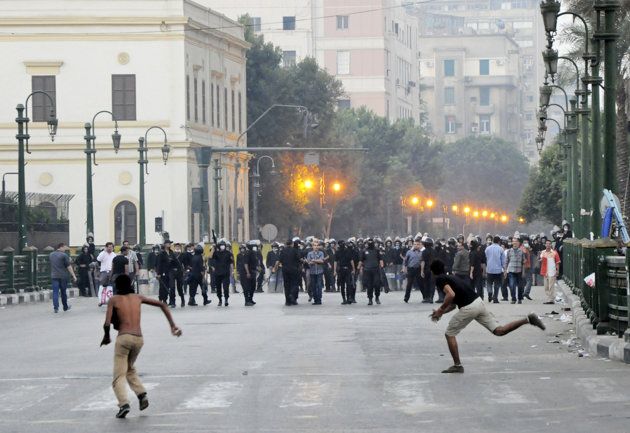 A controversial draft bill, named the ‘protecting society from dangerous people’ bill, replicates the worst features of the widely-misused and now defunct emergency law, according to a statement issued by the Egyptian Organization for Human Rights (EOHR).

Al-Nour conflict over elections
In a rift between its reformist and conservative wings, members of the Al-Nour party in different governorates are calling for protests to advocate the decision taken by Emad Abd Al-Ghafour, party chairman, to postpone internal elections. Al-Ghafour wants to postpone until after legislative elections following complaints in the run up to the polls about the Membership Affairs Committee responsible for running elections. Al-Nour’s Supreme Committee however, wants to hold elections on time. [Daily News Egypt, Shorouk (Arabic), 9/18/2012]

Rights group: New police powers law recreates Mubarak-era emergency regime
A controversial draft bill, named the ‘protecting society from dangerous people’ bill, replicates the worst features of the widely-misused and now defunct emergency law, according to a statement issued by the Egyptian Organization for Human Rights (EOHR). The bill, which was prepared by the interior and justice ministries and introduced by the incumbent cabinet led by premier Hisham Qandil, is yet to be approved by President Mohamed Morsi. [Ahram Online, 9/18/2012]

Constituent Assembly rights committee amends clauses on belief, press
The Constituent Assembly’s Freedom and Rights Committee changed the language in the articles dealing with freedom of belief, human trafficking and the press on Tuesday, sources said. The Salafi Nour Party agreed with Judges Club head Ahmed al-Zend to mount pressure on the assembly regarding articles related to judicial authority. Al-Azhar representative Hussein al-Shafei said Sharia should be the main source of legislation in the new constitution but that the Supreme Court remain the final arbiter. [Egypt Independent, Shorouk (Arabic), 9/19/2012]

Radical camps detected in Sinai, security source says
Extensive activity by radical groups has been detected in North Sinai as part of a military operation seeking to clear extremist havens in the region, a security source said. The security official, who asked not to be named, said the locations of the camps have been identified and the information obtained by security has been submitted to “political leadership.” He said officials will increase the number of intelligence operatives in the area to help arrest armed suspects. [Egypt Independent, 9/19/2012]

Militants call army raid ‘barbaric’
Islamic militants in Egypt’s northern Sinai Peninsula have accused the army of acting in a "barbaric, inhumane way" during a raid this week that turned deadly in a local village. In a new statement, the Salafi Jihad in Sinai said it fought back when troops raided the village last Sunday. It accused forces of shooting at civilians. [AP, 9/19/2012]

Govt proposes solution to Nile University conflict as students continue protest
Minister of Higher Education Mostafa al-Sayed Mossad said Tuesday that a proposed solution to the conflict between Nile University and Zewail City of Science and Technology includes granting the university new buildings. Since late August, Nile University students have been protesting the public prosecutor’s decision to hand the campus over to Nobel Laureate Ahmed Zewail. One of the protesting students, said that they won’t end their demonstration until their facilities and buildings are returned to the university. Spokesperson for the “Liberal Current” in Alexandria warned Morsi against a return to Mubarak-style rule, referring to forcibly quashing protests. [Egypt Independent, Shorouk (Arabic), 9/19/2012]

Doctors join teachers and transport workers on strike
Teachers and administrative staff of Cairo University have been on strike since last week demanding an increase in minimum wages, transport workers escalated their strike on Monday after their union representative was arrested and now Doctor Mostafa Al-Behairy has resumed the sit-in and hunger strike he started Saturday at the doctors’ syndicate in Cairo, demanding better working conditions for medical staff. A member of the board of the Doctor’s Syndicate Ahmed Hussein has started a hunger strike as well. Prime Minister Hisham Qandil said, however, that the protesters make up no more than 5% of the workforce. [Daily News Egypt, Youm 7 (Arabic), al-Watan (Arabic), 9/19/2012]

US denies protests stalling aid to Egypt
US officials Tuesday denied that protests in Cairo over an anti-Islam Internet video have stalled talks on relieving $1 billion worth of Egypt’s debt to the United States. State Department spokeswoman Victoria Nuland said a report in the Washington Post that talks on wiping out the debt had been delayed was "wrong." "We are working with the Congress now on how we will move forward on this. We’ve made an initial budget request," she told reporters. [Ahram Online, 9/19/2012]

Muslims decry French Mohammad cartoons as new insult
Muslim leaders criticised a French magazine’s publication of cartoons of the Prophet Mohammad on Wednesday as another Western insult to their faith and urged France’s government to take firm action against it. Mahmoud Ghozlan, spokesman for the Muslim Brotherhood, welcomed French government criticism of the cartoons but said that French law should deal with insults against Islam in the same way as it deals with Holocaust denial. [Reuters, Ahram (Arabic), 9/19/2012]

Amending treaty with Israel ‘a matter of time,’ says presidential adviser
An adviser to President Mohamed Morsy has said that amending the 1979 peace treaty signed with Israel is "a matter of time," adding that such a move is necessary to restore full Egyptian control over Sinai. Mohamed Essmat Seif al-Dawla, who has been publicly advocating the move, told Kuwaiti newspaper Al-Jareeda in an interview published on Wednesday, "There is no reason for keeping a treaty unchanged for three decades." [Egypt Independent, al-Jazeera (Arabic), 9/19/2012]