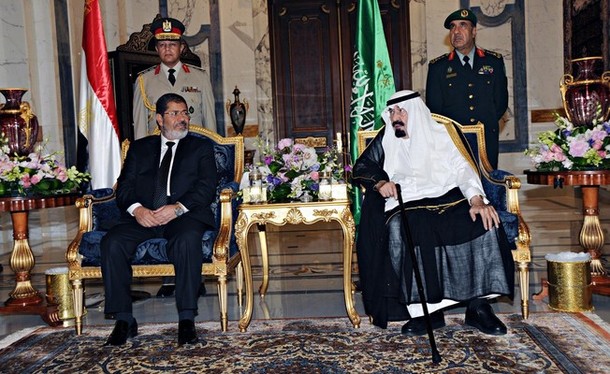 The Supreme Council of Armed Forces will dictate all laws in regards to the military in the new constitution, further leaving matters of the military outside of civilian control, according to the outcome of the System of Governance Committee of the Constituent Assembly meeting on Monday.

SCAF to keep civilians away from military matters in Constitution

[Daily News Egypt, 7/12/2012] The Supreme Council of Armed Forces will dictate all laws in regards to the military in the new constitution, further leaving matters of the military outside of civilian control, according to the outcome of the System of Governance Committee of the Constituent Assembly meeting on Monday. Members discussed articles and clauses relating to the military and its leadership. The committee addressed the possibility of ensuring the independence of the Armed Forces institution. Essam El-Erian, the Deputy and Acting Chairman of the Muslim Brotherhood’s political wing, the Freedom and Justice Party, argued against the proposition and said it would lead to Egypt having “two legislators” in reference to parliament and the military.

In constitution debate, Al-Azhar gets high praise from church leaders

[Egypt Independent, 7/11/2012] After days of heated deliberations in political and religious circles, the architects of Egypt’s next constitution reached an agreement on Tuesday on the phrasing of the document’s most contentious article — the one that defines the role of Islamic law in the political order. The Constituent Assembly’s subsidiary committee, tasked with drafting the first chapter of the constitution, agreed unanimously to adopt the phrasing of the previous constitution, which states that “the principles of Islamic Sharia are the primary source of legislation.” Despite their failure to introduce that modification, Salafis see a victory in adding a clause granting Al-Azhar, rather than the Supreme Constitutional Court, the right to decide what falls within the parameters of Sharia’s principles.

In battle over Sharia, Salafis lay groundwork for the future.

[Egypt Independent, 7/12/2012] Coptic Orthodox Church representatives serving on the Constituent Assembly have welcomed a proposal that would enshrine Islam as the state religion but also protect the right of Christians and Jews to follow their religious codes. The assembly tasked with drafting the new charter is considering adding a line that reads, "Christians and Jews shall resort to legislation derived from their own religions." Evangelical leader Safwat al-Bayady expressed hope that the proposal would be accepted by the required majority in the assembly. But Haytham Kameel, a Copts without Restrictions leader, said the movement is waiting for the resolution of legal challenges to the Constituent Assembly.

[Ahram Online, 7/11/2012] Opposition figure and head of the newly-formed Constitution Party Mohamed ElBaradei called for President Mohamed Morsi, the Supreme Council of the Armed Forces (SCAF), "civil forces" and the judiciary to agree on a new addendum to the interim Constitutional Declaration via his Twitter account, Wednesday. The celebrated reform campaigner outlined four key features that should be included in the proposed addendum, including: a new constituent assembly be formed to draft a "democratic constitution that guarantees rights and freedoms"; transferring the legislative authority to the Constituent Assembly; agreement on the formation of the National Defense Council; the intervention and participation of the Armed Forces in maintaining peace inside the country as well protecting the nation internationally, as determined by the National Defense Council.

[Daily News Egypt, 7/12/2012] The Administrative Judiciary Court has decided to accept a request to go through with the Constituent Assembly dissolution case it had initially postponed to September. The court will now be looking at the case next week on 17 July.  The initial postponement of the case had given the assembly, tasked with drafting Egypt’s next constitution, enough time to finalize the charter before the court date. Bringing the case forward means that if dissolved, the Supreme Council of Armed Forces will have the right to appoint a replacement assembly as per the supplementary constitutional decree SCAF released in June.

[Egypt Independent, Al Ahram (Arabic), 7/12/2012] The office of President Mohamed Morsy issued a statement on Wednesday declaring that he would respect the Supreme Constitutional Court’s Tuesday ruling which effectively overturned his 10 July presidential decree to reinstate the People’s Assembly. The statement stressed that Morsy’s decree was intended to reinstate the People’s Assembly so that it could continue to perform its duties until parliamentary elections were re-staged, which would theoretically happen 60 days after approval of the new constitution that is currently being written. His decision was not meant to disrespect the judiciary or the ruling of the SCC that had originally disbanded the People’s Assembly, the statement continued.

[Daily News Egypt, 7/12/2012] Over the previous month, exports declined by 22% with a value of EGP 10.3 billion down from EGP 13.16 billion in June 2011. The total value of Egyptian exports in the first half of the current year was EGP 65.64 billion, a 4% decline from the same period in the previous year which saw EGP 68.5 billion in exports. Eight sectors witnessed sharp declines in the value of exports, including: Agricultural, textiles, food, leather, furniture, engineering products, and Construction material exports.

[Al-Monitor, 7/12/2012] In the coming days, Egypt’s Minister of Electricity and Energy Hassan Yunis will submit a detailed report to President Mohammed Morsi outlining the executive steps necessary to create Egypt’s first nuclear power plant, which is to be built in the town of Dabaa. The report includes an action plan to implement the nuclear program. The report was ordered in response to Egypt’s depleting traditional sources of energy and a need for environmental consciousness. What’s more, it has been understood that the economic feasibility of renewable energy is linked to future scientific progress.

[Egypt Independent, 7/12/2012] President Mohamed Morsy and Saudi officials discussed, during meetings in Jeddah, the cases of Egyptians detained in the kingdom’s prisons, as well as Saudi investments in Egypt and job opportunities for skilled Egyptian workers. Morsy also discussed ways to increase Saudi investments in Egypt with Crown Prince Salman bin Abdul Aziz. The crown prince, according to Ali, proposed that after Egypt’s new government is in place, officials and businessmen from both countries should hold further meetings to review investments and aspects of bilateral cooperation. There are an estimated 1 million Egyptians living in Saudi Arabia. Morsy is scheduled to meet with 300 of the community’s representatives on Thursday.

[Reuters, 7/12/2012] Israel said on Wednesday it would deploy a battery of Iron Dome rocket interceptors at a southern frontier town opposite Egypt, a move that follows cross-border attacks in the area. Israeli media reported that it was the first time the interceptors, which have been used against Palestinian rocket attacks from the Gaza Strip, were being set up at Eilat, near Israel’s borders with Egypt and Jordan. Israel’s border with Egypt has grown tense since a popular uprising ousted Egyptian President Hosni Mubarak last year. Two rockets fired across the frontier have struck in the Eilat area this year, without causing casualties. Egypt has denied they were shot from its territory. Concerns have arisen about how the peace will fare under Egypt’s new president, the Muslim Brotherhood’s Mohamed Morsy, although he pledged when he took office last month to uphold his country’s treaties.