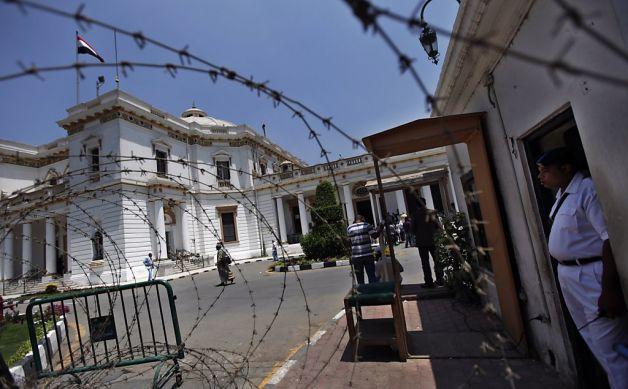 Egypt’s Supreme Constitutional Court  rejected its status in the first draft of the new constitution issued last week , at a press conference on Tuesday. Court president Maher al-Beheiry labeled the articles pertaining to the court’s status "a step backwards and a flagrant intervention in the court’s affairs."

Salafi leader: Constitution should restrict rights and freedoms
Constituent Assembly member and Salafi Dawah Spokesperson Sheikh Yasser Borhamy has said that the first draft of the new Egyptian constitution does not include agreed-upon stipulations that rights and freedoms should not conflict with established social values. Borhamy said that the unrestricted freedoms established in the draft suggest the freedom of paganism, Satanism and apostasy. [Egypt Independent, 10/16/2012]

SCC president: Court’s status in draft constitution ‘a step backwards’
Egypt’s Supreme Constitutional Court  rejected its status in the first draft of the new constitution issued last week , at a press conference on Tuesday. Court president Maher al-Beheiry labeled the articles pertaining to the court’s status "a step backwards and a flagrant intervention in the court’s affairs," adding that the court will remain in permanent session until amendments are made to the provisions which "endanger the court’s independence." [Ahram Online, Egypt Independent, Shorouk (Arabic), 10/16/2012]

Administrative Court to consider lawsuits against Constituent Assembly Tuesday
The Administrative Court will resume handling lawsuits demanding the dissolution of the Constituent Assembly Tuesday, just after the body announced it had finished the first draft of the new constitution. The court, in its last session, ordered plaintiffs to provide documents showing the rules through which assembly members had been selected and whether they had occupied any executive state posts. The court postponed the case until the end of the day. [Egypt Independent, al-Watan (Arabic),10/16/2012]

Public prosecutor investigates Tahrir violence
The public prosecution announced on Monday the start of investigations into 53 complaints filed over the clashes that took place in Tahrir Square on Friday. The complaints accuse acting Freedom and Justice Party head Essam al-Erian, pro-Brotherhood preacher Safwat Hegazy, Mohamed al-Beltagy and other leaders of the Muslim Brotherhood of mobilizing their supporters to use violence against peaceful demonstrators, leading to clashes, injuries and destruction of property. [Egypt Independent, 10/15/2012]

Petroleum minister: Gas exports to Jordan, Spain halted
Petroleum Minister Osama Kamal said that Egypt has stopped exporting gas to Jordan and Spain because of increasing gas consumption on the domestic market. The two countries understand why Egypt made this decision, he added. The minister said in his speech on Monday before the Shura Council that he has submitted a bill that would strengthen penalties against black market fuel dealers that will be discussed by the Cabinet in its Wednesday meeting. [Egypt Independent, 10/15/2012]

Turkey to grant Egyptian entrepreneurs 5-year entry visas
Egyptian enterpreneurs will now be granted five-year entry visas to Turkey in an effort to bolster trade exchanges between the two countries, state daily Al-Ahram reported on Monday, citing Turkish Ambassador to Cairo Hussein Awny. Previously, business visas to Turkey had only been issued for one-year periods, according to Al-Ahram. Earlier this month, Mostafa Mekawy, head of Egypt’s commercial service office in Turkey, announced that bilateral trade volumes had reached some $3 billion in the first half of this year. [Ahram Online, 10/15/2012]

TV host accused of defaming judiciary released on bail
TV host Reem Maged was released from custody on LE500 bail on Monday. Maged is accused of defaming the judiciary in her talk shows, particularly the criminal court that acquitted the six aides of former Interior Minister Habib al-Adly of killing protesters during the revolution. Several media figures have been investigated in these types of cases, including TV host Hala Sarhan, according to the daily Al-Wafd newspaper published by the Wafd Party. [Egypt Independent, 10/15/2012]

Independent unions declare new alliance
In a historic development, two independent workers’ groups and several political parties joined forces on Monday to establish the National Front for the Defense of Labor Rights and Union Liberties. The goals of the front include the cancellation of the restrictive Trade Union Law 35/1976, the issuing of the draft Trade Union Liberties Law promoting workers’ right to free association, protecting unionists and laborers against punitive sackings, confronting labor violations perpetrated by the state and/or employers, and the establishment of a just pay-scale based on a determined minimum and maximum wage (of no more than 15 times the minimum). [Egypt Independent, 10/15/2012]

Human rights not high on Morsi’s agenda, says rights report
A report released by a prominent Cairo-based human rights organisation on President Mohamed Morsi’s first 100 days in office argues that human rights have not yet become a serious part of Morsi’s strategy. The report, released by the Cairo Institute for Human Rights Studies (CIHRS) on Monday, says the president does not have a clear vision on human rights issues. CIHRS says human rights were not included in his initial 100-day plan, and he did not pay attention to initiatives raised to address the topic, including a 100-day plan that was presented to him by the Forum of Independent Human Rights Organisations on his first day in office. [Ahram Online, 10/15/2012]

Cairo asks Syria to clarify Egyptian deaths
Egypt’s foreign ministry said on Tuesday that it has asked Syria to clarify circumstances in which three Egyptians were killed in fighting in Aleppo and Homs since the start of the uprising in March 2011. The ministry said it sent an "urgent message" to Damascus demanding an explanation for the death of the men, after Syria said one of them headed an armed group in rural Aleppo. [AFP/Ahram Online, 10/16/2012]

Egypt’s constitution-drafting process moving in right direction: US
State Department spokesperson Victoria Nuland has described the drafting of Egypt’s new constitution as broadly democratic and moving in the right direction. Speaking at a press conference on Monday, Nuland stressed the importance of protecting human rights, women’s rights and minority rights when drafting the constitution. She also said the constitution was not complete and the US was not planning to give feedback on it before it was finished. [Ahram Online, 10/16/2012]