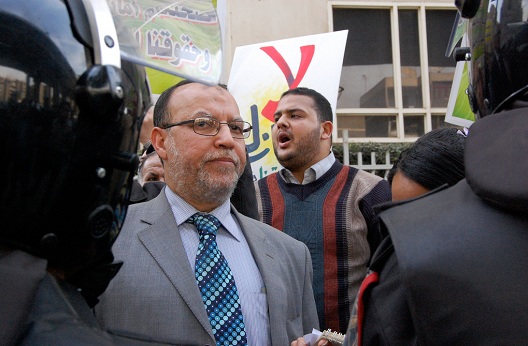 Essam al-Erian, a prominent Muslim Brotherhood member who had been on the run, has been arrested early Wednesday in the Fifth Settlement neighborhood of Cairo, after 100 failed attempts to catch him, according to security sources.
GOVERNMENT & OPPOSITION

Egypt government and Brotherhood should pursue reconciliation: Deputy PM
Egypt’s interim government and the Muslim Brotherhood should seek reconciliation because only an inclusive political process, not security crackdowns, can bring stability to the country, a senior minister said on Tuesday. Deputy Prime Minister Ziad Bahaa-Eldin has been trying to encourage both sides to compromise since he put an initiative to the cabinet in August. His proposal called for an immediate end to the state of emergency, political participation for all parties and the guarantee of human rights, including free assembly. Meanwhile, the state and the Prime Minister have made it a “priority” to fix Egypt’s security situation, which means “controlling the Muslim Brotherhood and limiting their capacities,” a source in Prime Minister Hazem El-Beblawy’s cabinet told Ahram Online. Speaking on condition of anonymity, the source added, this “does not mean the government wants to exclude anyone, but rather that security is a priority of the people.” The official’s remarks highlight the bottom-line of Beblawy’s cabinet, which has faced months of unease in the wake of former president Mohamed Morsi’s ouster in July. [Reuters, Ahram Online, EGYNews (Arabic), Shorouk (Arabic), Ahram Gate (Arabic), 10/29/2013]

Senior Brotherhood leader Essam al-Erian arrested
Essam al-Erian, a prominent Muslim Brotherhood member who had been on the run, has been arrested early Wednesday in the Fifth Settlement neighborhood of Cairo, after 100 failed attempts to catch him, according to security sources. Erian did not resist the security services during the process of arrest, and turned himself in once forces raided the apartment. Prosecutors have ordered his detention for thirty days pending investigations into charges of instigating street clashes. The vice president of the Muslim Brotherhood’s Freedom and Justice Party will be held for fifteen days over clashes between local residents and supporters of Mohamed Morsi in Giza’s Bayn al-Sarayat district in July, and for a further fifteen days over clashes near Giza’s al-Istiqama Mosque in August. [Ahram Online, Egypt Independent, AP, AFP, Reuters, Mada Masr, DNE, EGYNews (Arabic), Shorouk (Arabic), 10/30/2013]

Egypt’s Nour Party agrees to omit article defining Sharia, with conditions
The Salafist Nour Party’s representative on the constitution panel has laid out his conditions for accepting changes to the status of Sharia law in the amended charter. Salah Abdel-Maaboud told the privately-owned Al-Hayat channel on Tuesday that his party would agree to the removal of Article 219 if the word ‘principles’ is removed from Article 2. Meanwhile, controversies escalated inside the fifty member committee between representatives of Al-Azhar and other members because of Article 3, which states “Egyptian Christians and Jews have the right to use the canonical principles of their religions as the main source of legislation for their personal status laws, religious affairs, and the selection of their spiritual leaders.” Some have suggested rewording it to “non-Muslims” rather than Christian and Jews. This has led an Azhar representative, speaking on condition of anonymity, to say that he will ask his colleagues inside the committee to withdraw, and not to participate in this “disaster,” in the case that other members insist on adding “for non-Muslims” to the third article, which would allow members of non-Abrahamic religions, like Baha’is, to be recognized, according to the source. Abdel Ghany al-Hendy, the General Coordinator of the Popular Movement for the Independence of Al-Azhar, expressed support for the withdrawal of the Azhar representatives, claiming that the article will allow “Satanists” to demand that society to recognize them. Another source of controversy within the committee is a move to abolish Egypt’s upper house of parliament. Finally, Mahmoud Nafadi, head of the Press Syndicate’s Parliamentary Correspondents’ Association, filed a complaint at the State Council on Wednesday to challenge Egypt’s Constituent Assembly decision to vote on the draft constitution behind closed doors, according to Egypt’s state news agency MENA. [Ahram Online, Cairo Post, Egypt Independent, 10/30/2013]

Egypt aims to cut energy bill
Egypt is pressing ahead with plans to link 800,000 households to its natural gas grid by next July as the government works to reduce its soaring energy bills. Energy subsidies account for 20 percent of total state expenditure, but the government is taking steps to address the problem and possible abuse of the subsidy system by instigating a smart-card scheme for car drivers and by efforts to connect more people to the gas grid. [Reuters, 10/29/2013]

Human Rights Watch says new Egyptian law gives police power to ‘ban all protests’
Egypt’s new protest law, which is currently waiting to be passed by interim President Adly Mansour, grants police the ability to outlaw demonstrations, according to a recent report by Human Rights Watch (HRW,) which was released on Wednesday. According to HRW, the law requires that the police be notified if more than ten people gather in one place, and allows police to repress such gatherings. This will place strict limits on the freedom of political parties and non-governmental organizations to gather. “The bill would ban all demonstrations near official buildings, give the police absolute discretion to ban any other protest, and allow officers to forcibly disperse overall peaceful protests if even a single protester throws a stone,” said a Wednesday statement by the group. [Ahram Online, Cairo Post, 10/30/2013]

Brotherhood students at Egypt’s Al-Azhar storm university offices as protests continue
Egyptian police fired teargas on protesting students at Cairo’s al-Azhar university who had entered an administrative building on campus on Wednesday, a Reuters witness said. Students at the country’s top institution for Islamic teachings have been demonstrating for weeks in support of ousted President Mohamed Morsi. An informed security source said that Al-Azhar University President Osama al-Abd called on Interior Minister Mohamed Ibrahim to get police to intervene “to protect souls and public properties” following violations against administrative buildings. The source told Al-Masry Al-Youm on Wednesday that a police report was filed and reviewed by prosecution. Twenty-five were arrested amid the clashes, judicial officials told Al-Ahram. According to the lawyer representing the students, only eight of them are Azhar students. This was confirmed by a security source, who said many protesters had entered the campus illegally. Mahmoud Sobeiha, Azhar University security head, said that the arrested students will be handed over to the security forces, in a phone interview with privately owned ONTV. Meanwhile other campuses in Mansoura and Ain Shams also witnessed clashes due to pro-Morsi student protests. The clashes at Masoura campus left seventeen students injured, Youm7 reported.[Ahram Online, Reuters, Egypt Independent, Aswat Masriya, Mada Masr, Shorouk (Arabic), Cairo Post, 10/30/2013]

US lawmakers urge resumption of Egypt military aid
US lawmakers Tuesday urged the White House to lift its suspension of military aid to Egypt, warning freezing funds and weapons deliveries might unravel decades of cooperation with a key regional ally. They also said they were considering changes to a US law that bars sending assistance to governments that have been deemed to have seized power through a coup. Though many members of the House and the witnesses argued over specific points, one theme was echoed by all speakers: despite its setbacks on the democratic roadmap, Egypt is a vital US ally and the relationship should not be allowed to sour. In order to stay compliant with US law, USAID has suspended all activities that directly benefit the Egyptian government, including cash transfers and loan guarantees, as well as smaller services like providing technical expertise or working with public schools and universities. Meanwhile, Egyptian Foreign Minister Nabil Fahmy said on Monday that Egypt has experienced a historic change in its diplomatic ties with the United States following the ouster of president Mohamed Morsi. “Egyptian-American relations have changed after 30 June for the first in thirty years to a peer relationship,” said Fahmy during his speech at the American Chamber of Commerce in Cairo, in the presence of several diplomats and ministers. [AFP, Egypt Independent, Reuters, Mada Masr, SIS, 10/29/2013]

EU says ready to support political dialogue in Egypt
Stefan Fule, European Union Commissioner responsible for enlargement and European neighborhood policy, said the union is ready to support new political comprehensive dialogue in Egypt among all parties. In statements on Wednesday, Fule said a 90 million Euro aid program will be signed before end of the year. He also reiterated the EU’s deep conviction against all kinds of terrorism as well as killing soldiers in Sinai. [Egypt Independent/DPA, 10/302013]