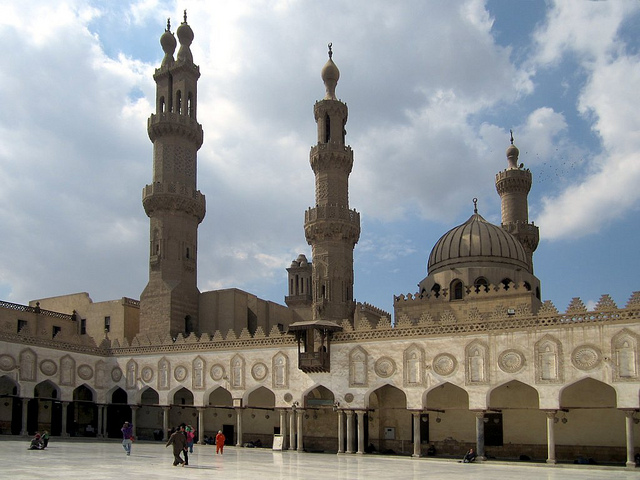 The Shura Council on Thursday approved laws governing the exercise of political rights and House of Representatives elections, while Al-Azhar approved a law that would allow the country, which is struggling with a soaring budget deficit, to issue sukuk (Islamic bonds), but said some articles passed by the Shura Council must be amended.

Shura Council approves election law
The Shura Council on Thursday approved laws governing the exercise of political rights and House of Representatives elections. Opposition politicians denounced the new statute and repeated a threat to boycott the vote. The Islamist-dominated upper house will now send the text to the Supreme Constitutional Court (SCC) to check the legality of the voting procedures for a new lower house. The court has 45 days to review the bill. If approved by the SCC, President Mohamed Morsi will be free to set a date for upcoming parliamentary elections. [Egypt Independent, Ahram Online, DNE, Reuters, 4/11/2013]

Egypt’s Morsi promotes top brass in bid to ease tensions with military
At the conclusion of a meeting between President Mohamed Morsi and Egypt’s Supreme Council for the Armed Forces (SCAF), the president promoted several top officers in an effort to thaw the recently strained relationship between the army and presidency. Morsi condemned what he called a campaign against the military, after a British newspaper cited a report that accused the army of torture and killing during the 2011 revolution. The Guardian said Morsi had been sitting on a confidential report from a fact-finding committee recommending the investigation of top army leaders over crimes during the ousting of President Hosni Mubarak. Following the meeting, defense minister Abdel Fattah al-Sisi issued a statement rejecting attempts to tarnish the image of Egypt’s armed forces. [Ahram Online, Reuters, Aswat Masriya, Egypt Independent, EGYNews (Arabic), 4/11/2013]

Shura Council divided over cathedral violence; Human Rights Council slams Interior Ministry
Members of the Islamist-dominated Shura Council were bitterly divided on Thursday as they viewed videos of Sunday’s violent attacks on St. Marks Coptic Orthodox Cathedral in Abbasiya, submitted by the Interior Ministry for their review. The video in question allegedly showed Coptic youth on a church rooftop, initiating violent clashes with the police. Coptic MPs angrily objected to the video, saying it was not an accurate portrayal of the events. The National Council for Human Rights issued a report on the Khusus violence, accusing state bodies of being absent during the incident, particularly the Interior Ministry, whose negligence allowed the conflict to escalate into an episode of deadly sectarian strife. The report also criticizes Sorial Yunan, the pastor of the Khusu Church, for claiming that all churches in the neighborhood were set ablaze. The Qalyubiya governor has formed a popular committee in an attempt to address the problems in Khusus. [Egypt Independent, Shorouk (Arabic), 4/11/2013]

Cabinet denies new committee amending Constitution
The government has not formed a committee to amend the Constitution, announced Cabinet spokesperson Alaa al-Hadidy on Thursday in response to reports published in the state-run news agency MENA on Wednesday, which quoted Prime Minister Hisham Qandil as saying that the Cabinet was forming such a committee. The spokesperson claimed that Qandil was actually referring to the formation of the Supreme Committee for Legislative Affairs, which was established by the prime minister’s decree to ensure that draft laws comply with the Constitution. [Egypt Independent, 4/11/2013]

Egypt debts to oil firms highlight subsidies struggle
Egypt owes at least $5 billion to oil companies, half of it overdue, corporate reports have revealed, in a development highlighting the country’s struggle to meet soaring energy bills while subsidizing prices to avoid public unrest. Most oil firms hope to recoup the debts in full, but they acknowledge it could take years. While they are still planning to invest in new projects in Egypt that will help it avoid an energy meltdown, the debt situation remains a challenge. The government’s delay in paying its debts to oil and gas producers could hold back investment in the sector and potentially endanger Egypt’s energy security. [Reuters, 4/12/2013]

Al-Azhar approves sukuk law
Al-Azhar on Thursday approved a law that would allow the country, which is struggling with a soaring budget deficit, to issue sukuk (Islamic bonds), but said some articles passed by the Shura Council must be amended. The scholars have agreed to the bill on Islamic bonds, also known as sukuk, on condition that certain articles are amended, according to a statement from the Senior Scholars Authority, part of al-Azhar. [Reuters/Egypt Independent, 4/11/2013]

Shura Council discusses tax law
On Thursday, the Shura Council discussed a draft income tax law submitted by the government. Freedom and Justice Party MP Ashraf Badr al-Din said that the government is preparing to raise the exemption limit to 18,000EGP, adding that the economic committee’s approval of the amendment, saw Egypt’s stocks increase by 2%, bringing in profits of 4 billion EGP in one day. Nour Party MP asked that discussions on the draft law be postponed as the amendments would see an additional burden on investors, and in turn raise prices on products bought by low-income citizens. [Shorouk (Arabic), 4/11/2013]

Egypt crisis threatens food for poorest: World Food Programme
Egypt’s economic crisis poses a threat to basic nutrition in the country of 84 million people where the poorest spend more than half their income on food, the World Food Programme (WFP) said on Thursday. WFP country director Gian Pietro Bordignon’s warning underscores one of the main challenges facing President Mohamed Morsi’s government as it grapples with an economic crisis caused by two years of instability. "The economic crises are putting more and more people in a very risky situation," Bordignon told Reuters in an interview. "The situation is deteriorating and has to be tackled right now because it’s a very risky trend." [Reuters, 4/11/2013]

Egyptians gather in Cairo’s Tahrir for rally against sectarianism protests
People began gathering in Tahrir Square early Friday morning, where a podium has been set up ahead of planned protests against sectarianism, Egyptian state news agency MENA reports. Mazhar Shahin, known as the ‘Tahrir Preacher’ for leading prayers during Egypt’s 18-day uprising in 2011, is expected to lead Friday prayers. Shahin’s work in the Omar Makram Mosque – located adjacent to the square – was recently suspended by the religious endowments ministry after the preacher allegedly criticized President Mohamed Morsi in a sermon. The call for Friday’s demonstrations, which has not been formally endorsed by any political parties, was initially issued by the al-Azhar Preachers’ Front, a group of preachers supporting civil state, according to MENA. Demonstrators intend to protest recent sectarian clashes that broke out last week in Khusus. [Ahram Online, 4/12/2013]

EMHRN demands NGO draft law withdrawal
The current non-governmental organization (NGO) draft law should be repealed, said the Euro-Mediterranean Human Rights Network (EMHRN) on Thursday. The network of human rights organizations said that one that is in “compliance with international human rights standards” should replace the current draft.  “The EMHRN greets the indications that human rights, in particular gender equality and the draft NGO law were addressed during the meeting between [European Union] High Representative [Catherine] Ashton and President [Mohamed] Morsi on 7 April,” said Moataz El Fegiery, a member of EMHRN’s Executive committee, in a press release. “However these talks should be followed by action and immediate withdrawal of this draft law,” he added. [DNE, 4/11/2013]

Presidential aide says Egypt welcomes advice, not intervention
Egyptian President Mohamed Morsi’s secretary on foreign affairs said in a letter to the editor in the Washington Post on Wednesday that the Arab world’s most populous country will not be “directed from Washington.”  In an article to respond to an editorial posted on April 2, Khaled al-Qazzaz, argued that US influence on Egypt under the previous government is what set the ground for the 2011 uprising that toppled Hosni Mubarak, citing "violations of dignity, repression (and) economic misdistribution" as triggers. [Aswat Masriya, 4/11/2013]

Cabinet to partner with EU on draft bill regulating smuggled funds
The Cabinet has agreed to adopt an initiative in partnership with the European Union that would create a new law to “shift the burden of proving the legality of smuggled funds to the symbols of the former regime who made the deposits,” said Justice Minister Ahmed Mekky on Thursday. The Egyptian government will work on the initiative with the ambassadors of Switzerland and the Netherlands, as well as with the British home secretary. Mekky told Al-Masry Al-Youm that the new bill is expected to be issued in June, if approved by the rest of the European Union members. [Egypt Independent, 4/11/2013]