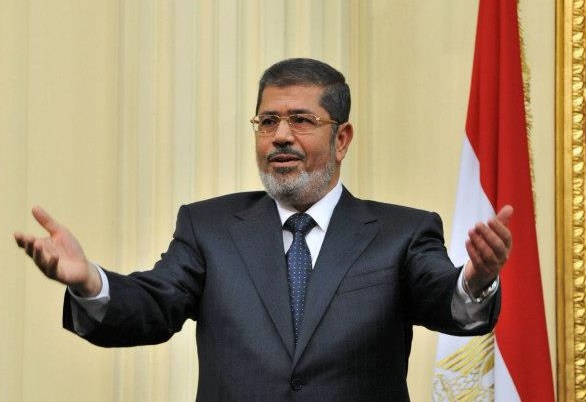 Egypt’s cabinet reshuffle will see six ministers replaced, al-Ahram Arabic news website has reported, citing a government source. President Morsi had intended to replace ten ministers, the source added, but the number was trimmed to six because he could not persuade enough replacements to join his cabinet.

Six ministers to change in Egypt cabinet reshuffle: Government source
Egypt’s cabinet reshuffle will see six ministers replaced, al-Ahram Arabic news website has reported, citing a government source. President Morsi had intended to replace ten ministers, the source added, but the number was trimmed to six because he could not persuade enough replacements to join his cabinet. The difficulty in finding replacement ministers is also why the reshuffle was delayed, the source added. The new ministers, who could be sworn in next Tuesday, are expected to be those of justice, legal and prosecution affairs, culture, agriculture, planning and international cooperation, as well as one of the economic portfolio ministries, added the source. Former head of the constituent assembly, Hossam al-Gheriany’s name came up as a possible candidate as Minister of Justice, while Mohamed al-Sawy has reportedly been tapped to become Minister of Culture. Meanwhile, the Egyptian presidency will also announce members of its legal and judicial consulting teams "within days," an informed source close to the presidency told Turkish news agency Anadolu on Wednesday. [Ahram Online, Reuters, Youm7 (Arabic), 5/2/2013]

Morsi to meet with heads of student unions; Egypt PM meets al-Azhar students
President Mohamed Morsi will meet with the heads of university students’ unions and their deputies next Saturday at the Ettihadeya presidential palace. The president will hold an open discussion with the group and will exhibit the efforts of the state to support university students, presidential spokesman Amr Amer said on Wednesday. Egyptian Prime Minister Hisham Qandil met with Al-Azhar University students on Wednesday to discuss a second mass food poisoning incident on campus. [Aswat Masriya, SIS, Ahram Online, 5/2/2013]

Information Minister Criticizes media
“The misuse of freedom is a form of backwardness” said Minister of Information Salah Abdel Maqsoud at the opening of the Fifth Forum of the Association of Purposive Visual Media. Abdel Maqsoud said that the forum came at a perfect time as negative practices are spreading in media and hindering its reform. These negative practices included focusing on the content that leads to “depression” and disregarding positive events that speak of hope. He accused media of fabricating news and misusing freedom. He also expressed his support for establishing a syndicate for media professionals and safeguarding its independence. [DNE, 5/2/2013]

Nour, Sufis reject Salafi call for “State Security” protests
Dr. Ashraf Thabet, deputy head of the Salafi Nour Party, announced that Nour members would not participate in the protests organized by Dr. Hossam Abul Bokhary, titled “Say Hello to State Security” scheduled on Thursday. Thabet confirmed his party’s rejection, citing the danger of escalating tensions and the importance of working with the interior ministry to solve problems. Leaders of Sufi order in Egypt also rejected the demonstration aimed at dissolving the National Security Agency, claiming it to be an act of “thuggery” designed to enforce a “brotherhoodization” strategy of sovereign state agencies. They called on the Egyptian people to intervene to stand in the face of these schemes and prevent its implementation. [Shorouk (Arabic), Al Masry Al Youm (Arabic), 5/2/2013]

Also of Interest:
Morsi and Sisi open a number of strategic projects; president stresses importance of coordination with the military | Ahram (Arabic)

Egypt judges advise against appeal to oust president Morsi
State commissioners of Egypt’s administrative court recommended rejecting a case to oust President Mohamed Morsi, saying that it does not fall under the legal jurisdiction of the State Council on Wednesday. The commissioners’ report said that the House of Representatives (parliament) is the only entity that can take legal action against the president. It added that the constitution does not stipulate grounds for presidential impeachment. [Aswat Masriya, 5/2/2013]

Egyptian prosecutors question comedian over jokes on al-Bernameg
Khaled Mansour, a standup comedian on Bassem Youssef’s al-Bernameg show, was questioned by prosecutors on Thursday morning. Mansour, who is accused of insulting the president and insulting religion, was released on LE5,000 bail. Bassem Youssef, Egypt’s most prominent satirist, said on Wednesday via Twitter that Mansour would be questioned over a segment in the sixth episode of al-Bernameg that mocked President Morsi’s allegedly ostentatious appearances at mosques for Friday prayers. Mansour is the third comedian to face questioning for material performed on al-Bernameg. [Ahram Online, Aswat Masriya, DNE, Al Masry Al Youm (Arabic), 5/2/2013]

Sultan calls on SCC to strike al-Gebali verdicts
Any Supreme Constitutional Court verdicts made while former judge Tahany al-Gebali was a member of the court’s bench should be stricken and invalidated, al-Wasat Party Deputy Chairman Essam Sultan said on Wednesday. Sultan’s comments came after al-Gebali made a television appearance on Tuesday where she admitted voting for presidential candidates Hamdeen Sabahy and Ahmed Shafiq in the first and second rounds of the presidential elections respectively. [DNE, 5/1/2013]

Egypt Islamic bonds could attract $15 bn annually: Finance official
Sovereign Islamic bonds, or sukuk, could attract $15 billion in investments to Egypt annually from domestic and foreign investors, according to statements made by an advisor to the finance minister to the state-run MENA news agency. Ahmed al-Naggar, who manages affairs related to Islamic bonds at the finance ministry, expects the government issue of Sharia compliant debt instruments to spur Egypt’s economic growth and employment figures. The law on issuing sovereign Islamic bonds was finally passed Tuesday by Egypt’s upper house of parliament, the Shura Council, after members unanimously voted in favor of adopting amendments to the law suggested by the Council of Grand Clerics of al-Azhar, Egypt’s highest Islamic authority. [Ahram Online, 5/1/2013]

Wheat shipments arrive at Alexandria, new price system to be implemented
Five liners coming from the United States, Australia, Brazil, Romania and Ukraine arrived at the port of Alexandria on Wednesday carrying a total of 227,000 tons of wheat. Acting Director of the Supply Directorate in Alexandria, Mohammed Ibrahim Al Khalifa, said on Thursday that the Ministry of Supply will enact a new system liberalizing 82% of the flour extract after reserves for bakeries are exhausted. He explained that the reserve balance for bakery owners of flour dishes extraction of 82% has not yet been implemented, but has received no rejection of the proposal. [DNE, EGYNews (Arabic), 5/2/2013]

Egyptian army uncovers, destroys tunnel to smuggle vehicles into Gaza Strip
The Border Guards of the Western Military Zone managed on Wednesday 1/5/2013 to abort an attempt to smuggle arms and machine guns in the northern Salloum ground terminal. Some six sacks contain 34 machine guns and 34 ammunition magazines. Moreover, some 8 machine guns have been seized while being hidden inside a secret cache and inaccessible place to some 6 kilometers to the south of Salloum terminal. They arrested 31 Egyptians, Palestinians, Syrians and Sudanese while trying to illegally cross the western border. [SIS, 5/2/2013]

Al-Azhar and students establish committee
The Grand Imam of al-Azhar, Ahmed al-Tayeb, announced that a committee is being formed to deal with the pressing issues faced by students at al-Azhar University, state-run news agency MENA reported on Tuesday evening. Al-Tayeb said he would personally follow up on the results of the investigations currently taking place into the mass food poisoning of al-Azhar students. The new committee will oversee the student dormitories and propose staff changes in cases of employee negligence. The committee will also be tasked with the development of restaurants on campus and maintaining hygiene standards through the preparation of monthly reports submitted to the university council. Al-Tayeb wants the committee to formulate a short-term plan to improve all student services. The Azhar Student Union also denied accusations of breaking into the dormitory kitchens to contaminate the food. [DNE, Youm7 (Arabic), 5/1/2013]

Detention of activist Ahmed Douma sparks protests
Scores of protesters rallied in front of Beheira’s security directorate to demand that the ministry reveal the location of activist Ahmed Douma on Wednesday. Douma had been arrested and detained for four days pending investigation on charges of insulting President Mohamed Morsi. Demonstrators from the Democratic Front Party and the Arab Revolution Youth Movement gathered at the security directory and chanted slogans demanding to know Douma’s whereabouts. [Aswat Masriya, 5/2/2013]

Egypt professor prevented from teaching for insulting religion
An Egyptian professor who was questioned over allegations that included insulting religion filed a legal complaint on Wednesday against the university’s vice-president for preventing her from performing her job. Mona al-Brince, a professor of English at Suez Canal University, told Aswat Masriya that when she arrived to campus on Tuesday, she was surprised to have University Deputy Shaker Rezk prevent her from teaching. Suez Canal University President Maher Mosbah has ordered that Professor Brince be questioned after her students and head of department filed complaints against her, accusing her of insulting religion and failing to be present for her lectures. [Aswat Masriya, 5/2/2013]

Iran calls on Egypt to convene a meeting of the Quartet to discuss Syria
Ali Akbar Salihi, the Iranian foreign minister, called on Egypt to quickly convene the Quartet on Syria, affirming Tehran’s readiness to host or attend talks in any country at the level of foreign ministers or presidents. An Iranian source in Cairo reiterated the great development of Egyptian-Iranian relations after the revolution of January 25, and expected to see an improvement in relations during the coming period. [Al Masry Al Youm (Arabic), 5/2/2013]