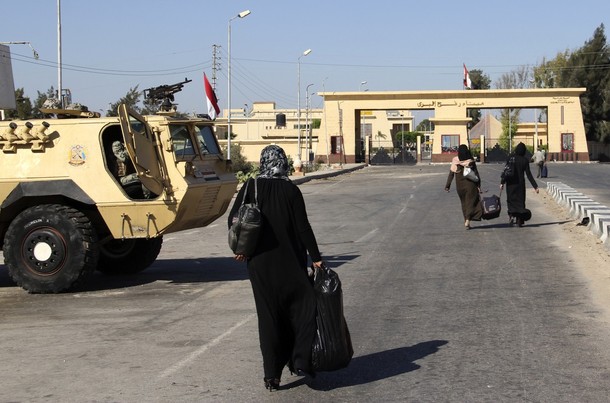 Six suspects in the Sunday attack in Sinai were arrested following a joint operation between the police and the armed forces in Sheikh Zuwayed, North Sinai, state television reported on Friday. The operation was part of a larger crackdown in the Sinai area after a series of assaults were launched against security checkpoints, beginning with Sunday’s attack on the Egypt-Israel border near Rafah which left 16 soldiers dead.

Committee on retrieving embezzled funds to be restructured, says PM

[Egypt Independent, EGYNews (Arabic) 8/10/2012] The committee tasked with retrieving funds stolen by figures from the former Mubarak regime will be restructured, announced Prime Minister Hesham Qandil on Thursday. The decision came during a meeting with committee members as well as the ministers of finance, justice, parliamentary and legal affairs, planning and international cooperation. Also present were the secretary general of the Cabinet and Assem al-Gohary, the assistant minister of justice for the Illicit Gains Authority. The Cabinet decided to add new members to the committee that would represent the banking, political and popular sectors, according to today’s statement. Qandil claimed that the government is eager to retrieve the embezzled funds and is working hard to do so. Gohary told Al-Masry Al-Youm in May that “we have only managed to locate an estimated CHF410 million (LE 1 billion) held in Swiss banks that was embezzled by 17 former officials, including former President Hosni Mubarak and his two sons."

[Egypt Independent, BBC, Al Ahram (Arabic) 8/10/2012] Six suspects in the Sunday attack in Sinai were arrested following a joint operation between the police and the armed forces in Sheikh Zuwayed, North Sinai, state television reported on Friday. The operation was part of a larger crackdown in the Sinai area after a series of assaults were launched against security checkpoints, beginning with Sunday’s attack on the Egypt-Israel border near Rafah which left 16 soldiers dead. The arrested are “terrorist” elements, state TV quoted a military source as saying. State-run newspaper Al-Ahram also quoted a high-level military source as saying that the suspects belong to radical groups. Egypt’s state-run Nile TV put the number arrested at nine.

[Egypt Independent, Al Masry Al Youm (Arabic) 8/9/2012] The initial forensic report on the bodies of the Rafah checkpoint attackers suggests that the perpetrators were wearing military uniforms made in Nablus, Palestine at the time of the attack. Five bodies were 99 percent burned from an explosion, while a sixth had gunshots throughout his body. They were all men in their thirties with reportedly Arab features. Their DNA was taken to be matched against that of criminals currently wanted by the police.

[Egypt Independent, El Watan (Arabic) 8/10/2012] Interior Minister Ahmed Gamal Eddin on Thursday asked Sinai tribal chiefs to cooperate with security authorities in the Sinai Peninsula, where attacks on security installations have increased in recent months. Gamal Eddin told tribal chiefs during a meeting Thursday that the honorable citizens of Sinai should play a major role in securing the peninsula and the border, a security source said. The source added that Gamal Eddin called on the tribal chiefs not to harbor fugitives and to cooperate with security forces to eliminate “the forces of evil and terrorism that seek to cause chaos and destruction.” Gamal Eddin promised firearms permits to those who possess weapons, the source said, while also warning that he had instructed security forces to deal strictly with anyone who openly carries a weapon and attempts to use it against police or military personnel.

[Egypt Independent, El Wafd (Arabic) 8/10/2012] President Mohamed Morsy said after Friday prayers that he was heading the operations currently taking place in Sinai and following the developments hour by hour. He added that the operations will continue until the security situation is stable, and called on people to confront anyone who attempts to harm national security. There must be mutual respect between citizens and the police and armed forces, Morsy said. “If any of them transgresses, I’ll punish him. Justice is my responsibility,” he continued. “We demand security from security men because this is their responsibility.”

[Ahram Online 8/10/2012] Egypt’s exports of natural gas and its derivatives rose by 8.9 percent in the first five months of 2012, hitting US$964.4 million as compared to US$885.7 million for the same period in 2011, an increase of US$78.7 million. The monthly bulletin of economic and social indicators produced by the Cabinet’s Information and Decision Support Center showed a 1.59 percent decline in the production of natural gas from January to May 2012, dropping from 19,591 tons in 2011 to 19,279 tons this year. The bulletin also showed that domestic consumption of natural gas has increased during the same period by 6.89 percent, while electricity consumption went up 1.3 percent.

[Egypt Independent 8/9/2012] President Mohamed Morsy said Thursday that he supports the idea of forming a national council to oversee state and private media. During the radio program “The people ask and the president answers,” Morsy said media figures should be more transparent in how they report on news, and should also be committed to a higher standard of ethics in journalism. “I know that media figures support what’s in the best interests of the nation,” Morsy said, adding that he is sure the Egyptian media will attain a higher level of quality in the coming period, while still leaving room for different viewpoints. Figures in the Muslim Brotherhood have complained on several occasions about media bias against Islamists, particularly as the Brotherhood became prominent in the political arena after the January 2011 revolution.

[Ahram Online/Reuters, 8/10/2012] An Egyptian television channel owned by prominent talk show host Tawfiq Okasha ceased transmission at 5pm on Thursday on orders of Egyptian state authorities, which ordered the station’s closure for at least one month. The order comes following a lawsuit filed by the Muslim Brotherhood’s Freedom and Justice Party (FJP), which has accused Okasha of inciting violence against the Brotherhood and encouraging attacks on President Mohamed Morsi, who hails from the Brotherhood’s ranks. The latest development concerning Okasha’s Faraeen television channel has been used as a rallying point by both pro- and anti-Brotherhood elements to further their respective political causes.

[Egypt Independent 8/9/2012]  More than 1,300 Egyptians have been evacuated from Syria since 19 July, said Foreign Ministry spokesperson Amr Roshdy on Thursday. "The acting ambassador in Syria, Alaa Abdel Azizi, has negotiated the evacuation of 915 Egyptian citizens through the Damascus International Airport, and 443 others through Aleppo Airport. The state paid for the evacuation of 273 Egyptians," Roshdy stated. Efforts by the Egyptian embassy also resulted in the release of 168 Egyptians detained by Syrian authorities, who have now been brought home, said Roshdy.

[Egypt Independent, Al Jazeera (Arabic) 8/10/2012] The Egyptian authorities opened one side of the Rafah border crossing between Egypt and Gaza on Friday to allow Umra pilgrims coming from Saudi Arabia to return to Gaza, an official source told Al-Masry Al-Youm. The source did not specify how long the crossing would be open. The head of the Hamas government in Gaza had urged Egypt on Thursday to open the vital border crossing, closed since gunmen killed 16 Egyptian guards in neighboring Sinai on Sunday, Reuters reported. The Hamas Interior Ministry in Gaza said Egypt had agreed to a limited reopening of the border, which would permit hundreds of Gaza residents stranded in Sinai to cross back into the coastal territory on Friday. But nobody would be permitted to reach Egypt from Gaza.