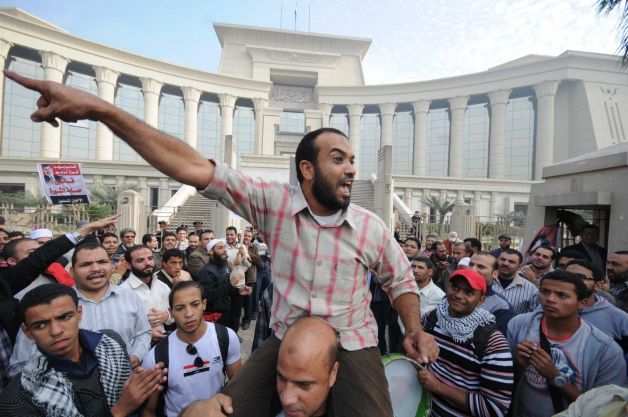 The Supreme Council for supervising the constitution referendum, which is slated for 15 December, has been formed, a source told Al-Ahram Arabic news website on Tuesday.
Judge Samir Abou El-Maati, head of Cairo’s Appeal Court, will be in charge of the council, added the source who was not named.

Judgment day for constitution set
The referendum on the constitution will be held on 15 December, just two weeks after the draft was finalised. President Mohamed Morsi announced the date on Saturday night after formally receiving the final version of the draft constitution after it was finalised Thursday by the Constituent Assembly. The announcement will do little to reconcile a polarised population. A sit-in in Tahrir Square is ongoing, challenging President Morsi’s recent constitutional declaration. However tens of thousands of Islamists staged a march Saturday in support of Morsi. [DNE, 12/2/2012]

Ministry directs preachers to not express stance on declaration
The Endowments Ministry ordered its preachers nationwide not to express their stance on the 22 November constitutional declaration, which gave President Mohamed Morsi’s decrees immunity from judicial challenges. Ministry spokesperson Salah Abdel Qawy told Turkish news agency Anadolu that the ministry has decided to ban discussion of the constitutional referendum, the president or any other political issues or parties, saying that the new measure aims to preserve mosques’ independence and neutrality. [Egypt Independent, 12/3/2012]

Opposition calls for protest marches to presidential palace Tuesday
Nearly 20 opposition political parties and activist groups have called for marches to the presidential palace on Tuesday in a million-man demonstration titled “Last Warning,” to protest against the newly drafted constitution and its upcoming referendum vote on 15 December.
The opposition forces, joined together at a sit-in in Tahrir Square that began last week, stressed that they would continue to hold public sit-ins until their demands are met. [Egypt Independent, DNE, Ahram Online 12/2/2012]

Supreme council overseeing Egypt’s constitution poll formed
The Supreme Council for supervising the constitution referendum, which is slated for 15 December, has been formed, a source told Al-Ahram Arabic news website on Tuesday.
Judge Samir Abou El-Maati, head of Cairo’s Appeal Court, will be in charge of the council, added the source who was not named. The voting of the national charter will take place from 8-11 December for Egyptian expats. Judge Mohamed Awad, the head of the Alexandria Appeal Court and a member of Judges for Egypt said that around 90 per cent of judges will take part in monitoring the upcoming constitutional referendum.[Ahram Online, Egypt Independent, 12/3/2012]

Egypt’s Supreme Judiciary Council agrees to supervise constitution poll: Al-Jazeera
Egypt’s Supreme Judiciary Council announced on Tuesday that it will delegate judges and members of the prosecution to supervise the constitution referendum, Al-Jazeera channel has reported. Several Judges in Egypt had announced that they will not be supervising the voting on the constitution in protest of the president’s constitutional declaration issued on 22 November which is seen as a threat to their independence. [Ahram Online, Ahram (Arabic), 12/3/2012]

SCC: Protests blocking court ‘dark day’ for judiciary
The Supreme Constitutional Court released a statement Sunday condemning the protests that blocked judges from entering the building to hear lawsuits challenging the Constituent Assembly and the Shura Council, describing the events as a “dark day” for the judiciary. “As judges were close to the court in the morning, they found protesters surrounding the building, blocking its gates, climbing its fence and chanting anti-judge slogans inciting people against [the judges]. Judges couldn’t access the court, as this would have endangered them due to the unstable security condition,” the court’s statement read. Dozens of supporters of President Morsi have continued their protest outside the Supreme Constitutional Court for a third day.[Egypt Independent, Ahram Online, 12/2/2012]

PM: Government restored LE20 bn by resolving disputes with companies
The government has resolved disputes with 46 companies, gaining about LE20 billion for Egypt, Prime Minister Hesham Qandil said during an economic conference, while adding that boosting investments and developing legislation, laws and the financial sector are at the top of the government’s priorities. “Democratic Egypt offers great chances for investors. Now they can invest in an unprecedented atmosphere of transparency. On the other hand, there are some challenges still facing us. We are determined to face and overcome them,” Qandil said during the opening of the 16th annual African Stock Exchanges Association conference. [Egypt Independent, 12/3/2012]

Egypt stocks tumble on constitutional crisis
Egypt’s stocks plunged on Monday with the country’s political crisis still unfolding, as most analysts have predicted. Egypt’s benchmark EGX 30 fell 1.43 per cent to 4824 points.  The broader-based EGX 70 index also saw a decline by 0.82 per cent. Around 83 listed stocks are suffering losses on Monday, headed by heavyweight shares Orascom Construction Industries (OCI) and Commercial International Bank (CIB) that both tumbled by 1.67 per cent and 1.03 respectively. [Ahram Online, 12/3/2012]

Egypt opposes diversion of Turkish shipping routes to Israel
Egypt opposes Turkey’s practice of diverting shipping routes from Damietta and Port Said harbors to the Israeli port of Haifa, state-run Al-Ahram newspaper reported Monday. The paper quoted an informed Transportation Ministry source as saying that the problem was discussed with the Turkish ambassador in Cairo, who said such procedures are set by the Turkish division of the Commercial Chambers Union. [Egypt Independent, 12/3/2012]

Al-Ahram website journalists strike over Morsi declaration
A large number of reporters at the website of state-run Al-Ahram newspaper decided to strike Monday in solidarity with 11 other independent and party-run newspapers, all of which suspended activities over President Mohamed Morsi’s most recent constitutional declaration and the new draft constitution. The reporters issued a statement urging other state papers to follow suit, saying that they had called for a protest. The statement added that the draft constitution has severely neglected the status of the press and journalists. [Egypt Independent, 12/3/2012]

Brotherhood to hold nationwide dialogues to boost constitution support
Senior members of the Muslim Brotherhood held an urgent meeting Sunday to consider possible ways to bolster popular support for President Mohamed Morsi’s call for Egyptians to vote in a referendum on the constitution on 15 December, group sources told Al-Masry Al-Youm. Sources from the group said the Guidance Bureau instructed administrative offices in governorates around the country to form groups to hold dialogues with people over the constitution and the importance of approving it. [Egypt Independent, 12/3/2012]

Women’s rights activists call for ‘no’ vote on constitutional referendum
A group of activists has called on Egyptians — particularly women — to not accept what they described as “a constitution of the Muslim Brotherhood supreme guide.” In a statement, the women’s committee of the Egyptian Social Democratic Party said not including articles on women’s rights in the constitution opens up the possibility of legal changes to the rights of women in education, work and personal status laws. [Egypt Independent, 12/2/2012]

55 November clashes defendants released
The Qasr al-Nil Misdemeanor Court released on Sunday 55 defendants accused of assaulting police forces at Simon Bolivar Square near the US Embassy and on Mohamed Mahmoud Street near the Interior Ministry, on bail of LE1,000 each. The defense said the defendants were arrested randomly by police officers and were innocent of the charges. Tight security was imposed in front of the court during the hearing. [Egypt Independent, 12/2/2012]

High security at Egypt’s presidential palace ahead of anti-Morsi protests
Egypt’s security forces have increased their presence around the presidential palace ahead of Tuesday’s mass rallies against President Mohamed Morsi’s recent Constitutional Declaration and the passing of the draft constitution. Around 15 Central Security Forces trucks have been stationed at the palace in addition to four armoured vehicles. [Ahram Online, 12/3/2012]

US ambassador hears opposition demands from Wafd leaders
The US ambassador to Egypt learned of the anti-Mohamed Morsi opposition’s position on the constitutional referendum scheduled for 15 December in a meeting with leaders of the liberal Wafd Party, the party’s vice president said. Wafd Party head Al-Sayed al-Badawy told Ambassador Anne Patterson the referendum is a “catastrophe because there is no consensus on the constitution between all political forces,” vice president Ahmed Ezz al-Arab said, adding that the ambassador listened, but did not comment. “He also warned of a revolution of the hungry.” [Egypt Independent, DNE, 12/2/2012]