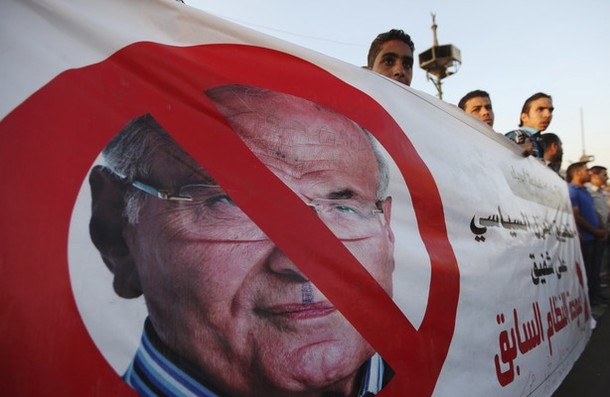 An Egyptian judicial body recommended on Wednesday that two crucial laws be overturned, allowing former President Hosni Mubarak’s prime minister to stand for election and possibly dissolving a parliament dominated by his Islamist foes. The supreme court is due to rule on the laws on June 14, two days before a run-off parliamentary election between former premier Ahmed Shafiq and the Muslim Brotherhood’s Mohamed Mursi, the two candidates won the most votes in a first round in May.

Parliamentary political parties are due to meet with the Supreme Council of the Armed Forces (SCAF) 2:30pm Thursday, at the end of a 48-hour grace period granted by the ruling military council for the political forces to determine the formation of the constituent assembly. This follows a heated meeting at the Wafd Party headquarters that lasted until 4am Thursday morning between delegates of Egypt’s parliamentary forces, who reached a tentative agreement. After hours of wrangling, however, the meeting’s delegates agreed that 39 of the 100 seats would be designated to political parties, 15 to judges, 9 to religious figures, 10 public figures, 10 revolutionary youth (women and men), 7 to workers and farmers unions, 7 to professional syndicates, a representative from the police, another of the army and one from the Ministry of Justice. The Free Egyptians Party, Egyptian Social Democratic Party, and Egyptian Bloc MPs walked out as they felt that the FJP parliamentarians would take over the assembly.

The People’s Assembly Proposals and Complaints Committee will consider a draft law to establish a government authority to fight corruption. Composed of 22 articles, the draft law proposes that the authority be completely independent from other state institutions, but administratively affiliated to People’s Assembly. People’s Assembly Speaker Saad al-Katatny submitted the draft law, which was submitted by MP Yasser al-Qady. The newly proposed authority would be the first such Egyptian authority affiliated with Parliament. The authority would be tasked with fighting all forms of financial and administrative corruption through investigations, collecting information and evidence. It would also have the right to obtain information related to crimes from all state institutions.

An Egyptian judicial body recommended on Wednesday that two crucial laws be overturned, allowing former President Hosni Mubarak’s prime minister to stand for election and possibly dissolving a parliament dominated by his Islamist foes. The supreme court is due to rule on the laws on June 14, two days before a run-off parliamentary election between former premier Ahmed Shafiq and the Muslim Brotherhood’s Mohamed Mursi, the two candidates won the most votes in a first round in May. The court’s decisions will be key in deciding how Egypt makes its difficult transition out of 60 years of military-backed rule. It could overturn electoral laws on the basis of which the Islamist-dominated parliament was elected – possibly requiring parliament to dissolve – and could also overturn legislation that parliament passed in April to bar top Mubarak-era officials such as Shafiq from running for president. The judicial body is known as the commissioners of the Supreme Constitutional Court, whose opinion is not binding on the court but is an indication of how the court might rule. The body came down against the Islamist-dominated parliament.

The former senior program officer for Freedom House’s Middle East and North Africa programs accused in the NGO funding case expects the Egyptian government to lead a broader crackdown on civil society organizations if the court convicts the suspects. Sherif Mansour, an American citizen, told Al-Masry Al-Youm that after the difficulties of working for an international NGO in Egypt, he is thinking about establishing a local organization to support democracy. Mansour noted that he came to Egypt on his own free will, denying that any of investigation authorities had summoned him, as he was outside Egypt before the case was filed. The real reason he resigned from Freedom House was because of arguments with its administration over returning to Egypt for the trial.

Egypt’s Orascom Construction Industries (OCI) has secured a $100 million loan from the World Bank’s investment arm to help it expand across the region and rebuild confidence in the country’s private sector. The loan from the World Bank’s International Finance Corporation (IFC) would be used for existing operations and new projects, Orascom said. "This investment fits with our strategy of boosting confidence in Egypt’s private sector, a major contributor to employment," IFC Middle East and North Africa director Mouayed Makhlouf said in the statement.

Egypt will not see any rises in petrol prices as the current fuel crisis is not caused by an overall shortage in state supplies, the country’s Minister of Petroleum said on Wednesday. Speaking to the state-run MENA news agency, Abdallah Ghorab claimed the long queues at refuelling points in Cairo and beyond are caused by disruptions in the distribution network that connects fuel depots with the country’s 3,000 petrol stations. Ghorab also called on the government to revise the amount it budgets for fuel subsidies, saying part of the current sum could be used for another sector such as education or health. The amount spent on fuel subsidies will fall to LE70 billion in 2012/13 from LE95 billion in the current fiscal year, and make up 48 per cent of Egypt’s total subsidies bill.

Egypt’s Muslim Brotherhood has drawn up a strongly free-market economic plan and pledges to move fast to negotiate a loan from the International Monetary Fund (IMF) if it forms a government after this month’s presidential election. Rivals portray the Brotherhood as a nebulous organisation obsessed with religion, but its wide-ranging plan, details of which were revealed during the build-up to last month’s first-round presidential vote, projects a pragmatism that puts rapid economic growth ahead of ideology. Khairat El-Shater says the sorry state of Egypt’s economy and the government’s heavy debts, which he put at LE1,140 billion ($189 billion), gave the country little choice but to rely on private companies and investors.