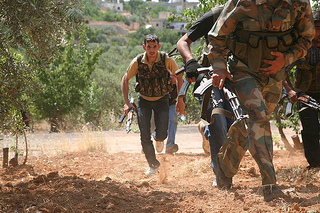 Syrian forces and their Lebanese Hezbollah allies seized control of the border town of Qusayr on Wednesday after a rapid overnight offensive, dealing a strategic defeat to rebel fighters.

Morsi spokesperson: Ethiopia has not complained over dam comments
A presidential spokesperson denied reports that Ethiopia filed a complaint with the UN Security Council over comments made at meeting with President Mohamed Morsi on Ethiopia’s Renaissance Dam. [Ahram Online, Ahram Online]

Blue Nile dam row drives Egypt stocks down
Egypt’s main index fell by 1.57 percent on Tuesday to 5,222 points, one day after a meeting convened by the Presidency stoked investors’ fears regarding Egypt’s access to Nile water. Last week, Ethiopia began diverting the flow of the Blue Nile ahead of construction of its planned Renaissance Dam project—a move that rattled Egyptian fears of the project’s impact on Egypt’s water supply. [Ahram Online]

Norway on the Mediterranean – Ralph Chami, IMF
On the occasion of the release of its first report on Libya post-revolution, The IMF’s Ralph Chami expressed optimism that the country has the potential to become the new Norway given its hydrocarbon wealth and “first class economy.” Central Bank Governor Saddek Elkaber said Libya must carry out reforms to open up the economy to investors. [Libya Herald, Libya Herald]

Media agreement signed with Deutsche Welle
Congress has signed a Memorandum of Understanding (MOU) with German international broadcaster Deutsche Welle’s DW Akademie to enable collaboration with public and private sector broadcasters in Libya. The MOU is also expected to strengthen cooperation in training and developing the Libyan media as well as helping to create a media law and strategic planning. [Libya Herald]

No decision on Mangoush
Rumors that the General National Congress decided today to replace Chief of Staff Major-General Yousef Mangoush are untrue, according to members of the legislature. Seven members of the Defense Committee voted on May 7 in favor of replacing Mangoush, saying he was unable to rebuild the Libyan army. The deadline for replacement candidates to submit applications is Friday, after which the committee will evaluate who is qualified and whether they meet Political Isolation Law requirements. [Libya Herald]

Syria rebels say they have lost battle for Qusayr
Syrian forces and their Lebanese Hezbollah allies seized control of the border town of Qusayr on Wednesday after a rapid overnight offensive, dealing a strategic defeat to rebel fighters.  Outgunned rebels said they had retreated from Qusayr, which lies on a vital cross-border supply route with Lebanon, after two weeks of fierce battles that marked the Shia Hezbollah group’s deepest involvement yet in Syria’s civil war. The Syrian army vowed on Wednesday to trounce rebel fighters across the country, while the opposition promised to carry on the fight.  [Reuters, NOW]

France, Britain confirm use of sarin gas in Syria
Journalists from France’s Le Monde newspaper handed over samples of blood, urine, and hair from sickened rebel fighters to the French government, which on Tuesday said they found traces of the nerve agent sarin, the first tangible proof of chemical weapons use by the Syrian government. Britain also said Wednesday that physiological samples from Syria had tested positive for sarin gas. [Daily Star]

Gunmen Attack Convoy of Syrian Cargo Trucks in Iraq
A convoy of four Syrian trucks loaded with highly flammable material was attacked 310 miles from Baghdad on June 2. The attack raises questions about the kind of help that Baghdad is providing Syrian President Bashar al-Assad’s regime, which an armed opposition has been trying to topple for more than two years. [Al Monitor]

Tunisia’s Hezbollah changes name to obtain license
Tunisia’s Ministry of Interior last month rejected the legal license for Hezbollah on the grounds that it contradicted democratic values and sought to establish a caliphate. Nevertheless, party leader Seifeddine Laajili is determined to win approval and obtain a license. [All Africa]

Femen leader deported; Two trials underway
Tunisian police detained a Ukrainian Femen activist in the capital Tunis before expelling her on Tuesday. Three others face jail terms of up to a year. They are charged with indecency and an attack on public morals after staging a topless protest last week outside the main courthouse in Tunis. [Al-Arabiya/AFP, Tunisia Live]

Groups denied protest permits defy Ministry of Interior
The Ministry of the Interior has been withholding permission from certain groups to organize protests or meetings because they are not legally registered with the government, a policy which the organizations in quest have criticized and defied. [Tunisia Live]

Public prosecutor objects to release of youth activists arrested in 2011
The public prosecutor objected to the release of two activists arrested in 2011, as two thousand protesters demonstrated in front of his house. Nineteen  detainees went on a hunger strike two weeks ago. According to a lawyer involved in the case, the other detainees are expected to be released. Meanwhile, Human Rights Minister Hooria Mashhoor suspended her work in the government until their release. [Al Masdar, Al Masdar]

NDC members hold vigil to demand women’s quota
Members of the National Dialogue Conference (NDC) held a vigil on Tuesday to demand the reconsideration of proportional women’s representation in the Conciliation Committee according to the regulations of the Conference. [SABA]

Arrangements for Russian trade delegation to Yemen reviewed
Minister of Planning and International Cooperation Mohammed al-Sa’adi discussed with Russian Ambassador to Yemen Sergei Koslov arrangements for an imminent visit of a Russian commercial delegation to Yemen this month. The Russian delegation aims to get acquainted with investment opportunities in the country and to strengthen cooperation frameworks between the private sectors in both Yemen and Russia. [SABA]