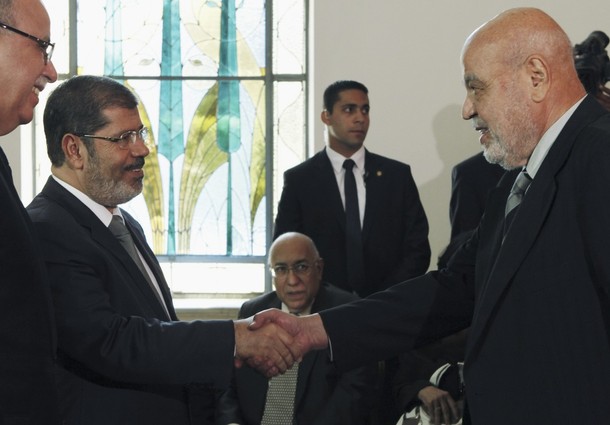 A judicial source at the Supreme Constitutional Court (SCC) rejected the idea of merging judicial bodies coupled with the abolition of the SCC, asserting that this is not permissible in any way and that each competent body considers the issues that fit its mandate. The source added that the SCC has the duty to interpret laws, regulations, and compliance with constitutional limitations on their provisions.

[Ahram Online, Shorouk (Arabic), 8/16/2012] Recently appointed justice minister Ahmed Mekki on Wednesday denied making any statements to the press since he took up his post in relation to the High Constitutional Court (HCC), its rulings or judges. The Minister of Justice made statements suggesting the HCC should postpone the case regarding the dissolution of parliament. Mekki however denied making such statements, saying he abstains from commenting on these issues.

[Youm7 (Arabic), Shorouk (Arabic), 8/16/2012] A judicial source at the Supreme Constitutional Court (SCC) rejected the idea of merging judicial bodies coupled with the abolition of the SCC, asserting that this is not permissible in any way and that each competent body considers the issues that fit its mandate. The source added that the SCC has the duty to interpret laws, regulations, and compliance with constitutional limitations on their provisions. Minister of Justice Ahmed Mekki put forth the idea of unifying the State Litigation Authority and the Administrative Prosecution with other judicial bodies and eliminating the Constitutional Court, stirring controversy with judges who reject this idea. President Morsi met today with the Supreme Judicial Council and the heads of judicial bodies to discuss issues related to the justice system.

Try them campaign: No safe exits for military junta

[Daily News Egypt, Shorouk (Arabic), 8/16/2012] A new campaign called “No Safe Exits” was launched on Tuesday in response to President Mohamed Morsy’s decision on Sunday to sack and honor former Commander-in-Chief Hussein Tantawi and  former Chief of Staff Sami Anan who were awarded Egypt’s top state honors, the Order of the Nile and the Order of the Republic, respectively, earlier this week. “No Safe Exits” was established by the “Try Them” campaign which refuses the safe exit of the “military criminals” and demands their trials for serving the regime before the revolution and the killings they have caused after the revolution. The April 6th Movement has also stated that they would also demand trials for Tantawi and Annan.

[Ahram Online, Egypt Independent, Al Masry Al Youm (Arabic), Shorouk (Arabic), 8/16/2012] Sheikh Hashem Islam, a member of the Fatwas (religious edicts) Committee of Egypt’s highest Islamic authority, Al-Azhar, has preached that confronting those who plan to hit the streets 24 August to protest against the Muslim Brotherhood and President Mohamed Morsi may not be punishable. “I say stand up against them. If they fight you, fight them back … if they kill some of you, the victims will go to heaven, and if you kill them, that would be righteous." Sheikh Hashem later retracted his statements after a barrage of criticism from prominent Muslim, Christian, secular, and liberal figures.

[Egypt Independent, 8/16/2012] Several journalists continued their sit-in for the seventh consecutive day on Wednesday, protesting the recent appointment of new chief editors of state-owned newspapers by the Shura Council. Journalists from state-owned daily Al-Ahram on Wednesday staged a vigil against the appointment of Nasser Salama as their chief editor, whom they consider a symbol of the former regime. The journalists demanded that chief editors be elected, not selected by parliamentarians. The Egyptian Organization for Human Rights on Wednesday issued a report on the status of the freedom of the press and media since the breakout of the 25 January revolution.

[Egypt Independent, Shorouk (Arabic), 8/16/2012] Israeli security forces have not found any trace of Grad rockets being fired at Eilat, after two explosions were heard in the southern resort city Wednesday evening, DPA has reported Israeli police as saying. An Egyptian security source on Thursday denied Israeli media reports that the reported missiles came from Sinai. The source stressed that it would be impossible for a rocket to be fired, especially since the Armed Forces has now increased its presence at Sinai’s border with the Gaza Strip and Israel.

[Ahram Online, 8/16/2012] Egypt’s government is preparing a brand new economic programme which it will present to the International Monetary Fund (IMF) as part of negotiations for a loan, an economic adviser to President Morsi has told Ahram Online. The country has been in discussions with the IMF since June 2011 regarding a $3.2 billion fiscal support package. On Tuesday, Egypt’s finance minister said the value of the loan could rise to $4.8 billion.

[Ahram Online, 8/16/2012] Eighty-two Egyptian nationals that had been jailed in Saudi Arabia were granted pardons by Saudi King Abdullah on Wednesday in a Ramadan amnesty. Saudi ambassador to Egypt Ahmed Qattan has stated that Egypt’s foreign ministry would soon be provided with the names of those released. Notably, there was no news about the release – or lack thereof – of Egyptian lawyer Ahmed El-Gizawi. El-Gizawi’s case has been adjourned by a Saudi court until 5 September.

Morsi calls on Turkish President to visit Egypt in December

[Shorouk (Arabic), 8/16/2012] A statement by the Turkish Embassy said that President Gul accepted an invitation from President Mohamed Morsi, during their participation in the Organization of the Islamic Conference summit hosted by Mecca. The statement added that the Turkish President did not want to miss the opportunity to hold the first direct meeting face to face with President Morsi, who became the first ruler of Egypt after free and transparent elections.