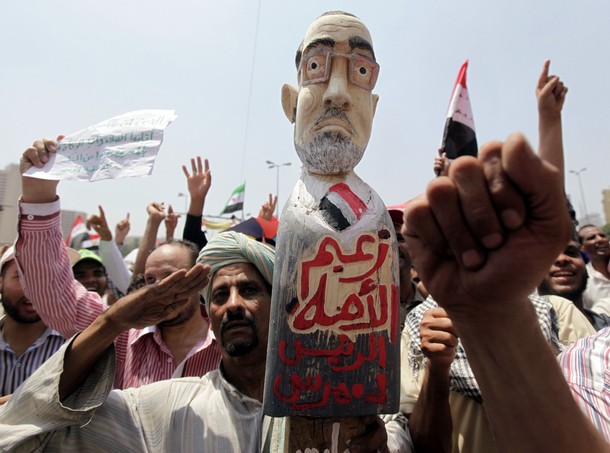 Sheikh Mazhar Shaheen, the "revolutionary" imam  of Omar Makram mosque, has called on the judiciary not to "abort the revolution" by defying President Mohamed Morsi during his Friday prayer speech to thousands of protesters gathered on Tahrir Square in support of Morsi’s 8 July decree reinstating parliament. The "Friday of Endurance" demonstration was called for by the Muslim Brotherhood’s Freedom and Justice Party and the Salafist Nour Party.

[Egypt Independent, 7/12/2012] The Constituent Assembly tasked with writing Egypt’s new constitution finished drafting its first article on Wednesday, which now states: “The Arab Republic of Egypt is a democratic, consultative, constitutional and modern state based on the separation of powers and the principle of citizenship.” The article adds that, “Egypt is part of the Arab and Islamic nation, bound to the African continent with strong ties.” The president is head of the armed forces and has the right to appoint the defense minister, and the military’s budget will remain private, only to be reviewed by Parliament in closed sessions, the assembly members agreed. Finally, they agreed that the president will be able to declare war only with the approval of the armed forces and Parliament.

[Al Masry Al Youm (Arabic), Egypt Independent, 7/13/2012] The Salafi Nour Party desires at least three ministries in the new government to be formed within days, London-based Asharq Al-Awsat newspaper reported Friday. “The party suggested people it trusts to be efficient in government, aiming at securing three or four ministries,” the newspaper quoted party spokesperson Nader Bakkar as saying. Al Sharq Al Awsat reported a meeting between party leaders and US Ambassador to Egypt Anne Patterson on Thursday discussed the role of the party in the formation of the new government seeking information on the party’s vision for the coming period, the relationship between the president and the military council, and foreign investments in Egypt.

[Al Shorouk (Arabic), Egypt Independent, 7/12/2012] A fact-finding committee formed by President Mohamed Morsy to investigate detentions made since the January 2011 uprising has said it was informed by military judges and Interior Ministry officials that civilian and military prisons are no longer holding detainees who were arrested in connection with protests and clashes over the last year and a half. In its second statement, of which Al-Masry Al-Youm obtained a copy, the committee said it received on Wednesday a notification from the military judiciary saying that the total number of detainees charged in military cases between January 2011 and 30 June 2012 was 11,879; 9,714 of whom were acquitted. President Morsy has promised retrials for those accused of killing protesters after senior security officials were acquitted of these charges in June while Mubarak and former Interior Minister Habib al-Adly each were sentenced to life in prison.

[Youm7 (Arabic), Ahram Online, 7/13/2012] Sheikh Mazhar Shaheen, the "revolutionary" imam  of Omar Makram mosque, has called on the judiciary not to "abort the revolution" by defying President Mohamed Morsi during his Friday prayer speech to thousands of protesters gathered on Tahrir Square in support of Morsi’s 8 July decree reinstating parliament. The "Friday of Endurance" demonstration was called for by the Muslim Brotherhood’s Freedom and Justice Party and the Salafist Nour Party, who hold the majority of seats in the beleaguered legislative body, together with revolutionary group April 6 Youth Movement, after the High Constitutional Court (HCC) rejected the presidential decree on Tuesday.

[Al Shorouk (Arabic), 7/13/2012] The Maspero Youth movement called on all national and political forces to assemble at the US embassy on Saturday in rejection of US Secretary of State Hillary Clinton’s visit to Egypt. In a statement issued Friday, the group accused the US of continued interference infringing on Egyptian sovereignty and an alliance with the Muslim Brotherhood that supports Morsi’s presidency and reinstatement of the People’s Assembly in exchange for continued influence.

[Reuters, 7/13/2012] Morsy, whose Brotherhood was repressed under the rule of military men, wants to whittle away at the might of the Supreme Council of the Armed Forces and the sweeping economic interests they control. But he must also address demands of an electorate desperate for jobs and security after exhausting uncertainty since Hosni Mubarak was toppled by street power in February last year. "Confronting the SCAF and improving the economy don’t always go together. Sometimes you have to make a choice to prioritize one over the other," said Hamid.

[Ahram Online, 7/13/2012] Egyptian President Mohamed Morsi and his Tunisian counterpart Moncef Marzouki "do not accept military intervention in Syria" as means to end the 16-month bloody uprising in the war-torn country, the Egyptian president told media after meeting with Marzouki in Cairo, Friday. "We fully support the Syrian people’s revolution, we should work to stop the bloodbath in Syria but using force is not the solution," Morsi affirmed. Today’s discussions marked the opening meeting between the region’s first two presidents to be elected post-Arab Spring. Morsi and Marzouki discussed the future of the Egyptian-Tunisian relations and political developments across the Middle East region.

[Egypt Independent, 7/12/2012] The head of the Coptic Church Millet Council’s information council said on Thursday that the church is prepared to accompany President Mohamed Morsy on his tour of Ethiopia to discuss Nile water allocation if asked to do so. President Mohamed Morsy will visit Addis Ababa, the capital of Ethiopia, as the head of Egypt’s delegation at the African Summit on 15 and 16 July. Ethiopia began work on the Grand Ethiopian Renaissance Dam, which Egypt claims may reduce its quota of Nile water. Prior to his death, the Coptic Church’s leader Pope Shenouda III was working closely with members of the Ethiopian church to address this issue.

[AFP, 7/13/2012] Israeli border police killed one man and wounded another when the two tried to cross the Egyptian border into Israel, the army said on Friday. "Overnight, Israeli border police identified two suspects infiltrating Israel through the Israel-Egypt border," an army spokesman said, without saying whether the two were suspected to be militants or illegal immigrants.