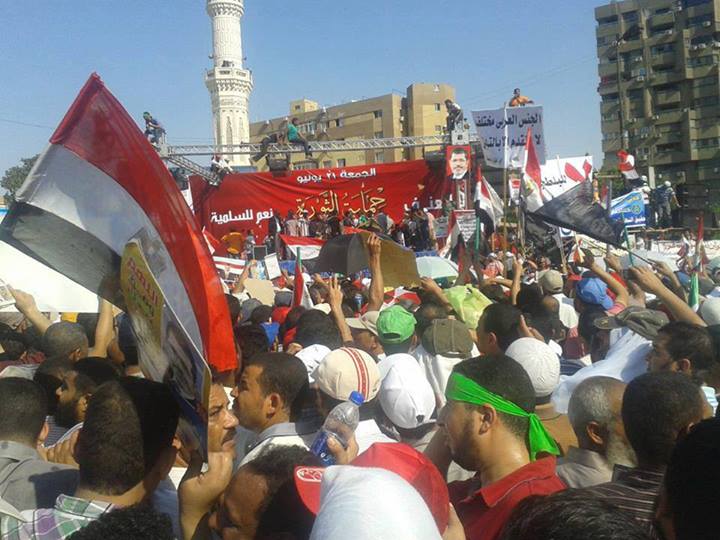 Thousands of Islamist supporters of Egypt’s President Mohamed Morsi gathered in Cairo after Friday prayers to show support for the elected head of state ahead of protests his opponents hope can force him from office. The pro-Morsi rallies, which were organized under the banner of ‘denouncing violence,’ come ahead of planned anti-Morsi protests on June 30.

Presidency considers initiatives to calm political crisis
Egypt’s defense and interior ministers have turned down a proposal by President Mohamed Morsi to prepare security forces for a possible declaration of a state of emergency should planned 30 June anti-government demonstrations turn violent, government sources told Ahram Online on Thursday. Ayman Ali, a presidential advisor, said that the presidency is also considering initiatives proposed by political forces to calm the current crisis, as well as prevent violence from breaking out. Morsi has met with the Wasat Party, which proposed an initiative, the Construction and Development Party, as well as al-Azhar’s Grand Sheikh Ahmed al-Tayyeb, and Coptic Orthodox Pope Tawadros II. [Ahram Online, Ahram (Arabic), 6/21/2013]

Presidency launches online campaign to defend first year
The Presidency announced Thursday evening the launch of a new campaign, known as “Morsi’s First Year,” aimed at promoting President Mohamed Morsi’s first year in tenure. The campaign launched via a website and social media outlets such as Twitter and Facebook is aimed at documenting the President’s perceived successes and obstacles. According to Morsi’s new campaign, there have been “more than 50 smear campaigns against the president” and “5821 demonstrations and clashes” since he first took office. Achievements listed on the site included increasing Egypt’s GDP from 1.8 to 2.4, and increasing total investments from 4 to 9 billion Egyptian Pounds, while 9.1 million workers are said to have benefited from an increase in minimum wage. [DNE, EGYNews (Arabic), 6/21/2013]

Court upholds decision to release Mubarak in illicit gains case
A Cairo criminal court rejected the prosecution’s appeal against a decision to release former president Hosni Mubarak who had been detained on charges of illicit gains. The court upheld the decision to release Mubarak and said it cannot continue to detain him based on a technical report by the Illicit Gains Authority. Mubarak will, however, remain in prison as he is detained on other charges. Meanwhile, authorities in Egypt have valued the wealth of former dictator Hosni Mubarak, his wife and their two sons at nine billion Egyptian pounds ($1.2 billion, 900 million Euros), Mahmoud al-Hefnawy from the prosecutor general’s technical office said Thursday. Mubarak, his wife Susan Thabet, his sons Alaa and Gamal and their wives Heidi Rasekh and Khadiga al-Gammal all contributed to the figure, Hefnawy claimed, according to confirmed reports from the Administrative Control Authority, the Illicit Gains Authority and the Central Auditing Organization. [Aswat Masriya, Ahram Online, AFP, Egypt Independent, 6/21/2013]

IMF points to progress in aid talks with Egypt
The International Monetary Fund (IMF) said Thursday it was making progress in talks with Egyptian authorities on a potential loan but that technical issues such as subsidies remain. “Our work with the Egyptians is producing increased understanding on many of the remaining issues,” IMF spokesman Gerry Rice said. The spokesman, speaking at a regularly scheduled news conference, said that the IMF was working “constructively” with the authorities with the hope of a swift conclusion of loan negotiations. [DNE, 6/21/2013]

Egyptian central bank leaves key interest rates unchanged
The Central Bank of Egypt (CBE)’s monetary policy committee on Thursday maintained key lending and deposit rates unchanged at 10.75 and 9.75 percent respectively. In March, the CBE raised lending and deposit rates by fifty basis points each in the first such move since November 2011. On Thursday, the bank also maintained its discount rate and weekly repurchase agreement (repo) rate at 10.25 percent. Egypt’s urban inflation rate declined by 0.2 percent in May on the previous month. However, the country’s annual urban inflation rate rose to 8.2 percent in May, reaching 133.6 points due to rising transportation costs (up 3.4 percent) and rising costs for vegetables (up 5.6 percent). [Ahram Online, 6/20/2013]

Clashes between protesters break out in Alexandria; Hundreds of MB members hurt in Nile Delta clashes
Clashes broke out in the coastal city of Alexandria on Friday between supporters and opponents of President Mohamed Morsi. According to al-Ahram’s Arabic news website, the clashes erupted when an anti-Morsi march confronted a group of Muslim Brotherhood supporters in front of the iconic al-Qaed Ibrahim mosque following Friday prayers. No official figures for those injured have been released so far. In Cairo, CBC reporters were attacked and kicked out of Friday’s pro-Morsi, anti-violence rally. Meanwhile, FJP Secretary-General Mohamed al-Heleisy announced Thursday that at least 357 members of the Muslim Brotherhood and its Freedom and Justice Party (FJP) have been injured in recent clashes with political opponents in the city of Dosouq in Egypt’s Kafr al-Sheikh governorate, According to al-Heleisy, six injuries were the result of gunshots and ninety of birdshot, in addition to eight-seven injuries from bladed weapons and seventy-six by blunt instruments. [Ahram Online, Shorouk (Arabic), AMAY (Arabic), 6/21/2013]

Thousands rally for ‘legitimate’ Morsi in ‘No to Violence’ rally in Cairo
Thousands of Islamist supporters of Egypt’s President Mohamed Morsi gathered in Cairo after Friday prayers to show support for the elected head of state ahead of protests his opponents hope can force him from office. The pro-Morsi rallies, which were organized under the banner of ‘denouncing violence,’ come ahead of planned anti-Morsi protests on June 30. Demonstrators, some of which were bused in from Fayoum and Gharbiya, were waving national flags or holding banners in support of the president, chanted ‘Islam is the solution’ and ‘the Qu’ran is the constitution,’ as well as calling for the arrest of opposition members. Over thirty Islamist groups announced their participation in the protest, but the Salafi Call said it would not take part in order to avoid a ‘political provocation.’ At the protest, the pro-Morsi campaign, Tagarod (impartiality), continued to collect signatures in support of the president. They announced that 11 million signatures have been collected. [Reuters, AP, Ahram Online, Aswat Masriya, DNE, Egypt Independent, EGYNews, 6/21/2013]

Tamarod considers UN supervision as signatures counted
The opposition Tamarod campaign is considering the possibility of inviting a United Nations (UN) mission to oversee counting signatures for its anti-government petition, campaign spokesperson Mahmoud Badr has said. The campaign is currently in discussions with Egypt’s Foreign Ministry, he added. Badr said the new initiative would ensure no petition forms were forged. Meanwhile, Egypt’s April 6 Youth Movement on Thursday announced that it had collected more than 1,068,350 signatures against President Mohamed Morsi and launched a new campaign to motivate the public to demonstrate on June 30, al-Ahram’s Arabic-language website reported on Thursday. [Egypt Independent, Ahram Online, 6/20/2013]

Protests against governors, Morsi, continue across Egypt
Hundreds of demonstrators in Suez and Port Said took part in marches calling for ousting President Mohamed Morsi on Friday. A group of protesters marched from al-Tawfiqi Mosque in Port Said holding anti-Muslim Brotherhood banners and demanding that the president steps down before June 30. In Suez, scores of opponents to Morsi’s regime organized a protest in al-Arba’een Square to demand toppling the president. In Cairo, dozens of protesters gathered in front of Morsi’s house on Friday morning, denouncing what they described as the president’s failure to obtain justice for slain protesters. The protest was attended by several mothers of those slain during the 2011 revolution, who chanted against the president and prayed. In Gharbiya, demonstrators besieged the Basyoun local council building in protest against the appointment of a new Muslim Brotherhood governor. The news marks the fifth day of protests against Ahmed al-Beyaly, a member of Egypt’s Muslim Brotherhood, taking up the position. In Luxor, hundreds of protesters have continued their demonstration in front of the governorate headquarters for a fourth consecutive day, provoked by the appointment of Adel al-Khayat, a founding member of Egypt’s ultraconservative al-Jama’a al-Islamiya group, as governor. [Aswat Masriya, Ahram Online, Shorouk (Arabic), Egypt Independent, ONA (Arabic), 6/21/2013]

Also of Interest:
Foreigners leaving Egypt in run up to June 30 | Shorouk (Arabic)

US envoy under fire for criticizing Egypt protests
The US ambassador to Egypt is under fire from opposition groups who were angered by her criticism this week of planned mass rallies against the ruling Muslim Brotherhood. Anne Patterson responded to widespread talk among Egyptian liberals that Washington had thrown its weight behind Islamist President Mohamed Morsi by saying in a speech on Tuesday that the United States was working closely with the elected government and also listening to all Egypt’s political groups. But by Thursday, after extensive local media coverage of her remarks and condemnation by opposition leaders of "interference" in Egypt’s internal affairs, social media was dominated by angry and hostile comments directed toward Patterson and her embassy. Meanwhile, reports emerged that the Cabinet has instructed ministers and governors not to communicate directly with the US embassy regarding economic aid to Egypt, but rather to limit any communication to USAID. When asked by Shorouk to comment, the US embassy declined to give a statement. [Reuters, DNE, Shorouk (Arabic), 6/21/2013]

Egyptian foreign minister heads to Doha meeting on Syria
Egyptian Foreign Minister Mohamed Kamel Amr will head to Doha on Friday to participate in a ministerial meeting for countries supporting the Syrian rebels, foreign ministry spokesman Badr Abdel Ati announced on Thursday. According to Abdel Ati, the meeting will discuss the recent developments in Syria, and seek to develop a common vision for a solution. [Ahram Online, 6/20/2013]