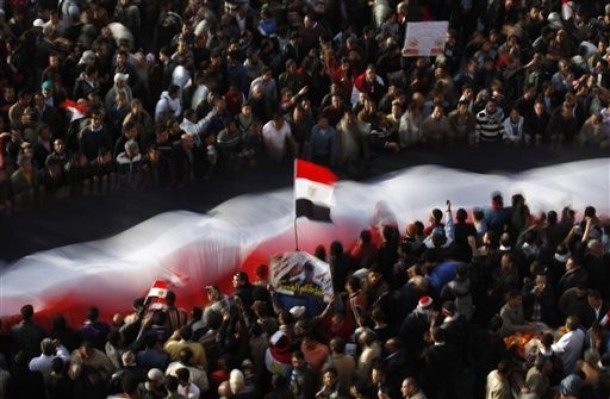 Security forces and military personnel are noticeably absent from Tahrir as tens of thousands pack the square on January 25 for celebrations and demonstrations commemorating the anniversary of the revolution.

1) Security forces and military personnel are noticeably absent from Tahrir as tens of thousands pack the square on January 25 for celebrations and demonstrations commemorating the anniversary of the revolution.  The square’s entrances are being secured by popular committees, whose constituents consist mainly of Muslim Brotherhood members. At least five major podiums have been erected around the square and nearby locations including Omar Makram Mosque and Qasr El-Nil Bridge. Protesters are convening in other locations around the city and in other governorates. The stage at Omar Makram Mosque has become a platform for around 30 political groups, including the Democratic Front, the April 6 Youth Movement and the Revolutionary Socialists, and the Wafd Party has built its own stage. Several marches originating in other parts of the city are converging on Tahrir Square. Protesters are changing slogans demanding retribution for the victims of the revolution, “bread, freedom and justice,” and condemning Mubarak’s trial proceedings as “farcical.” Presidential candidates Amr Mousa and Abdel Moneim Aboul Fotouh are among the thousands marching toward Tahrir. [al-Ahram, English, 1/25/2012]

2) Tens of Al-Azhar sheikhs arrived in Tahrir Square around 10 p.m. on January 24, holding photos of Emad Effat, the cleric killed during the cabinet clashes in December. The clerics chanted "We’re free revolutionaries and we’ll carry on our course." Al-Azhar’s Grand Sheikh, Aymed Tayyeb, gave a speech from the square emphasizing the need for new institutions and documents constructed in “a spirit of consensus” and urged Egyptians to work toward compromise and unity among all social and political groups. [al-Masry al-Youm, Arabic, 1/25/2012]

3) On January 24, new fortifications were added to the Maspero state television building, which was surrounded by barbed wire and armed soldiers and was expected to be a rallying point for protesters. Some high-end hotels in the city were boarding up their windows in expectation of violent clashes, and several airlines cancelled flights to Egypt on the anniversary. The US embassy has warned its citizens to steer clear of the centre of the capital. [The Guardian, English, 1/24/2012]

4) Field Marshal Tantawi announced on state television on January 24 that the state of emergency would be partially lifted starting on the anniversary of the revolution, “except in cases involving thuggery,” an ill-defined category of crime that critics claim can be used to violate the legal rights of any citizen. The statement also affirmed the military’s commitment to relinquishing power in June and respect for Egypt’s international treaties. Tantawi’s decision does not amount to an abrogation of the emergency law, which remains on the books.  According to Hossam Bahgat, director of the Egyptian Initiative for Personal Rights, "Tantawi’s speech does nothing to deal with the most harmful aspect of the state of emergency, which is allowing the police to retain powers to stop, search and detain anyone they suspect of being a ‘thug’, without having to obtain a judicial warrant.” [Guardian, English, 1/25/2012] [al-Ahram, English, 1/25/2012]

6) The newly formed People’s Assembly issued a statement honoring the martyrs of the January 25 revolution and  affirming that the parliament will prioritize compensation and retribution for the victims, and hold the perpetrators legally accountable. Speaker of Parliament Saad al-Katatny said on January 25, “The revolution’s Parliament will … step forward until it achieves a power transition from the military council to an elected civil authority, Parliament, a government and president with complete powers, and achieves freedom, dignity and social justice for the people,” read the statement signed by Speaker Saad al-Katatny. [al-Masry al-Youm, English, 1/25/2012]

7) A group of bedouin tribesmen stormed a tourist resort in an effort to reclaim land. Egyptian media reports claimed that dozens of armed gunmen took control of Aqua Sun, a Red Sea hotel complex boasting a mile and a quarter of private beaches to the south of Taba, and were demanding a £425,000 ransom in exchange for leaving the site peacefully. The incident is the latest in a series of confrontations between state authorities and local communities seeking to capitalize on the current instability to redress longstanding grievances.  [Guardian, English, 1/25/2012]