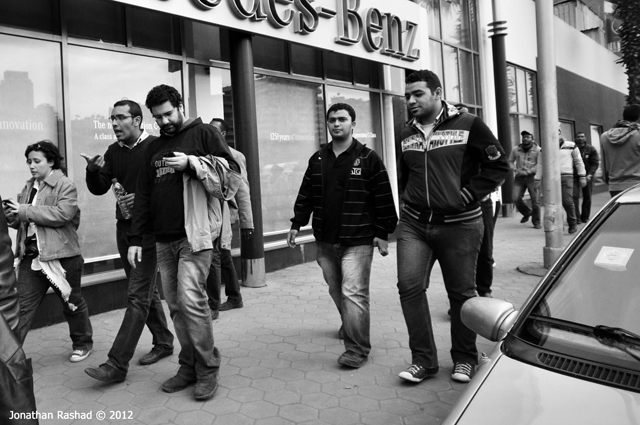 Egypt’s prosecutor general on Monday ordered the arrest of five prominent political activists accused of inciting violence against President Mohamed Morsi’s Muslim Brotherhood, a step the opposition decried as a reversal for democracy.

Egypt’s Morsi should head up new govt: Presidential advisor
A new government headed by President Mohamed Morsi is the solution to Egypt’s current political turmoil, Ahmed Omran, Morsi’s advisor for development issues, asserted in a Monday interview with Kuwaiti daily al-Jarida. Omran said that the current government of Prime Minister Hisham Qandil was "incapable" of taking the necessary economic and political steps needed to realize the goals of Egypt’s 25 January Revolution. He added that a new Morsi-led government could circumvent the inevitable differences that arise when ministerial portfolios are divided among different political groups. He also stressed that a cabinet reshuffle was necessary now, especially since parliamentary polls weren’t likely to begin before several months. [Ahram Online, SIS, 3/25/2013]

Shura Council approves Saudi loan, despite Salafi anger
Heated debate erupted again among the Shura Council’s Islamist lawmakers on Monday over a loan from Saudi Arabia. Salafi legislators condemn loans as a prohibited form of usury. The council ultimately approved the loan agreement for an irrigation and drainage pumps’ plants project between Egypt and the Saudi Fund for Development, despite objections from several members. MPs attacked Prime Minister Hisham Qandil’s Cabinet and described it as a “government of loans.” [Egypt Independent, 3/25/2013]

Top prosecutor summons activists over clashes, solidarity protests ensue
Egypt’s prosecutor general on Monday ordered the arrest of five prominent political activists accused of inciting violence against President Mohamed Morsi’s Muslim Brotherhood, a step the opposition decried as a reversal for democracy. Major anti-Brotherhood activist figures spoke out against the charges levied against them on Monday night, after the prosecutor general issued an official summons, arrest warrants and travel bans pursuant to investigations into charges that they were responsible for last week’s violent clashes in Moqattam. The prosecution listened on Monday to the testimony of a number of injured protesters from the Brotherhood who accused several opposition political figures of instigating the attacks. Protesters will gather at the High Court in Cairo on Tuesday in solidarity with the activists. [Egypt Independent, Reuters, AP, SIS, Ahram Online, Aswat Masriya, DNE, Ahram (Arabic), 3/26/2013]

Egypt’s court to sort out tug-of-war over prosecutor-general
Egypt’s Administrative Court is due to rule on Tuesday on a case against President Mohamed Morsi’s dismissal of Mubarak-era prosecutor-general Abdel-Meguid Mahmoud last November. The case seeks to revoke Morsi’s decision on the argument that the removal was unconstitutional, unlawful and had bypassed the judiciary. They also demand the removal of the Morsi-appointed successor, Talaat Abdullah. [Ahram Online, 3/26/2013]

New customs tariffs could bring in LE1 bln per year, says official
The government hopes to earn LE1 billion ($150 million) in revenues by increasing the custom tariffs on certain commodities, Customs Authority head Mohamed al-Salhawy said on Monday. President Mohamed Morsi announced on Sunday a rise in custom duties on luxury consumer goods like shrimps and other expensive commodities. Other commodities will see a drop in tariffs, while certain others will be exempt from duties altogether. The cost of these reductions has not yet been assessed, Salhawy said. [Egypt Independent, Ahram Online, 3/25/2013]

Egypt wheat stocks dwindle; no purchases planned until June
Egypt’s strategic stocks of imported and local wheat fell to just 2.207 million tons by March 13, enough to last just 89 days. "Traditional suppliers consider that Egypt is around 1 million tonnes behind in imports," said Fehmi Hannachi, head of commodity finance for Middle East and North Africa at ABC International Bank plc and board member of ABC Egypt. A Western diplomat in Cairo said the state grain buying agency, the General Authority for Supply Commodities (GASC) has nevertheless already signaled it will not buy wheat at open auction, at least until the fiscal year ends at the end of June. [Reuters/Ahram Online, 3/25/2013]

Egyptian kidnappers release Norwegian, Israeli tourists
Kidnappers released a Norwegian woman and an Israeli man held in Egypt’s Sinai Peninsula following negotiations mediated by Bedouin leaders between authorities and the group that seized the tourists four days ago, security sources said on Tuesday. The tourists had been kidnapped on Friday while driving between the resort towns of Dahab and Taba on the Red Sea coast. The sources said the kidnappers’ aim was to put pressure on Egyptian authorities to release two of their relatives held for alleged drug dealing. The police had agreed to review the case. [Reuters, AP, 3/26/2013]

Egypt press syndicate accuses presidency of ‘intimidating’ journalists
The syndicate issued a statement Monday accusing the presidency of launching a campaign of "intimidation and incitement" against journalists. The syndicate’s statement comes amid ongoing protests against perceived anti-Islamist media bias outside Cairo’s Media Production City (MPC), where numerous media outlets are based. The syndicate pointed to remarks made by President Mohamed Morsi following violent clashes in Moqattam on Friday. The National Association for Change on Monday expressed its frustration at the precarious escalation in threats and incitement of the president and the Muslim Brotherhood against opposition leaders and journalists. [Ahram Online, DNE, Aswat Masriya, 3/25/2013]

Badie slams protests ‘targeting state institutions’
The Muslim Brotherhood’s Supreme Guide on Tuesday slammed recent protests that took place in front of various state institutions, many of which devolved into violent clashes. In a statement on his Facebook page, Mohamed Badie said, “Many have been trying to drag the country to the catastrophes and civil wars they had warned of, [that is] by assaulting the office of the head of the state during consecutive Friday protests outside the Ettehadiya Presidential Palace, then targeting state institutions.” [Egypt Independent, 3/26/2013]

EU’s Ashton to discuss democratic transition during Cairo visit
Catherine Ashton, the European Union foreign policy chief, is planning to discuss the renewal of Egyptian-European political dialogue during her upcoming trip to the country, a diplomatic source from the Foreign Ministry said on Monday. Ashton, who is due in Cairo on 6 April, earlier expressed concern over reports of violence that renewed in Cairo and the atmosphere of local instability. In statements reported by the state-run news outlet MENA, the source added that Ashton would also consider methods of implementing the package of grants and loans allocated by the EU to Egypt during a cooperative meeting in Cairo. [Egypt Independent, 3/25/2013]

Washington urges Egypt to respect human rights
The US state department has expressed concern over violence that has swept Egypt since the 2011 uprising that toppled Hosni Mubarak, asking the Middle East’s most populous country to respect human rights and the law. US State Department Spokesman Patrick Ventral told a press conference on Monday that Egypt must guarantee standard rights, urging the authorities to take steps and conduct investigations through credible and independent means. [Aswat Masriya, State Department Press Briefing, 3/26/2013]

Qatar calls on Arabs to support Egypt economy
The emir of Qatar has called on Arab states to offer economic support to Egypt and other ‘Arab Spring’ countries. "Nobody can forget the sacrifices Egypt has made for all the Arabs," Hamad bin Khalifa al-Thani said during a speech at the Arab League summit in Doha on Tuesday. Qatar was one of the biggest economic supporters of Egypt in the wake of the revolution, having deposited $2 billion in the Central Bank since then. [Ahram Online, Egypt Independent, 3/26/2013]