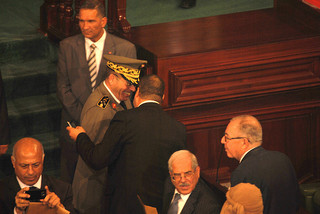 Court orders Morsi to reveal details of 2011 police abduction in Sinai
An administrative court on Tuesday ordered President Mohamed Morsi, the prime minister, minister of interior, minister of defense, and the head of the Egyptian general intelligence to disclose the circumstances of the abduction of four police personnel in the Sinai Peninsula on February 4 2011. [Ahram Online, 6/25/2013]

Islamists call for million-man demonstration next Friday
Several Islamist parties and groups including the Muslim Brotherhood and its Freedom and Justice Party have called for a million-man demonstration entitled "Legitimacy is a Red Line" next Friday. A statement released by the Alliance of Islamic Parties blamed ongoing bloodshed and violence throughout the country on “militias of the covert counter-revolution of the Tamarod movement, the National Salvation Front, and the Popular Current.” [Aswat Masriya, Daily News Egypt, 6/24/2013]

US embassy in Egypt condemns Sunday mob killing of Shias
The US embassy in Cairo has condemned Sunday’s mob killing of four Shia Muslims in a Giza village, which has stoked fears of worsening sectarian friction in Egypt. "We call on the Egyptian government to follow through on its pledge to ensure that the perpetrators of this heinous crime are held accountable under the law, and we urge a thorough and transparent investigation," read an embassy statement released Monday. [Ahram Online, US Embassy, 6/24/2013]

Gunmen kill six Libyan soldiers at checkpoint near Sirte
Six Libyan soldiers were killed in an attack by unidentified gunmen on an army checkpoint south of the coastal city of Sirte, once a stronghold of slain leader Muammar Qaddafi, a Libyan security source said on Tuesday. There was no immediate word on who was behind the attack. [Reuters, 6/25/13]

GNC agrees on new body to shake up bureaucracy
The General National Congress (GNC) has approved a new body designed to cut through red tape and improve the performance of the country’s ponderous bureaucracy. The Administrative Control Authority, reporting directly to the GNC, has been empowered to oversee the bureaucracy, but it is not yet clear how sweeping those powers will be or whether they will be able to exercise those powers without prior reference to the GNC. [Libya Herald, 6/24/13]

Libya looking at new hydrocarbon law, says NOC official
Libya is working on a new hydrocarbon law with better contractual terms and that will cover unconventional sources, said a top official of the National Oil Company, as part of the process to entice investors into the North African country following a civil war. [Zawya Dow Jones, 6/25/13]

Libyan rail authority meets Chinese corporation about restarting projects
The Libya Rail Implementation Authority and the China Railway Construction Corporation (CRCC) have met to discuss ways to reactivate stalled rail projects. The Chinese company has contracts to build various lengths of the railway from Tripoli to the Tunisian border. Libya’s $12 billion railway scheme was split between Russian Railways (RZhD), tasked with building the line between Sirte and Benghazi, and the CRCC. [Libya Herald, 6/22/13]

Brahimi sees Syria talks delay, appeals to big powers
International mediator Lakhdar Brahimi said on Tuesday that a conference on ending the war in Syria was unlikely to take place in July as he had hoped, and called on the United States and Russia to help contain the conflict. Brahimi was speaking to reporters in Geneva before holding talks with senior US and Russian officials, which he expected to be "constructive" but unlikely to resolve all questions linked to convening a conference on Syria’s future. [Reuters, 6/25/2013]

Saudi says "cannot be silent" on Iran, Hezbollah involvement in Syria
Saudi Arabia regards the involvement of Iran and Hezbollah in Syria’s civil war as dangerous and believes the rebels must be offered military aid to defend themselves, the kingdom’s foreign minister said on Tuesday.  Speaking at a news conference with US Secretary John Kerry in Jeddah, Prince Saud al-Faisal added that Saudi Arabia "cannot be silent" about Iranian intervention and called for a resolution to ban arms flows to the Syrian government. [Daily Star, 6/25/2013]

Syria battles rage in Damascus, Aleppo
Fierce battles raged on the edges of Damascus Tuesday as the army pressed a major assault to crush rebels around the capital, the Syrian Observatory for Human Rights said. Additionally, in the contested city of Aleppo in the country’s north, rebels attempted to advance into western regime-held districts, sparking clashes with government forces. [NOW, 6/25/2013]

Proposed bill toughens penalty for assaulting police
Police in Tunisia are voicing strong support for a bill that would toughen penalties for attacks on security forces. But the proposed legislation, stipulates penalties ranging between 3,000 dinars and three years in prison for "anyone assaulting policemen either by sign or defamation,” has revived fears among civil society groups of a return to repression. [All Africa, 6/24/2013]

Yemen’s Aden refinery seeks 600,000 tons  of high sulphur gasoil for July to September
Yemen’s Aden refinery is seeking 600,000 tons of high sulphur gasoil for delivery over July to September in a new short-term contract that closes later this week, industry sources said on Tuesday. The volumes are 37 percent lower than its term requirement for March to June, one of the sources said. The drop may signal that Yemen is able to meet more of its own refined oil needs this year compared with 2012. [Reuters, 6/25/2013]

Yemen’s remittances hit by Saudi labor crackdown
Tens of thousands of Yemeni workers left Saudi Arabia and thousands more are expected to depart in the coming weeks ahead of a planned crackdown on illegally registered expatriates in the kingdom, a Yemeni official said. The exodus could further worsen Yemen’s already dismal economy, which leans on remittances from workers in oil-rich Gulf states, endangering the stability of a country seen by al-Qaeda as a new base. [Reuters, 6/24/2013]

EU Foreign Affairs Council expresses “serious concern” for Yemen’s transition
In a statement issued by the European Union (EU) Foreign Affairs Council after a meeting held in Luxembourg, “serious concern” was expressed over “all acts aimed at undermining, obstructing, or derailing the transition process and which take advantage of the transitional process for partisan ends, including boycotts of the NDC, and interference from inside or outside Yemen." [NDC, 6/24/2013]

NDC Conciliation Commission prepares for second plenary voting
The National Dialogue Conference released the following article discussing the voting mechanism for the end of the second plenary. Voting on any of the legal and constitutional issues presented by the working groups is expected to take place on June 30. [NDC, 6/23/2013]

In act of frustration, Moroccan dies after setting himself ablaze
Abdel Kabir al-Atawi, a Moroccan father of five, died after setting himself on fire in protest of being refused an administrative document he needed to get treatment for his sick wife. Moroccan Arabic news websites, which first reported the story, said Atawi staged his dramatic protest out of frustration at the behavior of the local authorities. [Middle East Online, AFP, 6/25/13]

Qatar’s emir announces transfer of power to son Sheikh Tamim
Qatar’s Sheikh Hamad bin Khalifa al-Thani announced in a live televised address to the nation on Tuesday that he will transfer power to his son Sheikh Tamim. In a speech broadcast on Qatar state television, Sheikh Hamad, 62, said it was time for “a new generation to take over.” [Al-Arabiya, 6/25/2013]

Jailed Kurdish leader proposes next step in peace process
Kurdish leader Abdullah Ocalan said Tuesday that he has sent Ankara a proposal for the next phase in peace efforts to follow the withdrawal of rebel fighters from Turkish soil. Ocalan’s comments came in a statement after meeting with a delegation from the pro-Kurdish Peace and Democracy Party at the Imrali prison island off Istanbul. [Daily Star, Hurriyet, 6/25/2013]