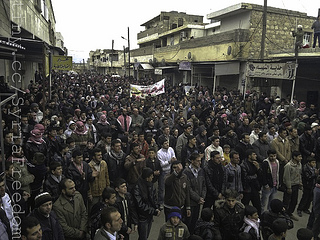 The United States eased restrictions on trade with Syria’s opposition Wednesday, in a move aimed at helping supply the critical needs of Syrians in "liberated areas."

Tamarod closes in on signature goal
The Tamarod campaign said on Wednesday that they are nearing their goal of fifteen million signatures on a petition expressing “no confidence” in President Mohamed Morsi. The movement has called for peaceful mass protests on June 30, including a march to the presidential palace, to demand early presidential elections.[Daily News Egypt]

Nour Party calls for ‘real’ reconciliation, warns Morsi over growing opposition
Egypt’s Salafi Nour Party has urged President Mohamed Morsi to respond to its initiative to resolve the burgeoning political crisis, as antigovernment opposition extends beyond party political lines ahead of June 30 demonstrations. The Nour Party’s initiative sets out plans for dialogue talks which guarantee mechanisms for upcoming parliamentary elections and electoral guidelines. According to the plan, Morsi would also have to accept any eventual outcome from dialogue, as promised. [DNE, Egypt Independent]

Foreign direct investment dries up
Egypt is seeing a mass exit of foreign direct investments (FDIs) amounting to around $140 million from about ten countries, according to a report by the General Authority for Investment and Free Zones. “Delayed completion of an economic reform plan which [puts]…the IMF deal on hold, coupled with the escalating conflict between judges and the ruling regime and the non-consensus cabinet reshuffle which put stability at risk is applying pressure on FDIs,” said economist Alia Mamdouh. [Daily News Egypt]

Government submits extra budget items to Congress
The government has asked the General National Congress to approve an additional LD 15.25 billion for urgent items that did not feature in its original budget. Congress is expected to vote on the requests on Sunday.The additional money would address compensation, urgent development projects, and the security situation. [Libya Herald]

Chaotic Libya struggles to maintain oil output
Libya is struggling to maintain its oil output stable as protests cut crude exports in the sector that supplies 95 percent of state revenue, clouding initial optimism over a speedy return to output levels of nearly 1.6 million barrels per day. The state oil company said that output had slumped to less than 1 million bpd following "irresponsible acts by some individuals" who shut down two export terminals and a major oilfield. [Reuters]

Zidan in Tunisia
Ali Zidan paid a one-day visit to Tunisia, his first since becoming prime minister last year. Accompanied by a senior ministerial delegation, he met with his Tunisian counterpart Ali Larayedh with whom he discussed the state of bilateral relations and regional affairs. The visit follows a major energy agreement between the two countries. [Libya Herald, AllAfrica]

Supreme Judicial Council gets new president
The Supreme Judicial Council (SJC) elected a new president and a deputy at its Tripoli headquarters. The former head of the council, Kamal Dahan, told the Libya news agency that it was the first time votes were cast using a ballot box to elect the chairmanship, making the council fully compliant with the law. [Libya Herald]

United Nations says 93,000 killed in Syrian conflict, fears for Aleppo
The death toll in Syria reached at least 93,000 at the end of April, but the true number of victims from the violence now in its third year may be much higher, the United Nations human rights office said on Thursday. An average of over 5,000 people have been killed every month since July, while the Damascus region and Aleppo have recorded the highest tolls since November, according to its latest study of documented deaths. [Reuters, Daily Star]

Rebels seize key army position in Hama, hit Damascus airport in rocket attacks
Syrian rebels seized on Thursday a key army position in the central province of Hama, which lies on the road linking Damascus to Aleppo in the north, a monitoring group said Thursday. The military responded by deploying en masse to try to take back the position at Morek and began shelling it, the Syrian Observatory for Human Rights added. Rockets also hit Damascus International Airport on Thursday in one of the first major rebel attacks on the facility near the Syrian capital in months. [NOW, Reuters]

Femen activists handed four month jail sentences for indecency
The three European Femen activists who staged a topless protest outside a Tunis court in May have been sentenced to four months jail terms for indecency and attacking public morals. The European Union expressed regret and urged the Islamist-led government to reform its laws on freedom of expression. [Middle East Online, France 24, Reuters]

Arab Electricity Union ready to tackle Yemen power shortage
The Arab Union of Producers, Transporters, and Distributors of Electricity on Wednesday expressed readiness to help Yemen overcome the existing power shortage. In a meeting with Prime Minister Mohammed Salem Basindwa in Sana’a today, Union Chairman Essa al-Kuwari said that the union is ready to provide all the expertise and assistance required to tackle the power shortage in Yemen. [Saba]

Bahrain arrests leading members of opposition youth group
Bahraini authorities announced they have identified and arrested leading members of the radical Shia opposition February 14 Revolution Youth Coalition, an influential clandestine cyber-group accused of links to Iran that has been the main force behind a Shia-led uprising to demand more rights from the ruling Sunni dynasty. [AFP]