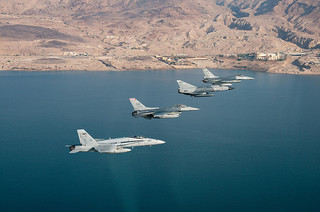 The United States will send anti-missile batteries and fighter jets to Jordan at the kingdom’s request to boost defense capabilities in the face of an attack from neighboring Syria, Jordanian officials said Wednesday.

Egypt demands Ethiopia halt Nile dam, upping stakes
Fearing the project will affect its main source of water, Egypt will demand Ethiopia stop building a dam on one of the main tributaries of the Nile, a senior government aide said on Wednesday. Meanwhile, the head of the Muslim Brotherhood’s Freedom and Justice Party (FJP) Mohamed El-Katatni told Al-Ahram on Wednesday that a military response to the dam project "cannot be taken without the consent and support of the Egyptian people." [Ahram Online, Ahram Online, Aswat Masriya]

Egypt’s FX reserves hit US$16.03b, highest since uprising
Egypt’s Foreign Reserves have recorded a remarkable rise of $1.6 billion to reach $16 billion by the end of June as compared to $14.4 billion last April, reporting its highest levels since 2011. [Amwal Al Ghad]

Court to hear Egyptian PM’s appeal on July 3
An appeals court has delayed hearing Prime Minister Hisham Kandil’s appeal against a one-year prison sentence and removal from his position until July 3. [Aswat Masriya]

Libya to move four state companies to Benghazi
Libya said on Wednesday three additional state firms and the state energy corporation would move their headquarters from Tripoli to Benghazi, in a measure intended to devolve more authority to the oil-rich region. The move may be a source of concern for foreign companies because of the fragile security situation. [Reuters]

Prime Minister calls for understanding, promises explanation of budget
Prime MInister Ali Zidan appealed to the Libyan public asking them to understand the scale of the challenges the current government faces. Zidan also announced that the finance minister would deliver a presentation on the budget to be broadcast live within a couple of days. [Libya Herald]

UK minister in Tripoli to look at practical support for reform
The UK Minister for the Middle East and North Africa Alistair Burt is in Tripoli for a two-day visit aimed at assessing how to support the Libyan government, particularly in the realm of security, the provision of public goods, and to launch a G8 initiative to support SMEs in the country. [Libya Herald]

Contracts worth $40 billion to be reactivated
Libya is poised to resume thousands of outstanding contracts worth tens of billions of dollars, said Jim Thompson, chief executive for AECOM’s International Government Services. The US-based international project management company announced it will return to Libya next month and work with the Housing and Infrastructure Board (HIB) to process old projects. [Libya Herald]

Golan frontier crossing changes hands between rebels and Syrian army
Syrian regime forces on Thursday retook the only crossing along the Israel-Syria ceasefire line in the Golan Heights after it was seized earlier by rebels, according to an AFP correspondent and a security source. Regime tanks were seen on the Syrian side of the Qunaitra crossing approaching the ceasefire line after clashes there between rebels and the Syrian army that involved small-arms fire and shelling. [NOW, Reuters]

Diplomats fail to set date for Syria peace conference
Seniors diplomats failed on Wednesday to set a date for a widely anticipated international peace conference for Syria amid continued disagreement over the list of participants. "It will not be possible to hold this conference in June," UN envoy Lakhdar Brahimi told reporters in Geneva, adding that the talks, which will be hosted by UN chief Ban Ki-moon, could happen "hopefully in July."  Brahimi met with Russian Deputy Foreign Ministers Gennady Gatilov and Mikhail Bogdanov and US Under Secretary of State for Political Affairs Wendy Sherman. [NOW, Al Arabiya]

Al-Qaeda leader Zawahri urges Syrians to unite against Assad, US
Al-Qaeda leader Ayman al-Zawahri urged Syrians to unite to bring down President Bashar al-Assad and thwart what he said were US plans to set up a client state in Syria to safeguard Israel’s security. In a 22-minute recording, posted on Islamist websites on Thursday to mark sixty-five years since Israel’s founding, Zawahri also said the only way to solve the Palestinian problem was through jihad. [Reuters, Nahar Net]

Idris: Syria rebels ready to move battles into Lebanon
Salim Idris, the commander of the Free Syrian Army, warned Wednesday that fighters seeking to oust President Bashar al-Assad could target Hezbollah in Lebanon if authorities failed to put a stop to the resistance group’s activities in Syria. “The fighters are ready to move the battles into Lebanon to confront Hezbollah members fighting alongside the Syrian regime forces,” Idris told the BBC.  [Daily Star]

National Constituent Assembly president opens talks with parties on constitutional dispute
Tunisia’s constitutional drafting saga unfolded further when Speaker of the National Constituent Assembly (NCA) Mustapha Ben Jaafer criticized an initiative to bring the constitutional drafting process before Tunisia’s administrative court. A number of NCA members resolved to take the matter to an administrative court, claiming that the Committee of Drafting and Coordination had overstepped its boundaries by independently modifying content of the constitution drafted within the NCA in the last eighteen months. [Tunisia Live, AllAfrica]

Femen activists denied bail; Islamists seek participation in trial
A Tunis court on Wednesday adjourned the trial of three European activists with the women’s protest group Femen to 12 June, ordering that they remain in detention, their lawyers said. The judge must decide at the next hearing on whether to allow several Islamist groups to participate in the trial as a civil party. [Ahram Online, Al-Arabiya]

Two Tunisian soldiers killed in hunt for Islamists on Algerian border
Two Tunisian soldiers were killed and four wounded in a landmine explosion near the Algerian border where security forces are pursuing Islamist insurgents, an army spokesman said on Thursday. The incident is the latest of several mine blasts in the remote area of Mount Chaambi, the focus of a hunt for Islamist militants since December. [Reuters, France 24]

Al-Qaeda steals government cars in Taiz
Car theft, particularly in Taiz, is a growing concern for security offficials. In the past three months, five cars—bearing government license plates—were hijacked by members of Ansar Al-Sharia, an offshoot of Al-Qaeda. [Yemen Times]

Yemenis bury remains of Houthi Group founder
Tens of thousands of Yemeni Shia Muslims buried the remains of the founder of an armed Houthi rebel group on Wednesday, nine years after he was killed in fighting with government forces. The Yemeni government turned over the remains of Hussein al-Houthi to his family earlier this year as a goodwill gesture to bolster national reconciliation talks. [Reuters, Yemen Times, Al Masdar, Mareb Press]

Seventeen revolutionary youth go home Thursday, five remain behind bars
On Thursday morning, seventeen out of twenty-two revolutionary youth who have been detained for the last two years were released. Late Wednesday night, the seventeen now-free men had voluntarily stayed imprisoned, in a show of solidarity with five other men who are still being held. [Yemen Times, Al Masdar]

US To deploy Patriot missile batteries, F-16s to Jordan
The United States will send anti-missile batteries and fighter jets to Jordan at the kingdom’s request to boost defense capabilities in the face of an attack from neighboring Syria, Jordanian officials said Wednesday. [AP]