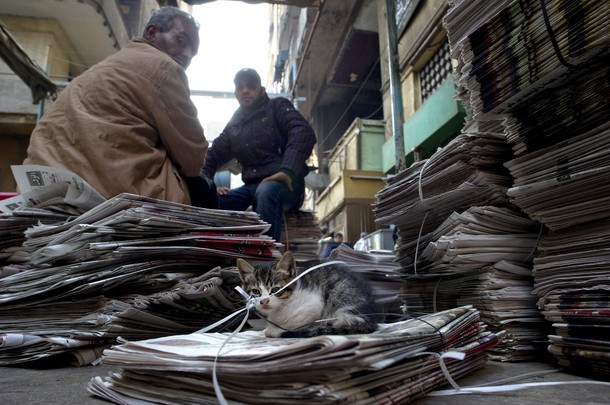 Egyptian Vice President Mahmoud Mekki has confirmed that the Justice Department is currently working on a framework for the establishment of an independent body to oversee media practices.

[Ahram Online, Egypt Independent, EGYNews (Arabic), Shorouk (Arabic) 8/27/2012] Presidential spokesman Yasser Ali on Monday revealed the names of President Mohamed Morsi’s presidential team, including four presidential assistants and 17 presidential advisors. According to the spokesman, the team will include six members of the Muslim Brotherhood (the group from which Morsi hails) – including two from the Brotherhood’s Guidance Bureau – along with two members of the Salafist Nour Party and an Islamist-leaning former presidential candidate. Essam El-Erian, one of those named for the team, announced that he would continue to be acting chairman of the Brotherhood-affiliated Freedom and Justice Party until elections for a new chairman take place.  (See main article for full list of names.)

Erian: FJP to vie for all parliament seats in next elections

[Egypt Independent, 8/27/2012] Acting chairman of the Muslim Brotherhood’s Freedom and Justice Party Essam al-Erian  said Saturday that the party would field candidates for all Parliament seats in the next elections. In a phone call with Mehwar satellite channel, Erian said that the FJP has the right to compete for all seats. He said the party leaders are also considering coordinating with other political parties for the elections. Erian demanded a mixed electoral system to be adopted for the next elections, combining both lists of candidates and individual candidates.

Constituent Assembly may scrap workers’ and farmers’ quota in Parliament

[Egypt Independent, 8/27/2012] The 50 percent quota for workers and farmers in Egypt’s Parliament — enforced for nearly five decades — is in the process of being scrapped from both law and history, as the Constituent Assembly moves towards the elimination of the populist provision, introduced by President Gamal Abdel Nasser in 1964. The move has been met with resistance from labor unions, agricultural federations, and human rights groups. Many workers, farmers, and activists perceive the action as the latest in a series of attacks on the rights of Egypt’s toiling classes.

Busy day for courts in Egypt

[Daily News Egypt, AP, Reuters, 8/27/2012] The verdict on the trial of Israeli Embassy protesters was read on Sunday in addition to the adjournment of the Port Said massacre trial and the trial of the men charged with stabbing a Suez man to death, in what was a busy day for courts across the nation. Seventy-five of the defendants linked to the assault on the Israeli Embassy received suspended one-year sentences Sunday, while one defendant tried in absentia was given a five-year prison term. The court listed eight charges, including "an assault against diplomatic missions" and "sabotage."

[Ahram Online, Egypt Independent, EGYNews (Arabic) 8/27/2012] IMF director general Christine Lagarde, who was presented with the $4.8 billion loan request during a visit to Cairo this week, said the lender "will accompany Egypt" as it undertakes its challenging journey of reform. The IMF chief said its support was to be accompanied by an Egyptian economic program incorporating fiscal, monetary and structural measures, which she said would require "determination" and "political courage." Some Egyptian commentators doubt that the new authorities could use this loan to sustainably improve the economic conditions of the population. After previous condemnation, the vice president of the Salafi Dawah group, Yasser Borhamy, said Sunday the interest on the loan Egypt is set to receive from the International Monetary Fund does not involve usury.

[Ahram Online, 8/27/2012] Egypt’s government will not be responsible for providing subsidised energy to 14 new cement factories, Hatem Saleh, minister of industry and external trade, told reporters on Sunday. Existing factories in Egypt will see subsidies gradually cut until the prices they pay for energy match those paid by the fourteen new ventures, Saleh said on Sunday at his first press conference as minister , where he laid out the ministry’s policy orientations for the upcoming period.

[Egypt Independent, Al Masry Al Youm (Arabic) 8/27/2012] A presidential delegation met with a number of extremist Islamists on Saturday in the Sinai city of Sheikh Zuwayed, Egyptian security sources told the German news agency DPA Sunday. The security sources said the meeting aimed to convince the groups to cease violent activities in exchange for ending a crackdown launched by the Egyptian authorities in Sinai. In related news, the Brahmins tribe in Rafah responded positively to Minister of Defense al-Sisi’s initiative during a previous visit to community leaders, and began handing over large quantities of weapons and ammunition to the Egyptian Army to encourage the rest of the tribes to to do the same for the sake of security and stability.

[Egypt Independent, 8/27/2012]A senior Muslim Brotherhood leader expressed his hope Monday that a new bill on civil society organizations will be passed, allowing the group to legalize its status and ending controversy over the issue. Saad al-Husseiny, former chairman of the now-dissolved People’s Assembly Budget and Planning Committee, said, "I believe the Brotherhood will immediately seek to legalize its position based on the new law."

[Daily News Egypt, 8/27/2012] Egyptian Vice President Mahmoud Mekki has confirmed that the Justice Department is currently working on a framework for the establishment of an independent body to oversee media practices. The newly-appointed Vice President told independent newspaper Al-Tahrir, “the trend is to remove these types of cases from prosecution or the courts, meaning that there will not be court summonses for journalists or an owner of opinion ever again, and journalists will not stand trial, and the preventive detention of journalists for crimes relating to publishing will be cancelled.”

[Reuters, 8/26/2012] Egypt’s foreign minister wants Saudi Arabia, Turkey, Iran and Egypt to meet for talks to work out how to end the Syrian crisis, Egyptian officials said on Sunday, a meeting that would include a regional ally as well as opponents of Damascus. Mursi put forward the plan at an Islamic conference in Saudi Arabia earlier this month. This week, he travels to China and then to Iran for a meeting of the Non-Aligned Movement, a group of 120 developing nations.