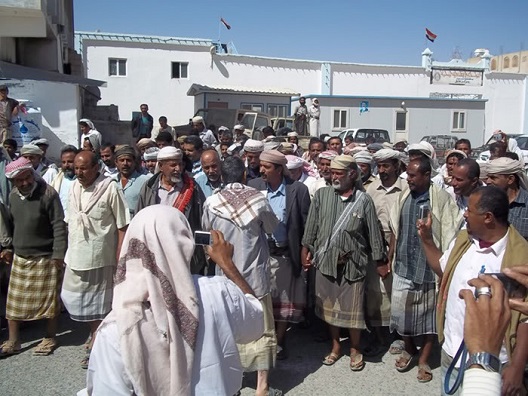 In April 2014, the Yemeni government launched an offensive against al-Qaeda in the Arabian Peninsula in the governorates of Abyan and Shabwa in South Yemen. Political actors, Yemeni citizens, intellectuals, and activists across the country supported the offensive and many celebrated it on social media. As of the second week of May 2014, President Abdrabbo Mansour Hadi announced that Shabwa and Abyan have been “cleared” of militants, adding that hundreds of them were killed in the offensive.

However, one could attribute the military’s success to negotiated agreements between local tribes and al-Qaeda in the Arab Peninsula (AQAP) militants, rather than the military offensive per se. When the military launched the fight against AQAP strongholds in the districts, several tribal meetings took place in the targeted area to announce their position vis-a-vis military operations. The statements published by the tribes of al-Awaleq, al-Kazemi, and al-Nu’man reflect major concerns that the offensive will further destabilize their areas. The tribes clearly stated that “they will not support any party to the [government-insurgent] conflict or those who are involved with them,” and that they “reject that their land become a war zone for any conflict.” Not only were the tribes reluctant to show any support for the military, but they also stated that they “don’t want any military presence, be it checkpoints or supply units.”

The tribes have taken a neutral position out of fear that the fight between AQAP and the military could destabilize their areas as it did in Abyan in 2011. Already more than 1000 families are displaced and living in need of urgent humanitarian aid. The Shabwa area suffers from longstanding conflicts and revenge killings, triggering concern among the tribes that counterterror efforts might exacerbate existing tribal conflicts. To mitigate the danger, southern tribes negotiated a deal with militant members to refrain from fighting the military in return for guaranteeing their safety. Al-Awaleq, one of the largest tribes in South Yemen, signed an agreement with al-Qaeda representatives stating just that.

Some might interpret the agreement as a reflection of tribal sympathy with al-Qaeda or a means to provide safe haven for the group. The reality is that tribal action is rooted in the larger structural and political context—specifically the Southern grievances. Tribes are reluctant to show support for counterterrorism efforts due to inherent distrust in the Yemeni government. The Nu’man tribe suggested such distrust when it called upon the Ansar al-Sharia militant group to leave their area to avoid “a pretext for the Yemeni military to bomb civilians.”

Beyond economic hardships or ideological reasons, the mounting political grievances in the South offer an excellent opportunity for to AQAP to thrive. More than two and a half years into the transition process, Southern grievances remained unaddressed. None of the articles in the twenty-point action plan that were aimed at addressing Southern grievances and building trust in the transition process have been implemented. Moreover, government security has used excessive force against peaceful protesters in the South. Appointments at the local level remain largely determined based on political affiliation and not merit. Corruption at the local level remains endemic.

The Yemeni government has failed to take any genuine steps to improve conditions in the South. More importantly, it has not implemented any real reforms towards improving governance. Reforms could have created hope among local citizens that the government could enact positive change and it would have encouraged many to support the transition. Many of those who took a neutral stance or aided AQAP did so, not because they sympathize with the group, but rather out of hopelessness and frustration with the government. Some protests brought Southern members and supporters together with al-Qaeda fighters to renounce Yemeni military activity in Abyan and Shabwa. The Southern movement is largely secular and non-ideological, but nonetheless, some will join hands with militants to celebrate an al-Qaeda victory against Yemeni forces simply as a defeat of the “occupation forces” of the North.

Many Southerners believe that both AQAP and corrupt officials—who back up the militants for political gain or simply sell weapons to them for profit—have infiltrated the military. In a statement, Saleh Fareed al-Awlaqi, a prominent tribal sheikh of al-Awaleq, a parliamentarian, and a Southern movement supporter, described the military offensive as a pointless game, dismissing the government’s claims of killing hundreds of militants. The Hadramawt Tribal Alliance questioned the absence of military and security forces when AQAP stormed Say’un on the eve of May 23, 2014. The statement said, “It has become clear that the power holders who steal the wealth of Hadramawt are behind terrorism,” accusing powerbrokers in Sana’a of corruption and compliance. In a follow up statement, the Alliance accused the leader of the First Regional Command in Hadramawt of involvement in aiding AQAP in Say’un. Many Southerners also believe that senior commanders in the military have tried to obstruct the military offensive and have conspired to assassinate Brigadier Mohammed al-Sabeihi, head of the Southern Command of the Yemeni Army, who leads the offensive against insurgents. Whether or not the allegations are true is debatable, but they certainly resonate with many people in the South and reflect a tremendous lack of trust in and frustration with the counterterror effort, in general, and the central government and power-sharing partners in Sana’a, in particular.

Yemen cannot defeat AQAP through military action alone. Without substantial political reforms, counterterror operations will only raise tensions, aggravate conflicts, and deepen distrust in the government and the transitional process. The debate as to whether the tribes support a war against al-Qaeda is not relevant. Even if all the tribal leaders support the offensive, they cannot change the conditions that led to their members joining the extremist group—and it is certainly understandable that they would not risk their fragile social order for a government they distrust.