On July 25, Tunisians return to the polls for a historical vote: a referendum on whether to repeal the democratically-drafted constitution of 2014 and replace it with a new charter immaculately conceived by President Kais Saied.

The date isn’t a coincidence. On July 25, 2021, Saied engineered what has been dubbed a “constitutional coup.” Claiming to act under Article 80 of the constitution, which allows the president to take exceptional measures in case of “imminent danger threatening the nation’s institutions or the security or independence of the country,” Saied took sweeping decisions, which effectively dismantled the rule of law in Tunisia. He suspended parliament and lifted immunity from MPs, appointed a new government, took control of the judiciary, issued unlawful travel bans, and replaced officials in national and regional governments, security agencies, and other bodies.

Although matters have become much clearer now, from the beginning, many denounced the move as being more of a coup d’état than a constitutional procedure. Among them were prominent constitutionalist Yadh Ben Achour, a member of the United Nations Human Rights Committee and president of the post-2011 Higher Political Reform Commission, and Moncef Marzouki, who served as interim president during the post-revolutionary phase. Due to his appeal to France to stop supporting the illegitimate government, Marzouk has been sentenced to four years in prison in absentia.

It’s worth noting that Article 80 requires the involvement of the head of government and of the speaker of parliament, as well as parliament in “continuous session,” and a review by the constitutional court after thirty days. Clearly, none of these conditions were met since last July, and the fact that the constitutional court never came into existence certainly doesn’t mean that its role as a guarantor becomes redundant.

The fact that Saied wasn’t exactly a champion of liberal democracy should have already been clear during his 2019 electoral campaign, as he adamantly opposed some of the key reforms proposed by the Individual Freedoms and Equality Committee (COLIBE)—a body created by late President Béji Caïd Essebsi to make existing legislation on individual liberties compliant with the 2014 Constitution.

Among those reforms, equality in inheritance rights between men and women was actually making concrete steps up the legislative ladder thanks to Essebsi’s support—before being hastily dismissed by Saied on grounds of not being in line with sharia law. Saied further spoke in favor of resuming the death penalty and against decriminalizing public display of affections between unmarried couples, as well as homosexuality. The president even went as far as calling LGBTQI Tunisians “deviants” acting as a Western fifth column to “corrupt the Islamic nation.”

These positions are worth remembering now that Saied is portrayed, by admirers and detractors alike, as the bête noire of Islamists, and of the Ennahdha party in particular. Ideologically, his adamant conservatism and his populist appeal to religious rhetoric situate him in the Islamist camp (if the term is understood to mean an ideology that seeks to transfer religious precepts into legal and social realms). Thus, it’s no surprise that Ennahdha actually backed him in the run-up to the 2019 presidential elections.

On this front, the more secular character of Saied’s new constitutional project, with the removal of the reference to Islam from Article 1, is only a façade, as Article 5 positions Tunisia as part of the “Islamic umma” and calls on the state to “implement the goals of Islam, namely the preservation of the human entity, honor, money, religion, and freedom.” The text, furthermore, maintains the requirement for the president to be a Muslim and introduces the problematic duty of the state to ground education on the “Arab-Islamic identity,” which has been denounced as a further departure from the secular education system established by Tunisia’s first president, Habib Bourguiba.

In other words, getting rid of Islam in Article 1 seems like yet another populist move to boost the president’s credentials in the anti-Islamist camp, with no real secularizing potential. But this is a secondary aspect when compared with the destruction of the rule of law that the charter portends.

If implemented, the new constitution would grant nearly unchecked powers to the president, who would be able to propose new legislation with precedence over the parliament’s own, approve state budgets, dissolve the parliament, and appoint a government not subjected to parliamentary confidence, which only a two-third majority of lawmakers could dissolve. All of this would happen in the absence of concrete checks and balances or impeachment mechanisms.

Moreover, elected Members of Parliament would share their power with a newly-created second chamber, known as the Council of Regions and Districts, with tasks that are unclearly defined and whose members are to be elected by regional and local councils. This departure from a classical representative democracy is not new for President Saied, who has not hesitated to define the parliament as a “danger to the state.” The attack to the rule of law is so blatant that even Sadok Belaïd, who chaired the commission for the first draft of the constitution to be delivered to the president, has disavowed the final text rewritten by Saied, affirming that it paves the way for a dictatorship.

In fact, the drafting commission itself was part of the problem, as the drafting process lacked basic requisites for democracy, transparency, and procedural guarantees. The contrast with the constituent process that led to the adoption of the 2014 constitution couldn’t be more striking. This was a lengthy and troubled endeavor, which was undertaken under public scrutiny by a constituent assembly elected through free and fair elections in 2011, and with the key involvement of civil society (led by the Tunisian National Dialogue Quartet, whose effort earned it the 2015 Nobel Peace Prize). Conversely, the new draft has been written hurriedly behind closed doors by a consultative body of unclear composition authoritatively appointed by the president—in clear violation of domestic and international law. Finally, public participation has been confined to a merely consultative “online survey” that saw as little as 7.5 percent of the electorate participate.

The next step is the July 25 referendum on the draft. No threshold is needed for it to pass. Furthermore, as the transitional provisions state that the constitution “shall enter into force as of the date of the final announcement of the referendum result by the Independent High Authority for Elections,” the result could be understood as merely redundant. At any rate, a fair result could hardly be guaranteed, after Saied illegitimately renewed the entire membership of the Independent High Authority for Elections to meet his tastes.

Following another key rule of the dictator’s handbook, President Saied has promised a utopia. In the new Tunisia, Saied claimed that “there will be no misery, terrorism, famine, injustice, or pain.” Unfortunately, history has shown that utopias promising heaven on earth have the tendency to turn into living hells. Will the democratic aspirations so bravely and steadfastly manifested by Tunisians win this ultimate battle?

Tommaso Virgili is a postdoctoral research fellow at the WZB Berlin Social Science Center, and a research associate at the Wilfried Martens Centre for European Studies in Brussels. 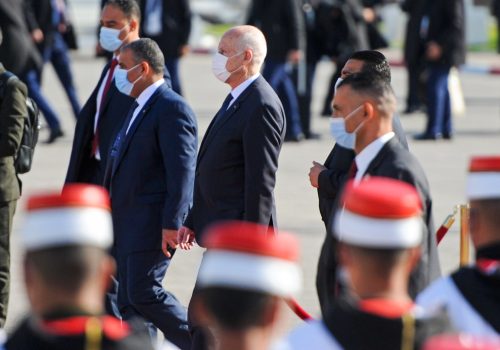 Tunisia has a referendum on July 25. Few have as much stake in it as Algeria does.

Algeria has invested in Tunisia's stability for years, providing it with cheap natural gas, governmental loans, and other bilateral support. 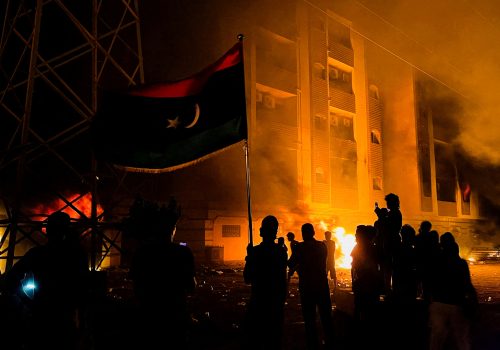 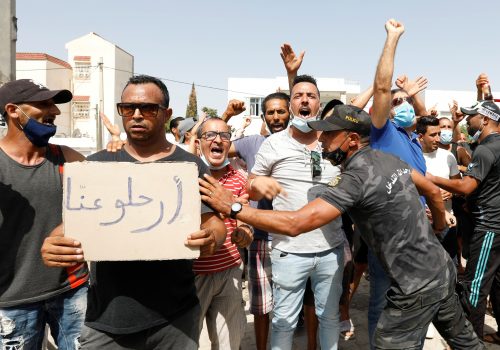 Image: Supporters of the Abir Moussi of Free Constitutional Part demonstrates against the referendum in front of the headquarters of the High Elections Authority (ISIE), at lac 2 in Tunis, Tunisia on July 07,2022. (Photo by Yassine Mahjoub/NurPhoto)