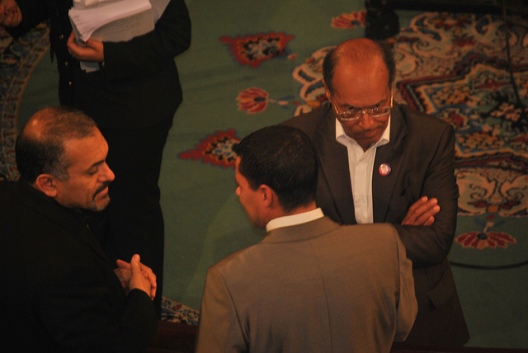 After weeks of negotiations and accusations traded between Tunisia’s political parties, Ennahda finally signed a political agreement dubbed the “quartet’s initiative” with twenty other parties last Saturday. Tunisia’s stalled political transition appears to be ending with this agreement, which marks the launch of a national dialogue to achieve two main objectives: The formation of a new caretaker administration in three weeks and the adoption of a new constitutional draft by the National Constituent Assembly (NCA) within four weeks.

Upon completion of the deal, most of the main political figures in Tunis expressed their enthusiastic support and hope for the dialogue’s success. Tunisian interim-President Moncef Marzouki announced, “the recent crisis makes me very optimistic about our future and the longer term. Yes, I am more convinced that we will achieve the political consensus, we can complete the constitution, the appointment of the Independent Electoral Commission, the date of the election law, and the appointment of government.” Clearly, Tunisia’s political forces, starkly aware of the tumultuous path of their neighboring transitional Arab countries, have placed their hopes that the dialogue signals the debouche from the political crisis between the ruling party and the opposition. However, many factors are threatening this commitment.

A day after the parties adopted the agreement Ennahda’s central governing committee, the Shura Council, caused concern among opposition party members when it released a statement saying the “interest of the country requires that the present government continues the management of the country’s affairs until the end of the National Constituent Assembly (NCA) mission.” To some this appeared to exclude the obligatory resignation clause included in the agreement, fueling worries about Ennahda’s commitment to the transition of power.

The agreement’s self-imposed time constraints are another cause for concern as they may be too aggressive for its complicated goals. From the start of the national dialogue, the NCA has: one week to nominate an independent prime minister (who would then have two weeks to form a cabinet), one week to select members for the Independent High Commission for Elections, two weeks to adopt an electoral law and schedule the elections, and four weeks to ratify the new draft of the constitution by a two-thirds majority vote. It remains unclear what the consequences of missing these deadlines would entail.

Another problem threatening the agreement’s success is Congress for the Republic (CPR) President Imed Daimi’s refusal to sign the initiative. CPR (along with Ettakatol) is a member of the Troika, the current ruling coalition led by Ennahda, Its ministers, therefore, reserve the right to refuse other coalition ministers’ resignations as mandated in the agreement. Hoping to avoid any last-minute defections, Ennahda and the other twenty signatory parties of the agreement invited CPR and the other two non-signatories to join the dialogue sessions later this Saturday.

Over the coming days, Ennahda and the opposition parties will negotiate particularly sensitive issues such as the choice of the prime minister and the structure of the relationship between the state and other public authorities, primarily that between the NCA and the expected caretaker government. The NCA, dominated by Ennahda members, will likely remain steadfast in its demands to remain the most powerful institution in the country, autonomous from and superior to the caretaker cabinet. The opposition, on the other hand, will strenuously argue for the type of controls over the NCA that seek to restore the balance of powers between the two bodies.

Tunisia has chosen an ambitious and perhaps overly optimistic roadmap, given the immense challenges to implementation presented above. However, the decision by different parties’ to engage in a national dialogue and at least attempt to achieve a lasting consensus far surpasses the choices made in other Arab spring countries that have resulted in diminished democratic potential. Ennahda may only choose to leave the executive when it can guarantee its powerful role within the NCA, set its terms for the elections law, and schedule elections to its political advantage, but the group’s willingness to compromise holds promise for the future of Tunisia.