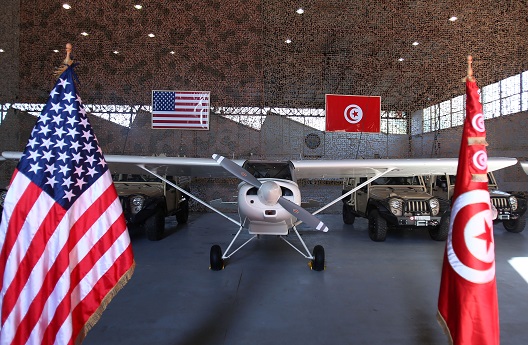 Although Tunisia is still seen favorably in Washington, the US is unlikely to be its savior. No matter how much Washington reflects on Tunisia as a successful democratic transition, the mood in the US capital will not lead to large amounts of aid to magically fix Tunisia’s security and economic woes. Only by looking to itself can Tunisia complete its democratic transition.

For some in Washington, and the West more broadly, Tunisia is a reminder of an “Arab spring” that could have been. For others, it is the only vindication of America’s over-optimistic expectations from the uprisings that have rocked the Middle East and North Africa since 2010. In no way, however, does Tunisia’s experience justify the past eagerness to make rash generalizations about an implausible Arab democracy domino effect.

Even Tunisia’s President Beji Caid Essebsi has since tried to dispel that notion. “There is no Arab Spring, just the beginning of a Tunisian spring,” he said.

Tunisia’s case, in the minds of most Westerners, is, in fact, a reminder—by contrast—of the wars, violence and devastation that have befallen many parts of the region after 2011.

So, naturally, the question that still comes to mind in America and Europe is: Why Tunisia and not other Arab countries?

The short answer is that, since independence if not since the 19th century, Tunisia underwent a different evolution than most other Arab countries. By 2010, its society had outgrown its political system, and it was only the reluctance of the then-rulers to introduce real reform that invited revolution. In other Arab countries, no such conditions prevailed, and foreign intervention and violence could not make up for their absence. They could only make things worse. And they did.

As it forges on today, Tunisia is not out of the woods yet. It has yet to find a way to restart its stalled economy, provide opportunity to its discontented youth, and shield the country from terrorism.

Washington’s experts and officials are aware of the many challenges Tunisia faces.

But Americans, like Europeans, are too consumed by their own domestic concerns to consider any major economic support initiative. The West does not do Marshall plans anymore.

It is true that virtually all US politicians and experts want Tunisia to succeed. But you will have to look hard to find anyone who is enthusiastic enough for its success to advocate footing the bill for the country’s socio-economic challenges.

It is hard to generate enthusiasm for a country whose peaceful democratic transition is likely to remain a regional “anomaly”—one small island of relative success amidst a sea of chaos.

One can still detect traces of President Bush’s “Freedom Agenda” and its successor narratives in Western discourse. But, increasingly, in the current contexts of strife and turmoil, policymakers in Europe and the United States are settling for a more realistic Middle East endgame where the goals are simply ensuring peace and security.

Although Tunisia’s transition may be at the core of the debate about US involvement in the Arab world, the nature of the debate has changed in recent years. There seems to be an undeclared yearning for strongmen, which cuts across segments of the political classes in the West, not to mention parts of the Arab region itself.

The West’s Libya policy is the best illustration of this trend. The priority for the US and European powers seems to be to find “someone or something” that can limit the risks of illegal immigration and jihadist spill-overs.

Many Libyans, also, want “someone or something” that can make their lives liveable. Right now, the citizens of Libya—and probably also Syria, Iraq, and Yemen—are survivalists, not democrats.

Western democracy advocates are also disappointed that a successful democratic transition has not proven to be the antidote to extremism and terrorism. Hence the inability to understand how a promising Nobel-Prize winning democratic model can also be an exporter of jihadists.

The reality, however, is dawning upon all.

As America and the rest of the West have all but overcome their wishful thinking that the Tunisian experience could somehow be duplicated across the region, Tunisians are slowly weaning themselves from the notion that the West will eventually come through with the level and type of assistance that saves the day.

Tunisia cannot wait for America and Europe to bail it out, nor should they. The risk that Tunisia would be seen as just a feather in the previous US administration’s cap—a risk politically-involved Tunisians are aware of—could affect its perception by the Trump administration. Although Tunisia has a long road ahead of it, the country can reach safe harbor by relying on the power of its own engines, certain caveats notwithstanding.

It behooves Tunisia’s political class to focus their energies on winning the battle of the socio-economic transition, rather than shortsighted political infighting. And that’s a winnable battle.

Sustainable recovery in Tunisia cannot take place, however, without a permanent settlement of the Libyan crisis, and that is where a more serious and focused US contribution to the international effort aimed at reaching a final settlement in Libya would go a long way towards aiding Tunisia. The US is providing support to the UN initiative led by Lebanese mediator Ghassan Salame. Washington is also likely to act if ISIS rears its head in a big way in Libya once again. A recent Middle East Institute opinion survey showed that 82 percent of Americans continue to support US engagement in the fight to defeat ISIS.

Even if the US did get more involved in Libya due to ISIS, it is unlikely to get involved in a way that contributes to resolving the broader conflict. As it did with Operation Odyssey Lightning in 2016, and as it continues to do in Syria, its involvement will be largely military, and will separate military from a comprehensive plan to resolve the broader war.

A solution in Libya would bring peace to Libyans and better security to Europe. It could also mean more secure borders, more jobs, and more business and trade opportunities for Tunisia. “We estimate that the Libyan crisis may have contributed 24 percent to the overall drop in Tunisia’s growth over the five years from 2011 to 2015,” noted the World Bank in a recent report. The connection between socioeconomics and security should motivate the US and Europe to help. Neither fear nor wishful thinking should drive the West’s agenda regarding Tunisia.

But Tunisia cannot wait for the US or Europe to resolve Libya’s war. Because of regional and domestic factors, it will be an uphill battle before Tunisia’s political transformation can lead to an equally transformative socioeconomic change.  Success on the social and economic reform track will determine Tunisia’s chances for long-term security and stability as well as those of others in the Mediterranean.

The worst scenario that can unfold is that of benign neglect on the part of the West and utter disillusionment on the part of Tunisians. But, in all circumstances, the Tunisian spring will be the by-product of what Tunisians can bring to the table at the end of the day.

Oussama Romdhani is the editor-in-chief of the London-based The Arab Weekly. He is a former Tunisian minister of communications.

Image: A general view of military equipment offered to Tunisia by the United States, in Tunis, Tunisia, May 12, 2016. REUTERS/Zoubeir Souissi