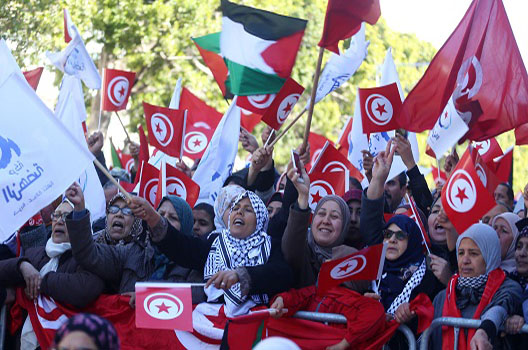 Seven years after the autocrat Zine El Abidine Ben-Ali fled, Tunisia civil society today is best characterized by its sheer courage. It is not blind, blunt courage, but sharp and calculated. What started as a popular movement of individuals taking to the streets to kick out a dictator slowly self-organized into non-profit organizations and political parties. Around 11,400 civil society organizations (CSO’s) formed after the revolution in 2011. These organizations work on everything from governance and accountability in the public sector, such as Al Bawsala, to protecting minority rights, such as Mnemty. Luckily, and unlike the government, these organizations exist all over the country too. I-Watch, another CSO, works to combat corruption in all four corners of Tunisia, and has several offices throughout the country. As protests break out to address economic woes, it’s important to remember that the development and evolution of CSOs in Tunisia since the 2011 revolution continues to play a vital role in the democratization of the state, and represents a foundational pillar in Tunisian society.

The impact of civil society is hard-hitting as it is effective, too. The government listens– most of the time. For instance, when the government of the United Arab Emirates issued a blanket entry ban on all female Tunisian nationals in early January, civil society groups did not hold back. The government came under severe pressure and ultimately responded by banning Emirates Airlines from landing on Tunisian territory. Another example is human rights groups publicly calling out forced rectal examinations that prosecute the homosexual community. The government formally accepted a recommendation at the UN Human Rights Council last September to ban the abusive practice in Tunisia. The most important example is the Tunisian National Dialogue Quartet, a group of four civil society groups that were instrumental in pulling the country through the political crisis of 2013 by building consensus across political groups. The quartet effectively paved the way for a peaceful transition by bringing groups together to draft a new constitution and start planning reforms. The group received the 2015 Nobel Peace Prize in recognition of its efforts.

However, starting in 2013, the civic space has shrunk considerably. On July 16, 2014, government authorities froze more than 157 CSOs on charges of financing terrorism. In November 2017, the government dissolved over 198 organizations and delivered 947 notices to others, referring them to courts on charges of “financial irregularities” or “receiving foreign funds to support terrorism.” The primary function of most organizations that were shut down was to provide aid and relief for orphans and the disabled.

More troubling still is the recent spate of arrests and prosecution of individual activists from various social movements. Today, the heart of the so-called Arab Spring is gripped by economic hardship; organized groups, notably from the Forum on Social and Economic Rights (FTDES), began protesting these economic hardships around a year ago. The most recent wave of protests started on January 7 after the government announced the various tax increases and subsidy reductions in its 2018 budget. Protests reached a fervor pitch this past weekend on the anniversary of the revolution on January 14. While international media was quick to cover the protests, at times exaggerating their size, the demonstrations do not compare to the mobilized masses of 2010-11. Furthermore, unlike the protests of 2010-11, these demonstrations are mainly organized by opposition-led political parties protesting specific government policies.

Rallies took place in at least ten different areas, including the capital of Tunis. Protests began peacefully but some clashes broke out between protesters and police. According to the Ministry of Interior, law enforcement authorities arrested over 806 demonstrators, drawing criticism from the United Nations High Commissioner for Human Rights (OHCHR) and other international rights groups. The OHCHR issued a statement on Friday reprimanding the arrests and calling on authorities to “to ensure that people are not arrested in an arbitrary manner and that all those detained are treated with full respect for their due process rights and are either charged or promptly released.” One death has been attributed to the protests, that of Khomsi el-Yerfeni. The cause of death remains unclear, as fellow protesters say he might have been struck by a police car, but the authorities deny this and claim that he had suffered from “chronic shortness of breath.” Authorities conducted an autopsy investigation, but the results have not been released.

Regardless of the protesters substantive demands, it is important for the government to keep in mind that Tunisia would not be where it is today had it not been for civil society work and vigilance. It is thanks to a strong and vibrant civil society of associations, labor unions, political parties, and other non-profit organizations that the country emerged out of the 2010-11 revolution in stable condition. These groups reconnected the relationship between citizens, the state, and society in a transitional period, supporting political settlements and reducing the potential for renewed conflict. As such, the role of civil society in Tunisia cannot be understated. Stifling its expression by arresting and detaining demonstrators only works to hinder–if not arrest–the country’s democratic transition.