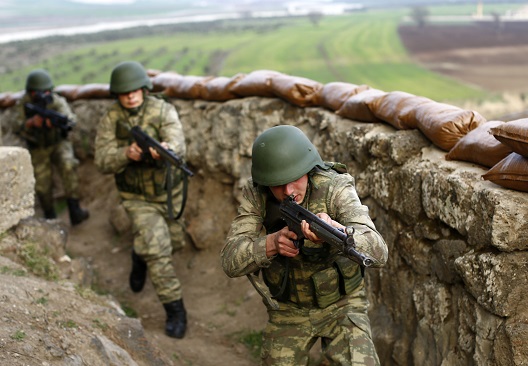 Russian and American action in Syria is fundamentally at odds with Turkish interests. The two international actors have both backed the People’s Protection Units (YPG), the armed wing of the Kurdish Democratic Union Party (PYD), in ways that harm Turkish interests. The PYD is the Syrian branch of the Kurdistan Workers’ Party (PKK), an insurgent group that has fought the Turkish government, first for Kurdish independence, and later for political autonomy.

On March 20, Redur Xelil, told Reuters that Russia had established a base in Efrin to “to help train [YPG] forces on modern warfare and to build a direct point of contact with Russian forces.” Russia has issued a clarification, suggesting that the deployment was to monitor a Turkish backed cease-fire between the YPG and Turkish backed groups. This statement, however, is at odds with Ankara’s own framing of the conflict in this area, and its frequent threats to use allied forces in the area to take territory from the YPG.

Russia has given support to the YPG in this area before, most overtly when its air force bombed Turkish backed rebel positions to facilitate the YPG’s taking of Tel Rifaat in early 2016. The Russian support for the YPG came in the months following the Turkish air force’s downing of an SU-24 bomber. The second order effects of the Tel Rifaat advance was the upending of US backed efforts to train and equip small Arab majority units, tasked with linking up with Turkish backed groups to march from Marea and Azaz to the Euphrates to close the “Manbij pocket.” The failure of the US Train and Equip program is often attributed to T&E groups turning over weapons to Syria’s al-Qaeda affiliate, the Nusra Front. The program, however, limped along until the Russian intervention and concurrent Islamic State attack nearly wiped out the groups in the area.  These interlinked events then prompted the US to support the SDF moving west of the Euphrates in violation of Ankara’s red-line. Further still, in post-conflict Manbij, the council left behind, while ethnically diverse, is linked to the PYD—and therefore part of the PKK’s broader structure.

This confluence of events prompted Turkey to send its own forces across the border to take al-Bab, a city some 40 kilometers from the Turkish border. The operation, dubbed Euphrates Shield, was coordinated with Russia, and required Turkish President Recep Tayyip Erdogan to make amends with Moscow following months of tense relations after the SU-24 shoot down. Moscow, in turn, further increased the pressure on Turkey during negotiations over the forced evacuation of east Aleppo. For Moscow, the goal has been to shape the Syrian opposition to create conditions favorable to the regime. This is not a difficult task. The Arab majority opposition is fractured, weak, disorganized, corrupt, and littered with Jihadist elements. Turkey’s active support for what was a Russian-imposed deal in Aleppo, helped change the trajectory of the Syrian civil conflict. Turkey, concerned about the concurrent empowerment of al-Qaeda in Idlib and the inevitable fall of Aleppo, sought to move elements of the opposition to Euphrates Shield territory. The intent was twofold: first, to overcome manpower shortages to sustain operation Euphrates Shield; second, to save the Syrian revolution by diverting opposition fighters from fighting the regime to fighting the Islamic State (ISIS, ISIL, Daesh) the latter fight which has more international support, and to force a separation of the Idlib groups from Syria’s al-Qaeda affiliate.

This moved in parallel to Russian and Turkish negotiations for the “Astana Process,” a trilateral effort with Iran to implement a nation-wide ceasefire. The United States was not directly involved, although Turkey did quietly keep relevant parties in Washington up to speed on the scope and intent of the talks. Astana, as it turned out, has helped to facilitate Russia’s shaping of the outcome in Syria in ways that is antithetical to Turkish interests. In preparation for the January 2017 meeting in Astana, the three sides reached an agreement on a nationwide ceasefire. The ceasefire froze conflict lines in much of the country, except for ISIS controlled areas, including outskirts of al-Bab, where the Turkish backed forces involved in Euphrates Shield had bogged down in a months-long effort to take the city from the Islamic State.

Russia played both sides of the conflict. It gave indirect support to the Turkish effort, while largely freezing regime-rebel conflict lines to allow the regime to focus on one front around al-Bab. Russian aircraft struck targets on the southern and western edges of the city, the outcome of which was to help facilitate the movement of regime forces to take Tadef and then extend control to the western bank of the Euphrates. Russia then reached an agreement with the SDF in Manbij to move regime and Russian forces in to a narrow ribbon, west of Arima. The United States, as part of a deterrent patrol, moved separately to place forces along the Sajur River. These two moves have blocked any further eastward expansion of Turkish controlled territory, leaving only the area from Azaz to Tel Rifaat as a front line open to a Turkish-backed assault. The YPG’s announcement of a direct Russian role in the area (and Russia’s affirmation that this was part of the nationwide ceasefire) seems to be part of broader effort to deter any further westward expansion of Turkish territory in Syria. Meanwhile, north of Raqqa, the United States is continuing to give support to the SDF and all signs point to a US-SDF led offensive to take the city from ISIS in the near-term.

The outcome of these Russian and American moves have profound consequences for Turkey. First, Ankara is overseeing a training program for forces in territory it controls in Syria. The program, now, will be feeding men into an area that is blocked from further expansion. With Turkish protection, northern Aleppo will continue to develop independent governing structures, strengthening the case for the devolution of power to regions in post-conflict Syria. This outcome, however, is at odds with stated Turkish policy, which is concerned about the Kurds gaining autonomy in northern Syria—and thus, Turkey has divergent military and political goals in Syria.

Second, after the fall of Raqqa, US attention will turn to the Euphrates River valley and stabilization options. The debate about how to stabilize Raqqa continues in Washington, but there is little doubt that PYD, as the dominant force in the area, will control key patronage networks. This will result in the deepening of PKK linked structures in northeastern Syria, an outcome at odds with Turkish interests.

Third, the regime, with Russian assistance, will continue its push east to Deir Ezzor, and will hit the Euphrates. The SDF, then, should be expected to negotiate with the regime, playing hardball with its broader goal of decentralization. Russia and the US, though holding opposing positions in Syria, have both signaled some willingness to decentralize the Syrian state to help stabilize the country. Any move to recognize what is already reality in northeastern Syria—PYD governance—is at odds with Turkish interests.

Fourth, the culmination of this outcome will be to legitimize the PYD as a recognized actor in Syria, which will allow for the group to win broader acceptance internationally. This will de facto result in a more overt PKK presence, particularly in Europe, where the group raises money from the Kurdish diaspora to help sustain its organization.

These four interlinked outcomes pose the greatest security crisis for Turkish policy makers since World War II. The threat, from a Turkish perspective, far exceeds that of the first and second Iraq wars, which helped to mid-wife the Kurdistan Regional Government. Russia is not a Turkish ally, but has been spared from public attack in Turkey because policymakers want to signal to Washington that it has options. Recent events in Syria clearly show the limits of this argument, and the effectiveness of coercive pressure to force Ankara to acquiesce to outcomes at odds with its own interests in Syria. There is a pathway to reconcile US-Turkish relations, but it requires swinging big on a messy policy involving Washington in Turkish-PKK peace talks. At the very least, Washington should consider offering support to Turkey for border security, up to including joint manned and unmanned surveillance flights along the border, to deter cross border skirmishes.

The Syrian civil conflict, now in its seventh year, is upending Turkish interests. Ankara is at odds with the two most consequential outside actors in the conflict and has few points of leverage to influence the near term in Syria. The consequences are considerable, but Turkey has few tools to change the fast-moving events in Syria.

Image: Photo: Turkish soldiers participate in an exercise on the border line between Turkey and Syria near the southeastern city of Kilis, Turkey, March 2, 2017. REUTERS/Murad Sezer