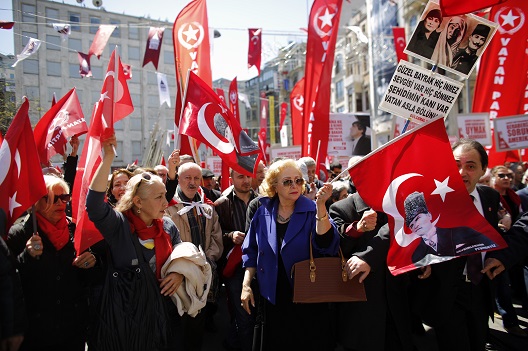 Only a decade earlier, it would have been an unimaginable sight. On April 24, more than a thousand people crowded Istanbul’s biggest pedestrian street to hold a vigil commemorating the centenary of the 1915 massacres of 600,000 to 1.5 million Ottoman Armenians. Amid songs and prayers, speakers referred to the killings by the label embraced by most historians but rejected by Turkey: genocide. A cordon of police officers, backed up by a riot vehicle, separated the crowd from a small group of Turkish nationalists who had come out to protest.

Though poignant, the scene was far from a genuine reflection of the wider Turkish debate on the events of 1915. To this day, a large majority of Turks continue to insist that their government has no business apologizing for the massacres. Only 9 percent believe it ought to acknowledge the killings as genocide.

What the image of ethnic Armenians, Kurds, and liberal Turks honoring the dead of 1915 side by side did show, however, was that the debate has been blown wide open.

For decades, the massacre of the Armenians had been less a taboo than a non-topic. The biggest obstacle to a free discussion of the killings was not necessarily intimidation, as a Turkish historian of the genocide recently told me, but indifference.

Thanks to a civil society that has grown increasingly assertive over the past fifteen years, a handful of historians, writers, and activists who have dared to speak up, and a government that has allowed them to do so, that indifference is now gone. The paradox of today’s Turkey is that you might face trial for accusing of Turkish President Recep Tayyip Erdogan of corruption or for sharing a satirical poem about him on your social media account, but not for referring to the Armenian killings as genocide.

At the social level, the discussion of 1915 has been largely freed from the shackles of nationalism. At the official and diplomatic level, Turkey appears to have taken a step back for every step forward.

On the one hand, Erdogan and the ruling Justice and Development Party (AKP) have made a series of unprecedented gestures aimed at reconciliation, both with Armenia, with whom Turkey is yet to establish diplomatic relations, and with their own country’s past. In 2008, then Turkish President Abdullah Gul traveled to Yerevan for a soccer match, paving the way for an agreement that foresaw an exchange of ambassadors and the opening of the shared border. (Pressure from Turkish and Armenian nationalists ultimately scuttled the deal.) In 2014, Erdogan’s government issued a statement commiserating with the families of those who perished a century earlier. This year, Turkey’s EU Minister Volkan Bozkir made history by becoming the first Turkish official to honor the victims of 1915 during a service at the Armenian Patriarchate.

Yet Turkey has continued to reject responsibility for the killings, defy calls for an apology, and reprimand any country that refers to the events 1915 as genocide, all at a significant price to its reputation abroad. Even Ankara’s closest allies have not been spared its ire. In the space of nine days leading up to this year’s centenary, Turkey’s ministry of foreign affairs issued communiqués upbraiding the European Parliament, Germany, Russia, and France.

In an interview in mid-April, Etyen Mahcupyan, an ethnic Armenian and until recently a top adviser to Prime Minister Ahmet Davutoglu, conceded that the government was trying to have it both ways. The decisive factor, he said, was domestic politics. “The nationalist rhetoric makes it possible for the government to use the other, conciliatory rhetoric as well,” he told me. “The balancing is the core issue here… Half of the [AKP’s] constituency is very conservative and nationalist. And they need those votes.”

He also warned that outside pressure for Turkey to acknowledge the genocide might be counterproductive. “Without calling [it] you can do anything in Turkey, but if you start calling it names then it becomes very difficult because it’s ideological, historical, and psychological,” he said.

In remarks published later the same day by a Turkish website, Mahcupyan himself jumped offside. “If you accept the events in Bosnia and Africa as genocide,” he said, referring to Turkey’s position on the massacres in Srebrenica and Rwanda, “it is impossible to call what happened to the Armenians in 1915 something else.” A few days later, he was to announce that he was no longer Davutoglu’s adviser, having passed the retirement age.

Leaving out factors such as genuine conviction and misplaced fears of possible reparations and territorial claims, no Turkish government is likely to bear the domestic cost of recognizing the genocide (whatever the diplomatic cost of denying it), at least not in the near future. On April 16, two of the three main opposition parties joined the AKP in drafting a statement condemning “biased” genocide claims by foreign actors. The Peoples’ Democratic Party (HDP), which has transformed from a pro-Kurdish party to the most progressive force in Turkish politics, was the only group to oppose the measure.

In the end, the words spoken by a former Armenian president, Levon Ter-Petrossian, may yet turn out to be true. “It is time to finally understand that by presenting ultimatums to Turkey or pushing it into a corner, no one can force it to recognize the Armenian Genocide,” Ter-Petrossian said in 2007. “I have absolutely no doubt that Turkey will do so, sooner or later. It will not happen before the normalization of Armenian-Turkish relations, but after the establishment of an atmosphere of good-neighborliness, cooperation, and trust between our countries.”

That atmosphere has not yet arrived. The rhetoric that accompanied the centenary of the 1915 massacres, both in Yerevan and in Ankara, has not helped. The fact that Turkey continues to index any political opening to a resolution of Armenia’s conflict with Azerbaijan over the breakaway region of Nagorno Karabakh, where the security situation is deteriorating, does not bode well, either.

The good news is that with the genocide centenary having come and gone, and with June’s parliamentary election in Turkey soon out of the way, the need for nationalist posturing may be on the wane, says Richard Giragosian, head of the Regional Studies Center (RSC), a Yerevan think tank. Opportunities for dialogue and engagement are likely to present themselves sooner or later. If Armenia and Turkey are ever to approach common ground on 1915, they should seize them.

Piotr Zalewski is a Turkey-based freelance writer. His work has appeared in TIME, Polityka, and the Financial Times, among others. Follow him on Twitter @p_zalewski.

Image: Members of the leftist Patriotic Party protest denying mass killings of Armenians by Ottoman Turks in front of the French consulate in Istanbul April 24, 2015. (Reuters)