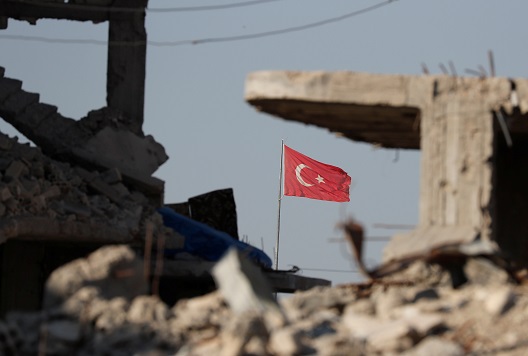 The Turkish government, along with Iran and Russia, met this week in Astana, Kazakhstan to discuss events in Syria and the enforcement of four-de-escalation zones spread across Syria. In the previous Astana meeting in September 2017, the three sides agreed on a plan to send up to 500 Turkish troops into Idlib to man checkpoints, as part of a broader effort to monitor a de-escalation of hostilities of most of the Syrian opposition and the Assad regime in the area. Turkey has assumed responsibility for the bulk of the opposition, presumably as part of a broader effort to protect these groups from regime bombardment and to establish a credible and united movement to negotiate with the regime.

Idlib is Syria’s most complicated battle space because Hayat Tahrir al-Sham (HTS), an umbrella group that Jabhat Fateh al-Sham (JFS) formed in 2017, is the dominant power in the area. JFS was the name Jabhat al-Nusra, Syria’s al-Qaeda affiliate, chose when it rebranded itself in 2016. JFS reportedly had a falling out with al-Qaeda’s leader, Ayman al Zawahiri, and broke from al-Qaeda central during this same time period. There is now a debate about whether HTS has broken with al-Qaeda central, and whether leadership fissures between inward looking “Syrians” and “externally focused al-Qaeda elements” means much for US policy interests.

Against this backdrop, the Turkish government has launched a dual-pronged effort to ideally try and turn elements of HTS against more hardline al-Qaeda elements as part of a broader effort to unite the broader insurgency against HTS hardliners. Ankara’s military deployment is aimed at capitalizing on fissures within HTS to try and minimize the extremist threat to Turkey, and to mold the broader insurgency into a force that is congruent with Ankara’s broader goals for the Syrian conflict. Turkish goals have moved well-beyond the toppling of the Syrian regime and are now squarely focused on preventing the break-up of the Syrian state, which would de-facto result in the empowerment of the Kurdish majority Democratic Union Party (PYD). The PYD’s militia, the YPG, is part of the US backed umbrella group, the Syrian Democratic Forces, that have been fighting the Islamic State (ISIS, ISIL, or Daesh) in eastern Syria. The YPG also dominate in Afrin, a T-shaped piece of territory along the Turkish border out towards Turkish controlled al-Bab in Northern Aleppo.

The Turkish deployments, to date, are along the high-ground on the southern end of Afrin. The deployment has allowed for the Turkish military to surround the YPG-held territory from all-sides, enabling Ankara to besiege the territory. The Turkish government also frequently threatens to invade Afrin, but has not, to date, deployed enough forces to do so.

Turkey’s fundamental concern with Kurdish empowerment in Syria is threefold: first, the SDF’s anti-ISIS bona fides has undermined a decades-long effort to isolate the PKK and to win support from western allies for military and intelligence assistance to target the group’s infrastructure and finances; second, and relatedly, if the SDF is recognized as a legitimate actor in Syria, and invited to future peace talks, the Syrian Kurds could gain some semblance of political autonomy; third, the strengthening of the SDF could embolden the PKK in Turkey, and in particular external support for the group’s demands for political autonomy in Turkey. The Turkish government is intent on pressuring the group; one tool to do so is to isolate and besiege areas like Afrin. These concerns explain why the Turkish efforts in Idlib remain focused on securing territory—with HTS consent—around Kurdish controlled areas, rather than moving between HTS and regime forces in southern Aleppo or northern Hama.

The Turkish deployment in Idlib has repercussions for short-and-long term American interests in northwest Syria. In the short term, Ankara’s actions allow Washington to kick the can down the road on a difficult policy problem; meaning that Turkey and the Russians are now on the hook for Idlib, leaving the Americans to focus on finishing the war against ISIS. The United States has an interest in denying al-Qaeda elements in the area safe-haven, from which external attacks could theoretically be plotted against Western targets. Yet, the area was also the centerpiece of the clandestine, now-cancelled $1 billion per year program to arm elements of the opposition to fight the Syrian regime. The program was intended to empower vetted opposition to put pressure on the Syrian regime, in order to compel the regime to make political compromises. The outcome of the arming effort failed to achieve this objective and was recently cancelled. The Turkish efforts, therefore, could be beneficial if they work as intended; meaning that they help to isolate hardcore al-Qaeda members.

However, in the longer-term, the deployment may pose problems for US interests. The fundamental problem is that the Turkish-Iranian-Russian agreement is premised on HTS acquiescence to the Turkish presence in Idlib. The Turkish government has made clear—in public and private—that the military deployment is not a combat mission. The Turkish military also enters and leaves Idlib under HTS escort, a rather potent symbol of the near-term decision to not directly fight the group. In an ideal scenario, Ankara would not have to fight—and instead, an isolated hardline HTS-linked cadre or group could be wiped out through an opposition led fight against the group.

But what if this does not work? The United States and Turkey, since 2012, have pursued policies to try and empower the non-al-Qaeda linked elements of the Idlib based insurgency. In 2016, the US increased its efforts to “demarble” the Idlib insurgency by separating out the moderate elements from the extremists through a mixture of coercion and compellence. These efforts have not been successful. In 2016, the US launched a series of successful strikes, intended to kill al-Qaeda veterans active in Syria fighting with HTS. These strikes stopped in late February 2017, amid on-going talks in Astana about the de-escalation zones. The three powers agreed to establish de-escalation zones in May, with the final agreement on Idlib coming in September. One outcome, for the United States, is that Russia now effectively controls the airspace over Idlib and can use deconfliction to prevent US airstrikes in the area. The argument is simple: Idlib is now a de-escalation zone, so air strikes should not be allowed.

The United States retains an interest in striking al-Qaeda related targets in Idlib. However, for now, this appears to be off the table, as concurrent efforts to turn the insurgency against al-Qaeda elements continue. The potential problem, of course, is that hardline elements in al-Qaeda know exactly what Turkey is trying to do and will not simply wait around for Ankara to turn the opposition against it. The Turkish effort could turn out to be successful, but the “and then what question” looms large: what are the longer-term plans to defeat an isolated and small group of al-Qaeda elements in a largely “demarbled” Idlib.

One option is to allow the regime to use military force to take back the province with Russian assistance. This would deny safe-haven to potential groups, but would exacerbate a core Turkish concern: thousands of refugees fleeing across the border. It would also be anathema to Ankara’s broader effort to spare the area from indiscriminate bombing and to negotiate a political solution on behalf of the opposition it now sponsors. The Turkish military could be called upon to fight HTS, but this entails the risk of blowback from sympathizers and al-Qaeda elements in Syria and in Turkey. Russia, in this scenario, could try and pressure the United States to share intelligence or cooperate on a joint air-campaign—a policy preference Moscow has long-pushed with interlocutors in Washington with no success.

Looking beyond the micro-dynamics in Idlib, the Turkish deployment of forces in Syria raises a series of policy challenges for the United States. The Astana process has empowered Moscow in Idlib. For longer-term US interests vis-à-vis al-Qaeda elements in Syria, the de-escalation efforts could give Moscow leverage over a sacrosanct assumption of post-9/11 US policy: air superiority in low-intensity conflicts to strike al-Qaeda leadership targets at will. Whether Ankara succeeds or fails in its efforts to mold the opposition, the United States will be impacted.

The Astana process and Turkish actions in Idlib add yet another layer of complexity for US policymakers to think about and plan for. The desire to wash one’s hands of the mess in Idlib is understandable, US interests—whether counterterrorism or maintaining a presence in the region—will likely force the US to remain involved.